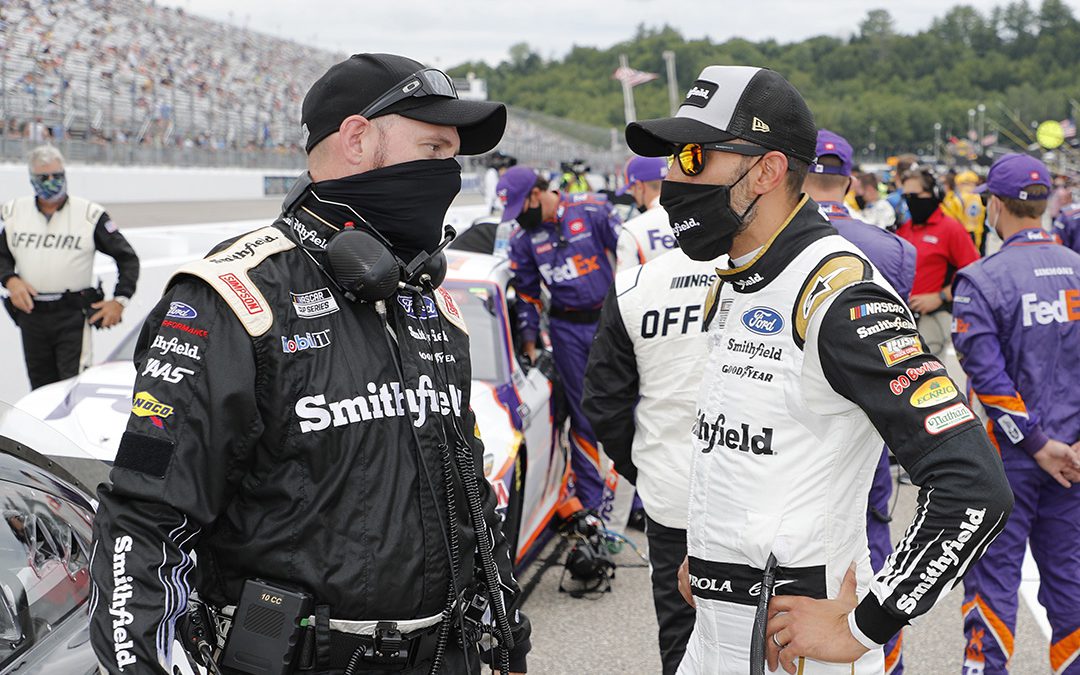 Stage 1 Recap (Laps 1-75):
● Aric Almirola started first and finished 10th to earn one bonus point.
● Almirola led the first two laps of the race.
● The No. 10 Smithfield Ford driver pitted during the lap-30 competition caution for four tires, fuel and chassis adjustments to correct loose-handling conditions.
● He restarted 17th with fresher tires than most of the competitors ahead of him.
● Almirola pitted on lap 63 for four tires, fuel and more chassis adjustments to restart 15th.
● He battled his way inside the top-10 before the stage concluded.

Stage 2 Recap (Laps 76-185):
● Almirola started eighth and finished fourth to earn seven bonus points.
● He pitted for four tires, fuel and adjustments on lap 96 to loosen the Smithfield Ford’s handling conditions.
● Almirola was scored fourth by lap 150.
● He pitted on lap 172 under caution for four tires and fuel to restart fourth, where he ultimately finished the stage.

Final Stage Recap (Laps 186-301):
● Almirola started fourth and finished seventh.
● Almirola pitted for four tires and fuel under a lap 204 caution and was demoted to 14th due to multiple cars staying out.
● He raced back to sixth by lap 263 and fell one position to teammate Kevin Harvick before the checkered flag waved.

Aric Almirola, driver of the No. 10 Smithfield Ford Mustang for Stewart-Haas Racing:
“Well the streak continues. Nine top-10s in a row. So proud of this Smithfield Hometown Heroes Ford Mustang team. We ran up front a little bit in the beginning and were just off a bit on balance of our car. It was a solid day. We continue to build a points gap back to the cutoff line to the guys in the playoffs and we just continue the consistency. One of these days we’re going to get us a win.”

● Almirola earned his 12th top-10 of the season and his fourth top-10 in 18 career NASCAR Cup Series starts at New Hampshire.

● This was Almirola’s ninth straight top-10, and it is the longest top-10 streak of his career. He finished fifth June 14 at Homestead-Miami Speedway, third June 22 at Talladega (Ala.) Superspeedway, third June 27 at Pocono (Pa.) Raceway, fifth June 28 at Pocono, third July 5 at Indianapolis Motor Speedway, eighth July 12 at Kentucky Speedway in Sparta, 10th July 19 at Texas Motor Speedway in Fort Worth, and sixth in the series’ last race at Kansas Speedway in Kansas City. His previous best streak was a run of six consecutive top-10s in 2019 that began with the second race at Atlanta Motor Speedway and lasted through the series’ seventh race at Texas.

● Since joining SHR in 2018, Almirola has never finished worse than 11th at New Hampshire. He earned his best career result at the track when he finished third in 2018.

● Almirola led once for two laps to increase his laps-led total at New Hampshire to 56.

● Brad Keselowski won the Foxwoods Resort Casino 301 to score his 33rd career NASCAR Cup Series victory, his third of the season and his second at New Hampshire. His margin of victory over second-place Denny Hamlin was 1.647 seconds.

● This was Ford’s series-leading 11th NASCAR Cup Series win of the season and its 697th all-time Cup Series victory.

● Twenty of the 38 drivers in the race finished on the lead lap.

● Harvick remains the championship leader after New Hampshire with an 81-point advantage over second-place Keselowski.

Next Up:
The next event on the NASCAR Cup Series schedule is a doubleheader Aug. 8-9 at Michigan International Speedway in Brooklyn. The FireKeepers Casino 400 starts at 4 p.m. EDT on Saturday, Aug. 8 and the Consumers Energy 400 begins at 4:30 p.m. on Sunday, Aug. 9. Live coverage of both will be provided by NBCSN and SiriusXM NASCAR Radio.