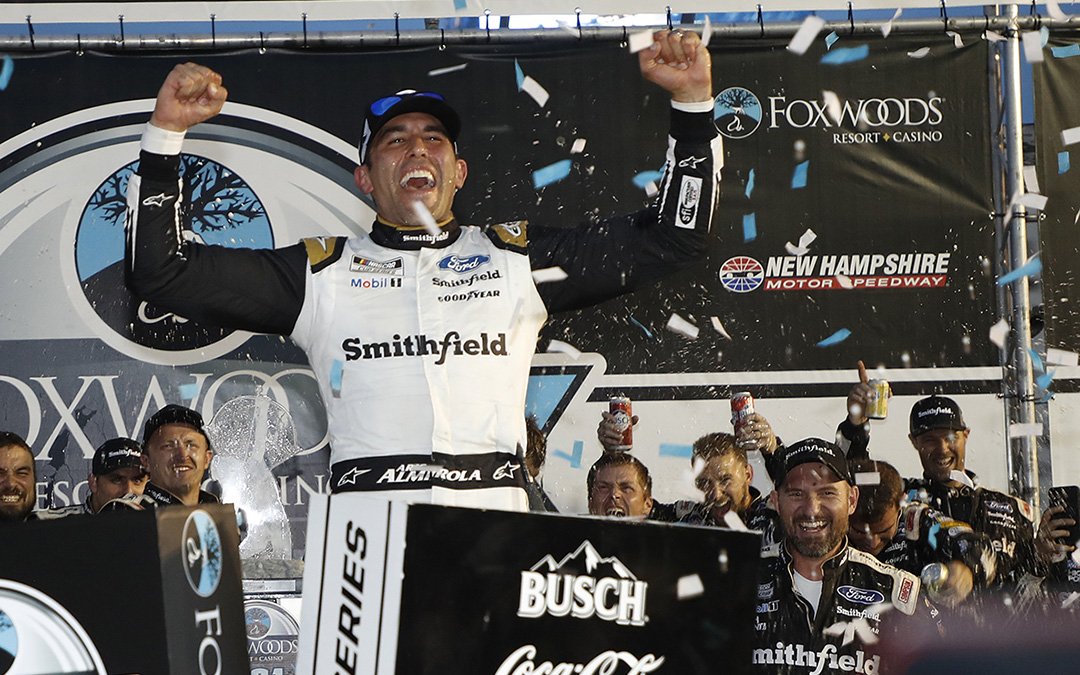 Stage 1 Recap (Laps 1-75):
●  Aric Almirola started 22nd and finished 14th.
●  The first six laps were run under green before a light rain moved over the track, causing the leaders to spin and bring out the caution on lap seven. An hour and 42-minute red flag period to dry the track followed.
●  Almirola opted not to pit during the caution period after the red flag was lifted. He was scored 15th.
●  Almirola raced to 13th before another caution was called on lap 33 whereupon pitted for four tires and fuel.
●  Almirola restarted 24th on lap 39 and battled his way to 14th to finish the stage
●  Almirola pitted at the end of the stage for four tires, fuel and chassis adjustments to help his racecar turn better in the corners.

Stage 2 Recap (Laps 76-185):
●  Almirola started 13th and finished fifth, earning six bonus points.
●  Almirola cracked the top-10 on lap 89.
●  The caution flag waved on lap 129 and Almirola was scored eighth.
●  Almirola pitted for four tires, fuel and chassis adjustments in a continued effort improving the car’s handling in the corners.
●  Almirola gained three spots on pit road and restarted fifth on lap 136, and he maintained that position through the end of the stage.

Final Stage Recap (Laps 186-293):
●  Almirola started fourth and finished first.
●  As the laps wound down, Almirola started to reel in the leaders, first passing Stewart-Haas Racing (SHR) teammate Kevin Harvick and then Team Penske’s Brad Keselowski.
●  Almirola spent a handful of laps dueling with Ryan Blaney for the top spot, eventually taking over the lead on lap 246.
●  Green-flag pit stops began a few laps later with Almirola making his own stop for four tires and fuel on lap 251.
●  Almirola regained the lead on lap 274 and held onto the top spot through the end of the race.

Notes:
●  Almirola’s victory in the Foxwoods Resort Casino 301 marked the 92nd overall win for SHR. It was the organization’s 66th points-paying NASCAR Cup Series victory, its first of the season and its sixth at New Hampshire.

●  This was Almirola’s third career NASCAR Cup Series victory and his second since joining SHR in 2018.

●  Almirola earned his first win of the season and his first victory in 19 career NASCAR Cup Series starts at New Hampshire.

●  The win punched Almirola’s ticket to the NASCAR Playoffs. It will be his fifth playoff appearance and his fourth in a row.

●  This was Almirola’s second straight top-10 at New Hampshire. He finished seventh in his prior visit to the track last August.

●  Prior to New Hampshire, Almirola’s best result this season was a fourth-place drive June 20 at Nashville (Tenn.) Superspeedway.

●  Since joining SHR in 2018, Almirola has never finished outside the top-11 at New Hampshire.

●  Almirola led twice for 25 laps to increase his laps led total at New Hampshire to 81.

●  This was SHR’s milestone 30th NASCAR Cup Series victory with Ford. The team won its first race with Ford in the 2017 Daytona 500 with former SHR driver Kurt Busch.

●  This was Ford’s 709th all-time NASCAR Cup Series victory and its fifth this season.

●  This was Ford’s fourth straight win at New Hampshire and SHR is responsible for three of them, as Harvick won in July 2018 and July 2019.

●  Almirola’s margin over second-place Christopher Bell was .697 of a second.

●  There were six caution periods for a total of 47 laps.

“This is, by far, one of my favorite racetracks. I love coming up to the New England area and racing. I love this racetrack. I had this race won a couple years ago and I gave it away. I lost it, and I’m so glad to win a race here with this race team. God is so good. We’ve been through so much and I’ve just stood the test and kept the faith. The team, everybody, they’ve just been working so hard.  Smithfield, Ford, Go Bowling, Pit Boss Grills, everybody, Honey Stinger, Shady Rays – there have been so many people that have just continued to support us through the crappiest year ever, and, man, this feels so good for them. My pit crew, they did a phenomenal job on pit road. All the guys that work on this car, they just keep fighting. They just keep digging, bringing the best race car they can bring every week. No doubt, we have struggled, but, guess what? We’re going playoff racing.”

Next Up:
The NASCAR Cup Series goes on a two-week summer break as broadcast partner NBC covers the Summer Olympics in Tokyo. It returns to action on Aug. 8 with the Go Bowling at The Glen road-course race at Watkins Glen (N.Y.) International. It starts at 3 p.m. EDT with live coverage provided by NBCSN and SiriusXM NASCAR Radio.