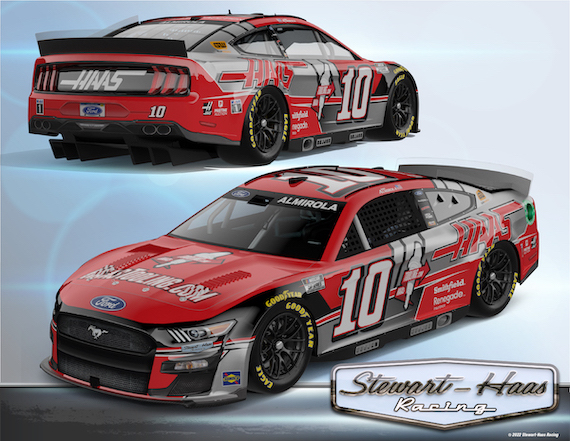 Notes of Interest
● After 16 races this season, Almirola is the only driver in the NASCAR Cup Series without a DNF (Did Not Finish). He has completed all but five laps of the 4,350 run this year – a 99.9 percent completion rate.

● 2021 marked the inaugural NASCAR Cup Series race at Nashville Superspeedway, which was new for most everyone involved. This weekend, Almirola and the No. 10 team will head back to the 1.333-mile concrete oval with a little extra confidence. Not only did Almirola earn the inaugural Cup Series pole at Nashville a year ago, but he piloted his No. 10 machine to a fourth-place finish after a string of terrible luck to kickstart his season at its midpoint.

● Almirola is one of the few drivers in this weekend’s Ally 400 field who has raced at Nashville Superspeedway in the NASCAR Xfinity Series and Camping World Truck Series. In four Xfinity Series starts at the track, Almirola has three top-10 finishes and one top-five with a best finish of fifth. In four Truck Series starts, Almirola has earned two top-10s and a top-five with a best finish of third.

● Points: Almirola arrives at Nashville 11th in the driver standings with 423 points, 113 out of first.

What is your outlook heading to a track for just the second time, and first in the NextGen car?

“Yeah I’m excited to get back to Nashville. Last year, Nashville was a big turning point for us. We went to a track that was new in the Cup Series for everyone and ended up getting the pole and a top-five. That gave us so much momentum because it was a terrible season up to that point. I have always felt good at Nashville. We’ve already shown what we can do at a new track in this NextGen car this year at St. Louis. This team is resilient and works their tails off to get the car where it needs to be when we show up at a new venue. On top of that, we’re going to get a full day of practice and qualifying, so we’ll have even more time to adjust.”

Where would you evaluate your season so far?

“We’ve had ups and downs, but there are a lot of positives to take away. Even last race at Sonoma, we had a plan and executed it. We finished 14th, but gained a ton of points and kept ourselves ahead of the playoff bubble. Drew (Blickensderfer, crew chief) and I have really connected and I hope we’re in the beginning of a hot streak heading into the summer.”