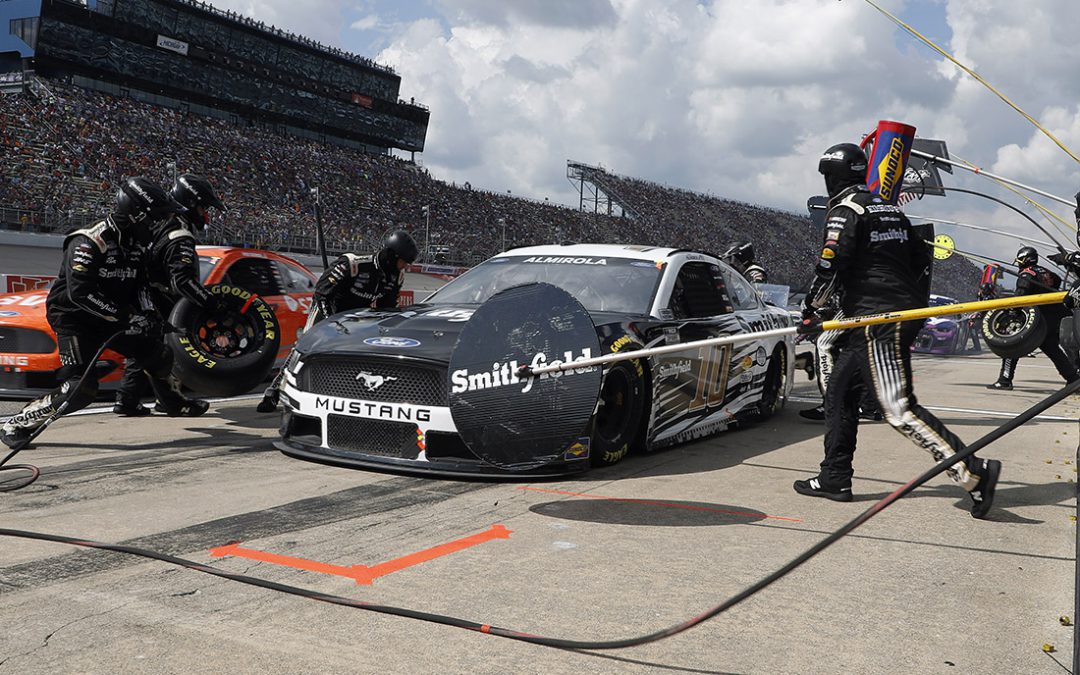 Stage 1 Recap (Laps 1-60):
● Aric Almirola started 23rd and finished 20th.
● Almirola fell out of the draft on the initial restart but drove back to his starting position just a few laps later.
● The Smithfield driver radioed his No. 10 Ford was “loose everywhere” as the tires became hotter.
● Almirola pitted for four fresh tires, fuel and adjustments during the competition caution.
● He came off pit road in 23rd and did not pit during another caution on lap 32.
● Almirola raced his way back to the top-20 before the stage ended. He pitted for four fresh tires, fuel and adjustments at the end of the stage.

Stage 2 Recap (Laps 61-120):
● Almirola started 15th and finished 17th.
● The Smithfield Ford driver reported loose-handling conditions early in Stage 2.
● Almirola radioed he had a vibration on lap 100. He pitted under green-flag conditions on lap 106 for four fresh tires, fuel and more adjustments.
● After green-flag pit stops cycled through, he was scored 17th, where he finished the stage.
● Almirola pitted at the end of the stage for four fresh tires and fuel.

Final Stage Recap (Laps 121-200):
● Almirola started 19th and finished 17th.
● The Smithfield Ford driver fell outside of the top-20 in the opening laps of the stage, getting no help from behind.
● Almirola pitted on lap 163 for four tires and fuel under green from 21st.
● After green-flag pit stops cycled through, Almirola was scored 19th.
● The caution flag flew for a brief rain shower on lap 179. Almirola pitted for four fresh tires and fuel four laps later and restarted 20th.
● Another caution flag flew for a multicar incident on lap 187. Almirola stayed on track and restarted 21st on lap 192.
● The Smithfield Ford driver picked up four positions over the final eight laps to the checkered flag.

Notes:
● Almirola earned his 14th top-20 of the season, his fourth in a row and his 13th in 18 career starts at Michigan.
● Ryan Blaney won the FireKeepers Casino 400 to score his sixth career NASCAR Cup Series victory, his second of the season and his first at Michigan. His margin over second-place William Byron was .077 of a second – the closest Cup Series finish in track history since the advent of electronic scoring in 1993.
● This was Ford’s 710th all-time NASCAR Cup Series victory and its seventh straight at Michigan.
● This was Ford’s series-leading 42nd win at Michigan, which is the most at any track currently on the NASCAR Cup Series schedule. Ford scored its first Michigan win with NASCAR Hall of Famer David Pearson on Aug. 17, 1969.
● There were six caution periods for a total of 29 laps.
● Twenty-six of the 37 drivers in the FireKeepers Casino 400 finished on the lead lap.
● Kyle Larson remains the championship leader after Michigan with a 28-point advantage over second-place Denny Hamlin.

“Our Smithfield Ford Mustang had the handling we needed after making some adjustments, but we just didn’t have the speed to contend up front today. We had to really play defense on the restarts and then hope our long-run speed gave us a shot to pass more cars. Ready to head to my hometown race to cap off the regular season in Daytona and gear up for the playoffs.”

Next Up:
The next event on the NASCAR Cup Series schedule is the Coke Zero Sugar 400 on Saturday, Aug. 28, at Daytona (Fla.) International Speedway. The regular-season finale starts at 7 p.m. EDT with live coverage on NBC and SiriusXM NASCAR Radio.