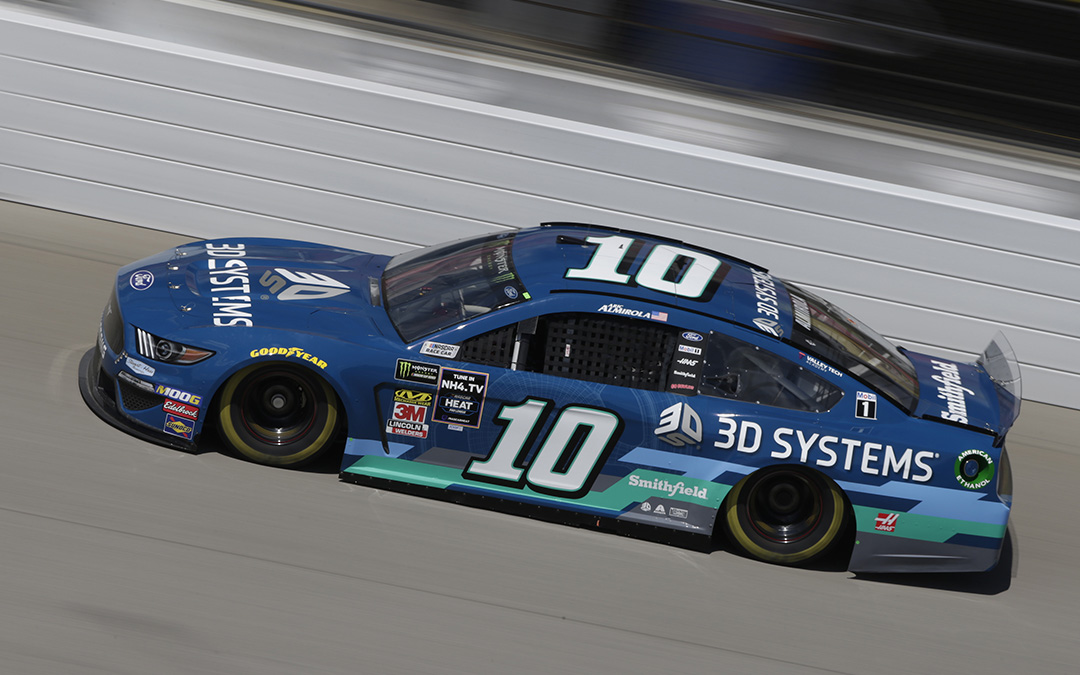 Stage 1 Recap (Laps 1-60):
● Aric Almirola started 12th and finished 10th, earning one bonus point.
● The No. 10 3D Systems Ford driver started Stage 1 with a loose-handling racecar, but it ran better after 19 laps.
● Almirola was scored in the 12th position on lap 40.
● After green-flag pit stops he was scored back inside the top-10, and just a lap later he pitted for two tires, fuel and adjustments to return to the field in 11th place.
● Before the stage ended he passed teammate Daniel Suárez to reenter the top-10.
● At the conclusion of the stage, he pitted for four tires, fuel and adjustments.

Stage 2 Recap (Laps 61-120):
● Almirola started 13th and finished 26th.
● He continued to report loose-handlng conditions at the beginning of Stage 2.
● On lap 84, he said the 3D Systems Ford started to tighen and run better in the turns.
● Almirola pitted on lap 112 for four tires, fuel and chassis adjustments.
● The caution was called on lap 117, and racing resumed with just one lap remaining before the checkered flag waved to end Stage 2.
● During the restart Almirola was involved in an accident that caused damage to the right front.
● He was able to drive the No. 10 Ford to his pit stall to assess the damage.
● During the stop, the No. 10 team was handed a two-lap penalty for too many men over the wall, ultimately putting Almirola four laps down.

Final Stage Recap (Laps 121-200):
● Started 34th and finished 33rd.
● On lap 112 under caution, Almirola pitted again to fix damage.
● Almirola held minimum speed for the remainder of the race and finished in 33rd, seven laps down.

Notes:
● Kevin Harvick won the Consumers Energy 400 to score the 67th overall win for SHR. It was the organization’s 53rd points-paying Monster Energy NASCAR Cup Series win, its second this season and fourth at Michigan.
● This was SHR’s 17th Monster Energy NASCAR Cup Series victory with Ford. The team won its first race with Ford when Kurt Busch captured the 2017 Daytona 500.
● This was Ford’s 39th Monster Energy NASCAR Cup Series victory at Michigan – the most at any track currently on the schedule.
● This is Ford’s fourth straight victory at Michigan. Joey Logano won in the series’ previous visit to the track last June. Clint Bowyer and Harvick swept the June and August races, respectively, in 2018 for Ford and SHR.
● There were six caution periods for a total of 24 laps.
● Twenty-four of the 38 drivers in the Consumers Energy 400 finished on the lead lap.
● Kyle Busch remains the championship leader after Michigan with a 20-point advantage over second-place Logano.

Aric Almirola, Driver of the No. 10 3D Systems Ford Mustang for Stewart-Haas Racing:

“We had decent day today before the accident. I’m not sure what happened there, but our guys worked hard to bring us a good 3D Systems Ford Mustang today. We still have a decent cushion right now for the playoffs. I’m looking forward to Bristol.”

The next event on the Monster Energy NASCAR Cup Series schedule is the Bass Pro Shops NRA Night Race on Saturday, Aug. 17 at Bristol (Tenn.) Motor Speedway. The race starts at 7:30 p.m. EDT with live coverage provided by NBCSN and SiriusXM NASCAR Radio.