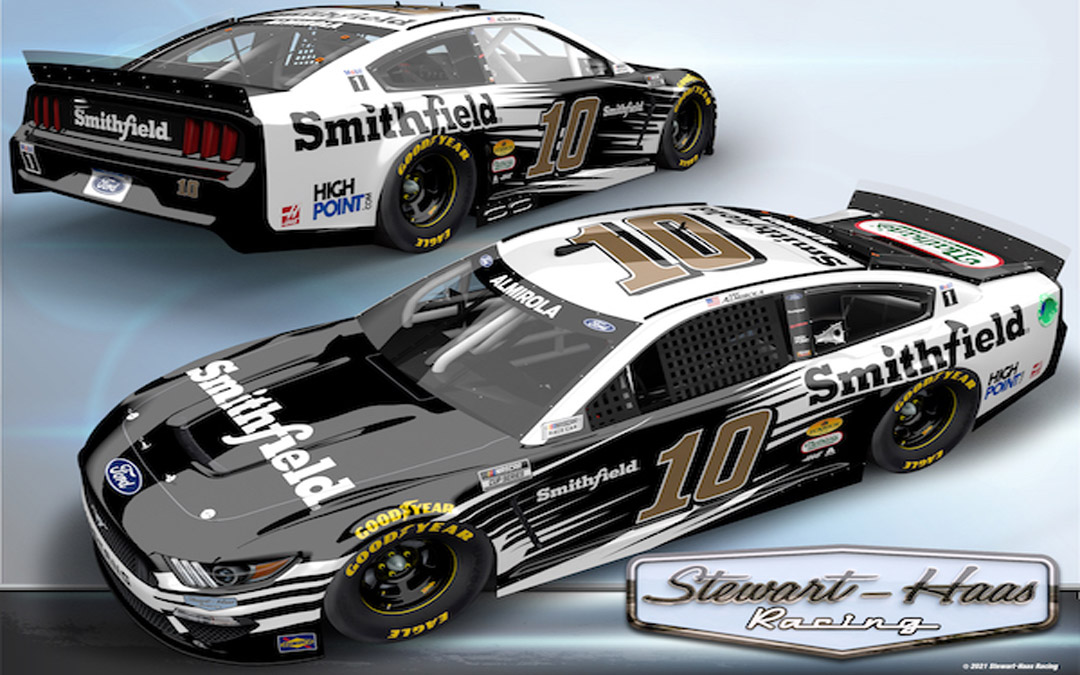 Notes of Interest
● Almirola is officially locked into the 2021 NASCAR playoffs. This is the fourth consecutive playoff appearance in Almirola’s four years at Stewart-Haas Racing (SHR) and fifth playoff appearance of his 12-year career.
● History at Michigan: In 17 NASCAR Cup series starts at Michigan International Speedway in Brooklyn, Almirola has two top-10 finishes and 13 laps led. He has three NASCAR Xfinity series starts there with a best finish of eighth and has one win in the NASCAR Camping World Truck series in only two starts. Last year, the speedway hosted its first doubleheader weekend. Almirola finished 16th and sixth in the Saturday and Sunday races, respectively.
● Crew chief Mike Bugarewicz is no stranger to visiting victory lane at Michigan. On June 10, 2018, Bugarewicz won the rain-shortened race with former SHR driver Clint Bowyer.
● Smithfield Foods celebrates 10 years of partnership with Almirola this season with a special campaign called Taste Victory. As one of the most active partners in NASCAR, Smithfield engages fans all year long by hosting a microsite that provides the opportunity to win when Almirola wins or finishes inside the top-10. When Almirola wins, one fan wins $10,000, and 10 fans win a gift card for each top-10 finish. The microsite also doubles as an Aric Almirola fan page and entertainment source where fans can get behind the wheel of the No. 10 Smithfield Ford with a custom racing game, and learn more about Almirola with fast facts, favorite recipes and custom content about his life on and off the track. Visit www.tastevictory.com to learn more. Thanks to Almirola’s Feb. 11 win in his Duel qualifying race for the Daytona 500 and his July 18 win at New Hampshire Motor Speedway in Loudon, two lucky fans have already won $10,000 each.
● On July 18 at New Hampshire, Almirola claimed the victory after leading 46 laps on the flat, 1.058-mile oval to earn his third career NASCAR Cup Series win. After a year full of adversity and bad luck, the victory put the No. 10 team, which was 27th in the standings and facing a must-win situation if it was going to compete for this year’s Cup Series championship, in prime position to earn one of the 16 coveted berths in the 10-race playoffs that begin Labor Day weekend. Almirola’s award-winning YouTube series “Beyond the 10” captured his entire race day here.
● Almirola’s 2020 season proved successful when he earned a career-high 18 top-10 finishes, six top-fives and led 305 laps. During the season, Almirola went on a five-race streak of top-five finishes and earned nine consecutive top-10s.
● Career Stats: Almirola has career totals of three wins, two poles, 26 top-five finishes, 82 top-10s and 893 laps led in 376 NASCAR Cup Series starts.
● Beyond the 10 YouTube Series:In 2021, Almirola continues to share his life beyond the No. 10 Ford with season three of his award-winning YouTube series. Fans and media can subscribe on YouTube to see Almirola’s personality on and off the track. Episodes have already featured life as a dad, a husband and an athlete, and it gives fans a unique perspective on what goes on in the life of a professional NASCAR driver. Fans can also follow Almirola’s social media channels: @Aric_Almirola on Twitter and Instagram, and @AricAlmirola on Facebook. Almirola’s latest Beyond the 10 episode addresses the question “are NASCAR drivers athletes” in honor of the Olympic break.
● After the season’s first 24 points-paying events, Almirola and the Smithfield Ford team sit 14th in the playoff standings with 416 points, 537 behind leader Kyle Larson.

How does having a win under your belt this year change your mindset heading into the race weekend?
“It changes everything because now we are showing up to racetracks wanting to win versus having to win. There is a big difference in that. There is a lot of pressure when you show up to races and feel like your only shot is to have to win. We were that way for the last several months. To be able to pull off a clutch win like we did at New Hampshire, and to get that victory and now have the rest of the regular season going to racetracks with just the desire and want to win is a big change. It is nice. It makes it more fun to go to the track.”

You’re officially locked into the 2021 NASCAR Cup Series playoffs. What does that mean to you after such a crazy year?
“Man, if you look back at the year we have had, being in the NASCAR playoffs is everything. I relate not getting into the playoffs like not getting picked on a team to play pickup basketball when you’re back in school. You feel left out while everyone else is playing the game to win even though you know you’re good enough. To be so far back in the standings and finally capitalize in a must-win situation is a highlight of my career. We hope we’re peaking at the right time – especially since the first round hosts the 750 (horsepower) package, which seems to be some of our best tracks this year.”

How crazy are the restarts at Michigan, and are they the best times to take advantage of someone?
“I feel like restarts are definitely the time to gain or lose track position, so you have to be on offense and defense at the same time. Michigan is very wide and you want to be aggressive and go take spots away, but you can easily give up four or five spots that are really hard to get back once we get single file.”

Some tracks are very line-sensitive on restarts. Is Michigan one of them?
“Yes, Michigan is very line-sensitive on restarts. The outside lane is usually the dominant lane. The inside lane – the cars on the inside usually lose sideforce – they lose the air on the side of their car – and they are very loose down there in turns one and two on the restart. The outside lane usually has the momentum and is the preferred lane going through (turns) one and two on the restarts.”

Do you feel confident heading to Michigan?
“Michigan is always a weird place for me because, in my mind, I feel like I run well there. I won a Truck race there years ago and, from that point forward, I just always loved going to Michigan. My wife’s family is from Michigan, so I go to Michigan with such a great attitude. I felt like in our first race there last year we had a lot of speed. I felt we had a top-five car there at Michigan and didn’t execute and things didn’t go our way with the restarts and I didn’t get the result. I’m excited about going back. Going to Michigan, there’s always a lot of pride for the manufacturers. I’d love to go there and keep the trophy in Ford’s backyard.”