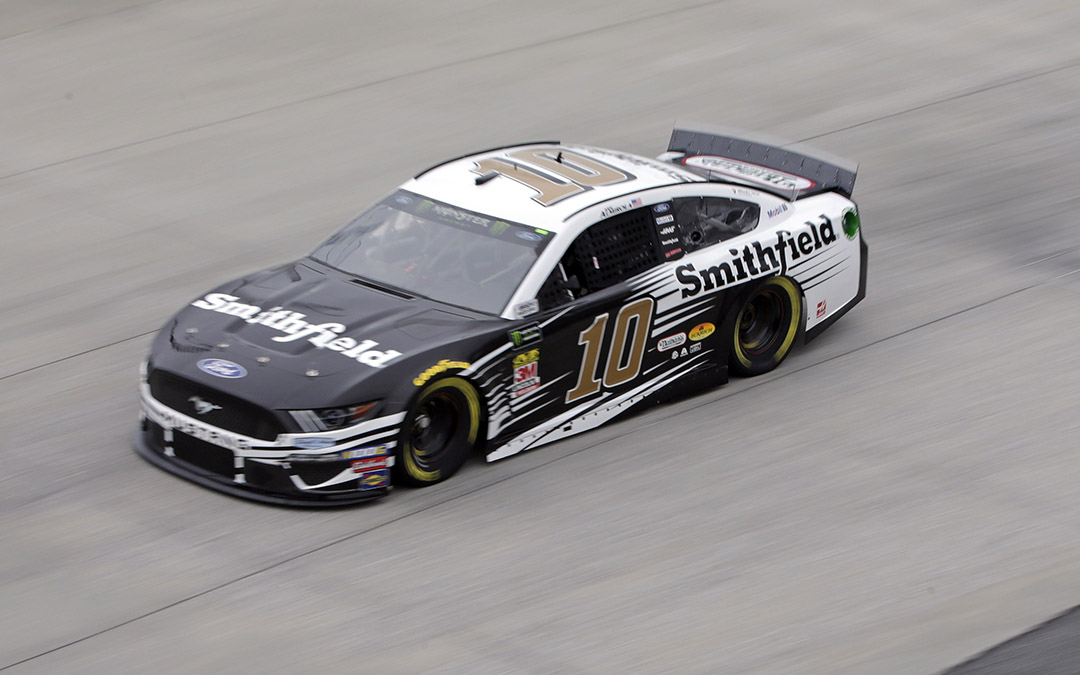 His strong start began with six consecutive top-10s after being wrecked in the closing laps of the season-opening Daytona 500. Through 14 races, he has amassed eight top-10s, one top-five, one pole and has led 99 laps. He is 12thin the championship standings with 393 points. Through the first 14 races of 2018, Almirola only had six top-10s, no top-fives, no poles and only led a single lap, but was 11th in the standings. Aside from Almirola’s misfortune at this year’s Daytona 500, his only other episode of back luck came when he was wrecked on lap two at Bristol (Tenn.) Motor Speedway in April after qualifying sixth –13 positions better than last year’s spring Bristol race.

Even more impressive is the number of races Almirola has led for the first time in his career. After earning his first career pole award at Atlanta Motor Speedway in February, he went on to lead his first 36 laps at the 1.5-mile oval. Just two weeks later, Almirola led the first 26 laps of his career at ISM Raceway near Phoenix. The following week at Auto Club Speedway in Fontana, California, he led the field for seven laps and, two weeks later at Texas Motor Speedway in Fort Worth, Almirola led laps for the first time there – three in all – after battling a stomach bug just hours before the green flag waved.

“It’s great to see how far we’ve come over the years and have continued to progress,” Almirola said. “I’m so grateful to have incredible partners like Smithfield, Ford Performance and a No. 10 Ford team who are always hungry for more. We started off so strong, had some bad luck, and we’re still more competitive than we were last year, but we’re competitors and we’ll always want more. Michigan is a track that we have progressed at, as well, so I’m excited to get back there to compete for a win in Ford’s back yard.”

While Almirola comes off last weekend’s Pocono top-10, he’s also coming off a top-10 at Michigan in his last visit there last August, when he started 11th and finished seventh. SHR teammate Kevin Harvick won that race after teammate Clint Bowyer won the rain-shortened Michigan race in June – on the front end of a 1-2-3 finish by SHR. Not surprisingly, SHR and Ford Performance have high hopes for this weekend’s Fire Keepers Casino 400.

In Almirola’s 13 starts at the 2-mile oval, he has earned one top-10 and led three laps. His last three finishes at Michigan have been the best of his career there – 12th in August 2017, 11th in June 2018, and last August’s seventh-place run.

Almirola has two starts in the NASCAR Gander Outdoors Truck Series at Michigan, winning in June 2010 after leading seven laps for his second win in the series that season. Additionally, the Tampa native made three Michigan starts in the NASCAR Xfinity Series with a best finish of eighth in June 2015 while piloting the No. 98 DenBeste Water Solutions Ford.

Michigan marks the 14th points-paying event during which the Smithfield livery has adorned Almirola’s No. 10 Ford Mustang in 2019. Smithfield, a brand of Smithfield Foods, which is based approximately five hours northeast of SHR headquarters in Smithfield, Virginia, is in its eighth season with Almirola and its second with SHR. Founded in 1936, Smithfield is a leading provider of high-quality pork products, with a vast product portfolio including smoked meats, hams, bacon, sausage, ribs, and a wide variety of fresh pork cuts.

From his 12th-place position in the standings, Almirola sits 51 points ahead of the cutoff line for the Cup Series playoffs with 12 regular-season races to go.

How crazy are the restarts at Michigan, and are they the best times to take advantage of someone?

“We’re seeing restarts get crazier and crazier at tracks that we go to. There’s no one track that they’re crazier at than the other anymore because that is the most opportune time to pass cars, besides on pit road. Pit road is the easiest place to pass but, once you line up for the restart, there’s opportunity to gain three, four, five spots in a lap, and there’s no other opportunity to do something like that throughout the run. I feel like restarts are definitely the time to gain or lose track position, so you have to be on offense and defense at the same time. Michigan is very wide and you want to be aggressive and go take spots away, but you can easily give up four or five spots that are really hard to get back once we get single file.”

“Yes, Michigan is a very line-sensitive on restarts. The outside lane is usually the dominant lane. The inside lane – the cars on the inside usually lose sideforce, they lose the air on the side of their car and they are very loose down there in turns one and two on the restart. The outside lane usually has the momentum and is the preferred lane going through (turns) one and two on the restarts.”