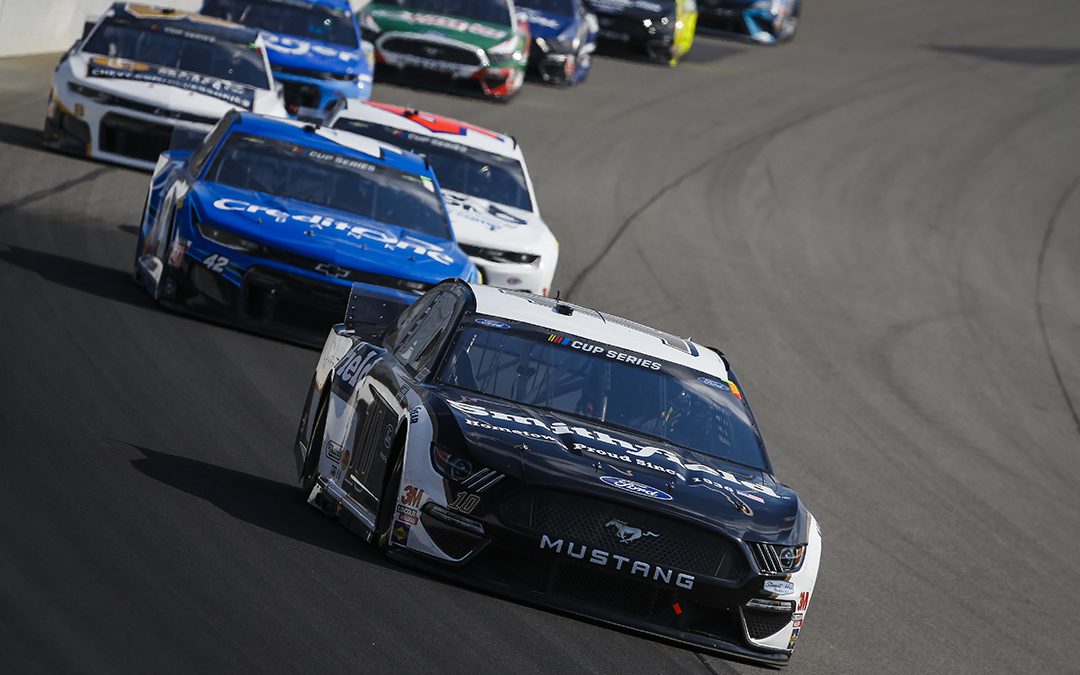 Stage 1 Recap (Laps 1-40):
● Aric Almirola started fifth and finished 19th.
● Almirola was forced to drop to the rear of the field due to using a backup car.
● The No. 10 Smithfield driver said his handling improved from Saturday’s race at Michigan.
● He pitted at the end of the stage for four tires, fuel and adjustments to gain multiple positions.

Stage 2 Recap (Laps 41-85):
● Almirola started 16th and finished eighth to earn three bonus points.
● Almirola raced to eighth by lap 79.
● He pitted at the end of the stage for four tires, fuel and air pressure adjustments.

Final Stage Recap (Laps 86-156):
● Almirola started 11th and finished sixth.
● Almirola was scored fifth after an accident on lap 96.
● The No. 10 Smithfield Ford driver did not pit under caution on lap 107.
● He led the field to green and held the lead for five laps.
● Almirola pitted on lap 138 for four tires and fuel to restart 20th with fresher tires than the rest of the field.
● Almirola gained nine spots on the restart and raced his way just outside the top-five before the checkered flag waved.

Aric Almirola, driver of the No. 10 Smithfield Ford Mustang for Stewart-Haas Racing:
“Today is how we’re supposed to run. We drove from 32nd to the top-10 and had a great Smithfield Hometown Heroes Ford Mustang. We were able to rally there at the end from 22nd to sixth in 12 laps. It felt like we were going to get to third and just ran out of laps. Really proud of Mike Bugarewicz and everyone on our team. Yesterday was a tough day and a character building day. The team worked their guts out last night and we had a great day with the result of it. We’re back on track with our top-five and top-10 capability. Congrats to Kevin Harvick on back-to-back wins here and keeping the heritage trophy in Ford’s backyard.”

Notes:
● Almirola earned his 13th top-10 of the season and his second top-10 in 17 career NASCAR Cup Series starts at Michigan.

● Almirola has eclipsed his top-10 total from last year (12) with 14 races still remaining this season.

● Almirola has finished among the top-10 in 10 of the last 11 NASCAR Cup Series races. His average finish during this span is 6.5.

● Almirola led twice for nine laps to increase his laps-led total at Michigan to 13.

● Kevin Harvick’s margin of victory over second-place Denny Hamlin was .093 of a second.

● There were five caution periods for a total of 24 laps.

● Twenty-eight of the 39 drivers in the race finished on the lead lap.

● Harvick remains the championship leader after Michigan with a 137-point advantage over second-place Brad Keselowski.

Next Up:
The next event on the NASCAR Cup Series schedule is the Go Bowling 235 on Sunday, Aug. 16 on the road course at Daytona (Fla.) International Speedway. The race begins at 3 p.m. EDT with coverage on NBC and SiriusXM NASCAR Radio.