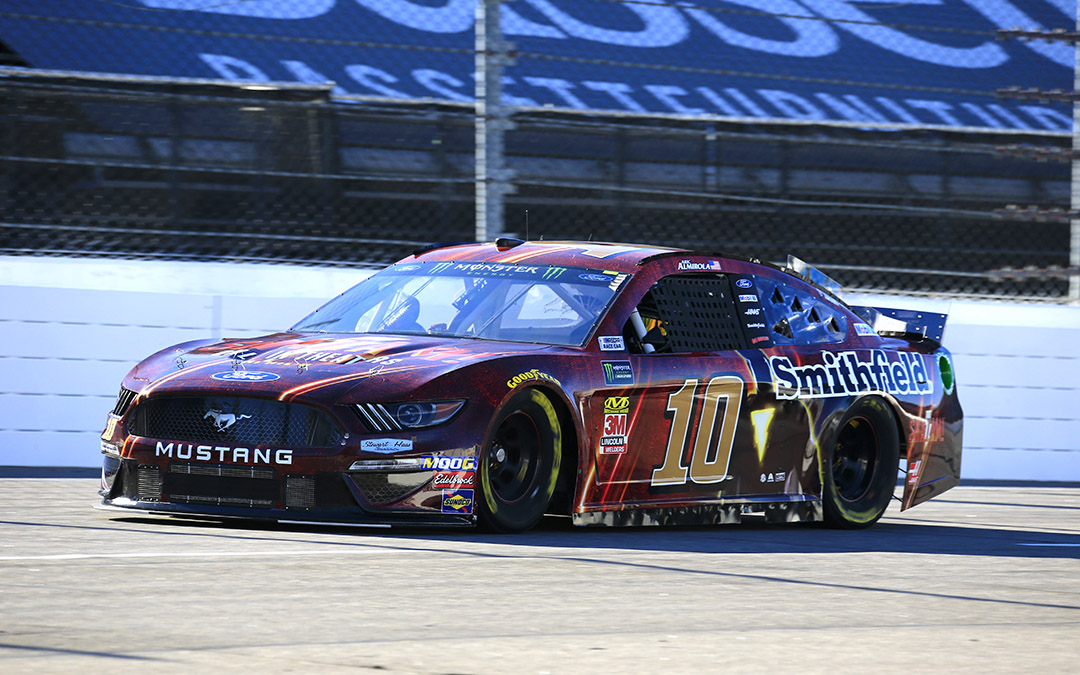 Stage 1 Recap (Laps 1-130):
● Aric Almirola started second and finished third, collecting eight bonus points.
● No. 10 Shazam/Smithfield Ford Mustang ran in fourth for the majority of the opening stage.
● Almirola pitted during a caution on lap 68 for four fresh tires, fuel and air pressure and chassis adjustments.
●He said the No. 10 Ford was loose at the beginning of the stage, but the car drove better as the laps wore on.
● After he pitted he noted that the tires were spinning on the exit of the turns, but the car was turning better.
● Almirola passed the No. 11 car on lap 112 to finish third in Stage 1.
● He pitted for four more tires, fuel and air pressure and chassis adjustments at the conclusion of the stage.

Stage 2 Recap (Laps 131-260):
● Started fourth and finished sixth, collecting five bonus points.
● Almirola piloted the Shazam/Smithfield Ford Mustang inside the top-five until lap 251.
● At the end of the stage, he radioed crew chief Johnny Klausmeier that he needed more drive off of the turns and better turn in the middle.
● Almirola pitted for four tires, fuel and air pressure adjustments at the end of Stage 2.

Stage 3 Recap (Laps 261-500):
● Started fifth and finished ninth.
● On the opening laps, Almirola and the No. 18 car made contact, forcing the No. 10 Shazam/Smithfield Ford outside of the top-10.
● Almirola pitted on lap 312 under caution for four tires, fuel and air pressure adjustments to counter tight-handling conditions. He landed seventh off pit road.
● During the next caution period on lap 371, Almirola pitted for four tires, fuel and adjustments, but an issue with the right-rear tire during the pit stop demoted the No. 10 Ford to 13th place.
● Almirola raced back to eighth place and battled for seventh until the lap-445 caution was called.
● He pitted for four tires and fuel and said the balance of his Ford Mustang was improving, but an issue on pit road resulted in Almirola restarting in 12th place.
● He piloted the No. 10 Shazam/Smithfield Ford back to ninth place before the checkered flag waved.

Notes:
● Almirola earned his fifth top-10 of the season and his fourth top-10 in 21 career Monster Energy NASCAR Cup Series starts at Martinsville.
● Almirola has finished among the top-10 in every race this year with the exception of the season-opening Daytona 500.
● Almirola finished third in Stage 1 to earn eight bonus points, and sixth in Stage 2 to earn an additional five bonus points.
● Brad Keselowski won the Martinsville 500 to score his 29th career Monster Energy NASCAR Cup Series victory, his second of the season and his second at Martinsville. His margin of victory over second-place Chase Elliott was .594 of a second.
● There were seven caution periods for a total of 56 laps.
● Twenty of the 36 drivers in the Martinsville 500 finished on the lead lap.
● Kyle Busch leaves Martinsville as the championship leader with a 21-point advantage over second-place Denny Hamlin.

Aric Almirola, driver of the No. 10 Shazam/Smithfield Ford Mustang for Stewart-Haas Racing:

“We had a great weekend overall. Our Shazam/Smithfield Mustang was fast today, but we got hit by the 18 car in Stage 2 that knocked us back to 12th, and we had to fight hard to get back to where we were all day. We’ve earned five straight top-10 finishes, so I guess it’s okay to be upset with a ninth-place finish.”

The next event on the Monster Energy NASCAR Cup Series schedule is the O’Reilly Auto Parts 500 on Sunday, March 31 at Texas Motor Speedway in Fort Worth. The race starts at 3 p.m. EDT with live coverage provided by FOX.