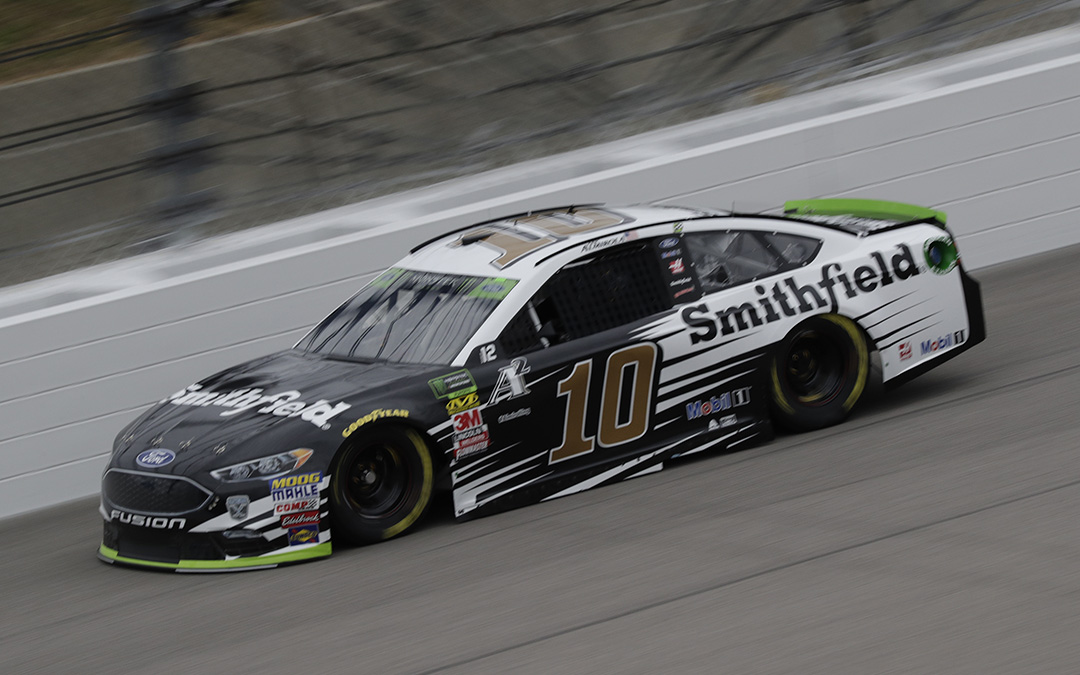 KANNAPOLIS, North Carolina (Oct. 24, 2018) – Aric Almirola and the No. 10 Smithfield Ford Fusion team for Stewart-Haas Racing (SHR) make the short trek to Martinsville (Va.) Speedway this weekend for the first race of the Round of 8 in the 2018 Monster Energy NASCAR Cup Series playoffs. Almirola, who secured his spot in the Round of 8 by winning two weeks ago at Talladega (Ala.) Superspeedway, is coming off a top-10 finish Sunday at Kansas Speedway in Kansas City.

The entire four-car SHR contingent had another solid weekend at Kansas as all four were able to advance to the Round of 8. SHR is the only organization with all of its teams still battling for the championship, which culminates next month with the winner-take-all season finale at Homestead-Miami Speedway. The two-time championship-winning SHR organization, which makes up 50 percent of the remaining playoff field, is the first since Joe Gibbs Racing in 2016 to have all of its entries reach victory lane, which it did this season.

Martinsville, which is located approximately two hours from SHR’s headquarters in Kannapolis, North Carolina, is the first of three races in the Round of 8. It’s vital for Almirola and the No. 10 Smithfield team to earn maximum points this weekend as he’s currently ranked eighth in points with 4,006, 12 behind fourth-place Chase Elliott. A win at any of the next three races would automatically lock the Almirola into the Championship 4 that will compete for the Cup Series title at Homestead.

In this year’s spring race at the Virginia half-mile oval, Almirola qualified 10th and finished 14th after running in the top-10 late in the race before receiving a pit-road speeding penalty. Overall at the concrete track, the 34-year-old has one top-five finish and three top-10s in 19 starts. He’s led 56 laps there and has an average start of 20.1 and an average finish of 22.0.

Almirola piloted a special bacon-themed Smithfield Ford Fusion to victory lane at Talladega. The unique paint scheme coincided with Smithfield’s Bacon for Life promotion. Yes, it’s possible to win bacon for life. The sweepstakes can be entered by finding specially marked packages of Smithfield bacon in stores, then visiting Smithfield.com/BaconForLife and entering the unique code provided in the package. More than 1,000 runners-up will be awarded select bacon merchandise during the sweepstakes, which runs until Dec. 31.

Before heading to .526-mile, paperclip-shaped track this weekend, Almirola participated in a Goodyear Tire test Tuesday at Charlotte (N.C.) Motor Speedway. The test marked the first time the 2019 Cup Series Ford Mustang model has been on the track. One driver from each of the four manufacturers participated in the one-day test. “It’s comfortable to drive and it looks awesome – just like you would buy it off of the showroom floor,” Almirola said. “It’s cool to see all of the effort the Ford teams and Ford Performance have put into making the Mustang come to reality. It’s been nice to have the first official laps in the Mustang for us to collect some data and get ready for 2019.”

Kansas is the 30th points-paying event during which the Smithfield livery has adorned Almirola’s No. 10 Ford Fusion. Smithfield, a brand of Smithfield Foods, which is based approximately five hours northeast of SHR headquarters in Smithfield, Virginia, is in its seventh season with Almirola and its first with SHR. Founded in 1936, Smithfield is a leading provider of high-quality pork products, with a vast product portfolio including smoked meats, hams, bacon, sausage, ribs, and a wide variety of fresh pork cuts.

Through 32 races this season, Almirola has earned one win with an average start of 16.3 and an average finish of 13.3 with three top-five finishes and 14 top-10s. He’s also led 181 laps this season, already a career best with four races remaining.

Of the next three races, is there one that stands out to you?
“I think Martinsville will be a good place for us. We ran really well there in the spring and Clint (Bowyer) won there in the spring so, obviously, Stewart-Haas Racing has a good setup for there and we have good cars. I think the amazing thing about our organization is that I don’t think we have any weaknesses. We can go pretty much anywhere and win. I think one of the coolest things about SHR and Ford is that we have fast racecars and, when you have fast cars, you can win anywhere.”

What does it feel like to have Tony Stewart put so much belief in you?
“It’s meant so much to me to have Tony and Gene (Haas) and everybody to believe in me and, honestly, the people at Ford, too. Ford believed in me and supported me throughout the process and wanted me to stay driving a Ford, if possible. Smithfield, too, they’ve been a great sponsor and have been supportive. To have all of those people believe in me and continue to believe in me through years of some success, and years of not much success at all – they still believed in me and, when given the right opportunity and right equipment, I can go and be successful. That’s why winning at Talladega was so special to me. I felt like it was validation for them believing in me, but it’s also the only way I know how to pay all of these people back. The only way to pay them back was to go perform, and to win was a really big deal.”

What is it like showing up at the racetrack with a chance to win each week?
“It’s invigorating, it really is. It brings so much energy to myself and to the race team. When you show up at the racetrack every week and you know you have a shot to win, it brings a whole other level of focus, attention to detail, everything. Because when you don’t feel like you do, you go into it thinking, ‘I hope we have a good weekend, I hope things go our way,’ but when you know you have a car that can win, there is just a fire that burns inside you and the race team. You just show up at the track and you’re ready to kick some butt.”