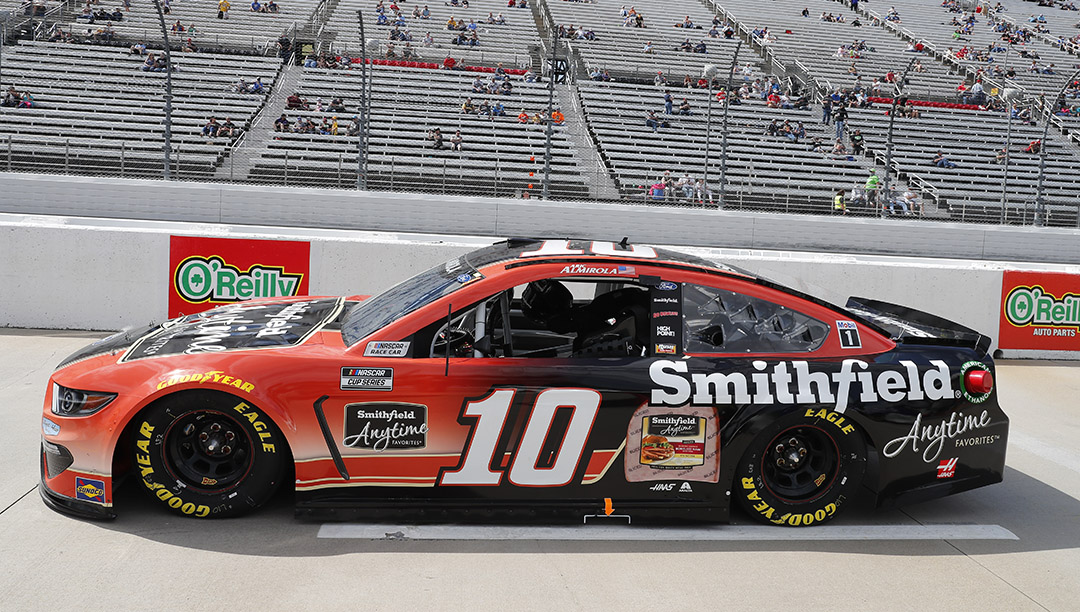 Stage 1 Recap (Laps 1-130):
● Aric Almirola started 32nd and finished 21st.
● The No. 10 Smithfield Anytime Favorites driver raced to 23rd before a caution on lap 38.
● He pitted for four fresh tires, fuel and air pressure adjustments, and gained an additional two spots on pit road before the red flag waved, ending the race day for inclement weather.
● Almirola restarted 21st when the race resumed on Sunday and fought difficult handling conditions throughout the stage.
● He aggressively raced around the top-20 before the leader attempted to put him a lap down.
● Almirola successfully stayed on the lead lap, proving he had a fast Smithfield Ford.
● The No. 10 team pitted at the end of the stage for four fresh tires, fuel and chassis and air pressure adjustments.

Stage 2 Recap (Laps 131-260):
● Almirola started 21st and finished 11th.
● He raced his way to 17th and battled teammate Kevin Harvick for the position in the middle of the stage.
● Crew chief Mike Bugarewicz radioed Almirola on lap 214 that his lap times were quicker than the leader.
● Almirola pitted from 16th under caution on lap 240 for four fresh tires, fuel and air pressure adjustments.
● Almirola raced up to 14th and then was struck in the left rear by the No. 6 car. He held on to his car and his position while the No. 6 car caused a caution behind him.
● The No. 10 gained three more spots on the restart to finish the stage just outside the top-10
● He pitted at the end of the stage for four tires, fuel and adjustments. During the pit stop, the team had to repair damage, causing a slower stop and losing multiple positions.

Final Stage Recap (Laps 261-500):
● Almirola started 19th and finished 20th.
● Almirola was contacted in the left-rear quarter panel during the restart. He pitted to fix damage and take four tires and fuel.
● The Smithfield Anytime Favorites driver stayed out during a lap-291 caution and restarted sixth.
● On older tires, Almirola fought for the top-10. He made contact with the No. 47 car before settling in at 12th place.
● Almirola was forced to the pits due to a cut tire. He came off pit road two laps down before the caution was called on lap 321. Almirola took the wave-around to go one lap down.
● The No. 10 car was contacted again on the left rear, forcing Almirola to pit.
● He restarted 29th and opted not to pit during another caution on lap 340.
● When racing resumed, the No. 6 car spun ahead, and the No. 10 was shoved into the back of another car. Significant right-front damage forced Almirola to the pits to attempt to repair the damage.
● Almirola came off pit road three laps down. He pitted again under caution to repair damage on lap 374.
● Almirola escaped a multicar accident on lap 386 and gained multiple positions. He was scored two laps down.
● He was waved around after another caution on lap 454 to go only one lap down.
● Almirola raced to the Lucky Dog position to be eligible to rejoin the lead lap, but the caution was not called before the checkered flag waved with Almirola in 20th.

Aric Almirola, driver of the No. 10 Smithfield Ford Mustang for Stewart-Haas Racing:
“I’m not sure what it’s going to take to have our luck change, but I sure hope it’s soon. We ran so aggressively and so well, and it felt like we just had a magnet on the left-rear quarter panel. We stayed in the lead lap there in the first stage, and I felt like we had a solid car to work with. Then we got jammed up and I got pushed into another car that tore up the front end. We couldn’t catch a break all day. After all of that we still had a top-10 Smithfield Anytime Favorites Ford. We were in the Lucky Dog position there at the end and couldn’t get a caution to get us back in contention. We’re keeping our heads up and waiting for the bad luck to end.”

Next Up:
The next event on the NASCAR Cup Series schedule is the Richmond 400 on Sunday, April 18, at Richmond (Va.) Raceway. The race begins at 3 p.m. EDT with live coverage provided by FOX and SiriusXM NASCAR Radio.