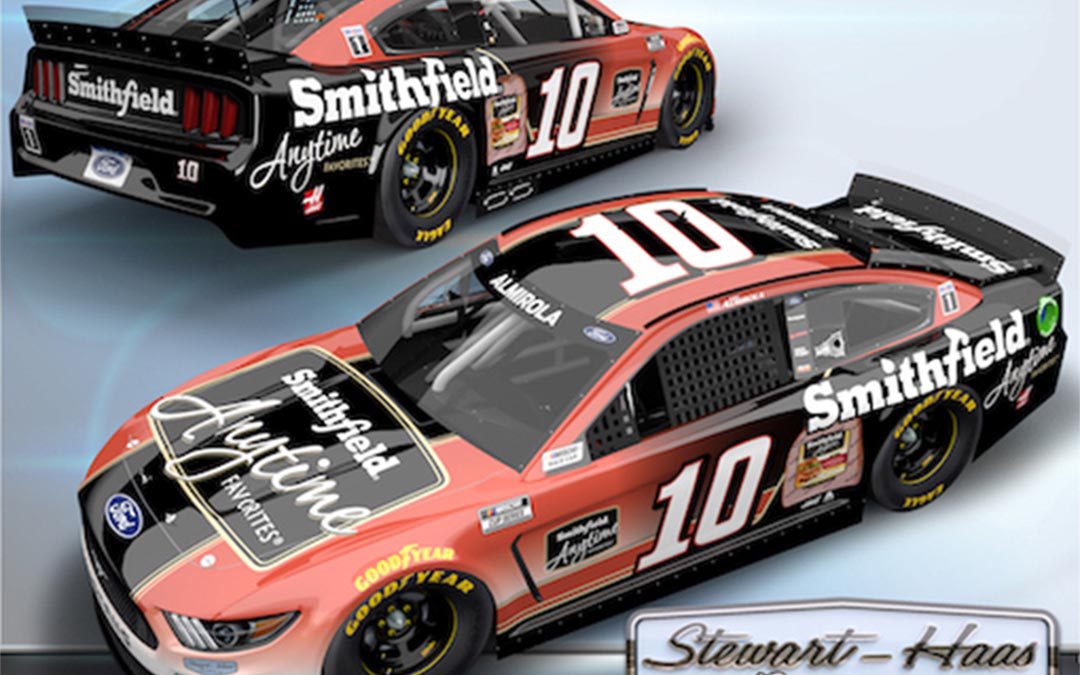 Notes of Interest
● History at Martinsville: In 25 starts, Almirola has earned five top-10 finishes, one top-five, and has led 75 laps. He finished seventh in his most recent start Nov. 1, 2020.

● Crew chief Mike Bugarewicz visited victory lane at Martinsville in 2018 with former Stewart-Haas Racing driver and current FOX analyst Clint Bowyer after leading 215 laps. “Buga” is in his sixth fulltime season at SHR and his second with Almirola.

● Looking at the next six races on the NASCAR Cup Series schedule, Almirola has finished no worse than eighth at least once at each respective track in 2020. He earned a seventh-place finish at Martinsville, eighth at Richmond (Va.) Raceway, third at Talladega (Ala.) Superspeedway, sixth at Kansas Speedway in Kansas City, seventh at Darlington (S.C.) Raceway and seventh at Dover (Del.) International Speedway.

● The start to Almirola’s 2021 season has been mired by accidents and unfortunate situations, but the No. 10 team has performed much better than the results show. Almirola kicked off the season with a win at the Duel at Daytona. He proved to have a fast Smithfield Ford in the Daytona 500 before he was involved in an accident not of his doing while running at the front of the field. Almirola raced inside the top-10 the following weekend on the Daytona road course, showing his and the team’s improved speed at road courses, and ran inside the top-10 at Homestead-Miami Speedway before he was involved in an accident. At Las Vegas Motor Speedway, he gradually gained speed, running in the top-15 before a flat tire sent him into the wall, causing irreparable damage. At Phoenix Raceway, Almirola ran as high as sixth, but a speeding penalty demoted him to the rear of the field before he raced back to a solid 11th-place finish. Almirola cracked the top-14 at Atlanta Motor Speedway before handling issues hampered his progress, and he was not able to show his dirt racing speed at Bristol (Tenn.) Motor Speedway two weekends ago due to an accident on lap 41, when he was pinched to the bottom lane and struck a large clump of dirt and then was contacted on all sides by multiple cars to end his day.

● Almirola has shown his best performance this year at the 750-horsepower, low-downforce-package tracks, which will be in effect this weekend at Martinsville.

● Almirola’s Ford Mustang this weekend will sport a fresh new look for the first time this season with Smithfield Anytime Favorites livery adorning the No. 10 car. Smithfield Anytime Favorites, with its versatile portfolio of products, lets you enjoy ham at breakfast, lunch, and dinner any day of the year. The full line of Anytime Favorites is pre-cooked, making it a convenient meal solution. Quickly warm a Ham Steak or Smoked Chop on the stovetop or Pit Boss grill for a flavor packed, center-of-the-plate protein.

● The Smithfield Ford team sits 28th in the championship standings with 88 points, 239 behind leader Denny Hamlin.

What mindset do you have heading to Martinsville?

“The mindset is really the same as every weekend. We have a great Smithfield Ford team, a playoff-contending team, and I’ll say that every weekend whether we run well or not. We head to every race weekend knowing we can have a chance to run up front or win these races and our better days will come. I really like Martinsville. We had a good run the last time we visited Martinsville and Buga (crew chief Mike Bugarewicz) has had success there in the past. We saw what speed we had in Phoenix and, even after a speeding penalty, we overcame to have a solid day.”

Tell us about your “Beyond the 10” series on YouTube.

“The Beyond the 10 series gives fans a different perspective on a NASCAR season that they can’t find anywhere else. It shows them what all goes into a NASCAR season from start to finish each year. We have a huge following now and we’re really proud of the content we’re able to provide fans. This year, we’ve shown a lot of ups and downs of the season. Bristol dirt didn’t go the way we wanted, but we showed what all went into that weekend and how it was different from a typical race. You’ll see a lot more of that this year.”

What does it take to run well at short tracks?

“No matter what the situation is, we as racers always love going to short tracks. It’s what we grew up doing and it puts the outcome in the driver’s hands more than the superspeedway races. You can’t pass much there, so it’s extremely important that you stay mentally and physically focused throughout the entire run.”