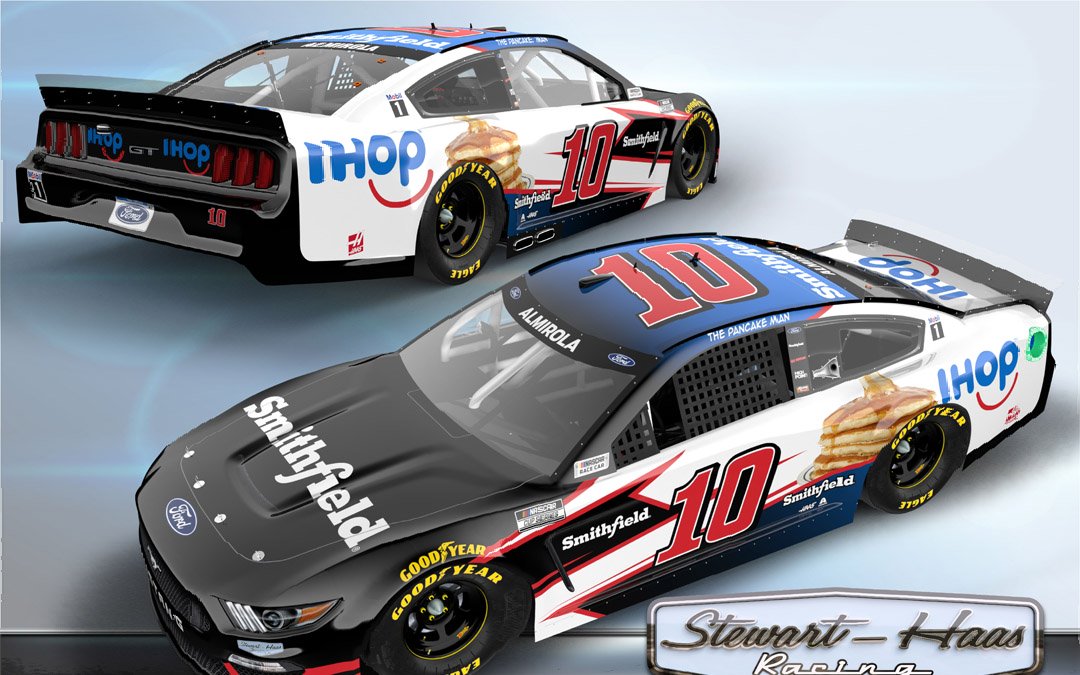 Notes of Interest
● History at Martinsville: In 26 starts, Almirola has earned one top-five finish, five top-10s, and has led 75 laps.

● IHOP will adorn the No. 10 Ford this weekend at Martinsville for the first time with a special livery that features the words “The Pancake Man” above the door in place of Almirola’s name, playing off Almirola’s nickname “Bacon Man” that has been cultivated by NASCAR fans during Smithfield’s 10 years of sponsorship. IHOP and Almirola will also fuel the No. 10 team on Sunday morning prior to the race. The special paint scheme was unveiled on SHR’s social media channels, as can be seen here. Since 1958, IHOP has been the place where people connect over breakfast, enjoy study breaks, grab a bite before or after sporting events, and so much more. No matter what menu items they order, there’s one ingredient that’s always constant – a smile.

● Smithfield celebrates 10 years of partnership with Almirolathis season with a special campaign called Taste Victory.As one of the most active partners in NASCAR, Smithfield engages fans all year long by hosting a microsite that provides the opportunity to win when Almirola wins or finishes inside the top-10. When Almirola wins, one fan wins $10,000, and 10 fans win a gift card for each top-10 finish. The microsite also doubles as an Aric Almirola fan page and entertainment source where fans can get behind the wheel of the No. 10 Smithfield Ford with a custom racing game, and learn more about Almirola with fast facts, favorite recipes and custom content about his life on and off the track. Visit www.tastevictory.com to learn more. Thanks to Almirola’s Feb. 11 win in his Duel qualifying race for the Daytona 500 and his July 18 win at New Hampshire, two lucky fans have already won $10,000 each.

● Beyond the 10 YouTube Series:In 2021, Almirola continues to share his life beyond the No. 10 Ford with season three of his award-winning YouTube series. Fans and media can subscribe on YouTube to see Almirola’s personality on and off the track. Episodes have already featured life as a dad, a husband and an athlete, and it gives fans a unique perspective on what goes on in the life of a professional NASCAR driver. Fans can also follow Almirola’s social media channels: @Aric_Almirola on Twitter and Instagram, and @AricAlmirola on Facebook. Almirola’s latest Beyond the 10 gives a first look at the NASCAR Next Gen car.

● Point standings: Almirola is currently 15th in the driver standings with 2,147 points.

Aric Almirola, Driver of the No. 10 Smithfield/IHOP Ford Mustang for Stewart-Haas Racing

What does it take to run well at short tracks?
“No matter what the situation is, we as racers always love going to short tracks. It’s what we grew up doing and it puts the outcome in the driver’s hands more than the superspeedway races. You can’t pass much, so it’s extremely important that you stay mentally and physically focused throughout the entire run.”

After winning New Hampshire this year, do you head to Martinsville and Phoenix with some extra confidence?
“Yeah, these short tracks have been strong for us all year. Martinsville is so tricky, but we’ve brought some really good speed there in the past. I’m excited we get to cap off the season with two 750-horsepower tracks.”