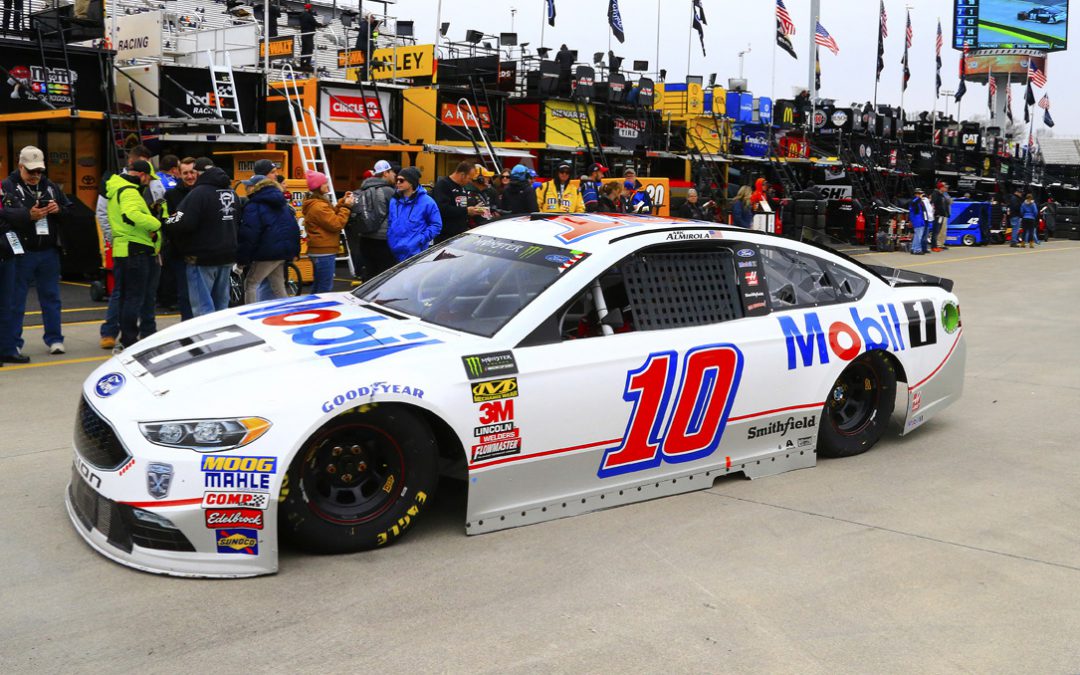 Stage 1 Recap (Laps 1-130):
● Aric Almirola started Stage 1 in the 10th position at the paperclip-shaped track and ended it in the 19th spot.
● The Mobil 1 driver was the fastest car on track by lap 30.
● Almirola’s car made contact with the No. 4 of Kevin Harvick on pit road following the lap-52 stop, causing slight damage to the right front of the No. 10.
● Johnny Klausmeier, the Mobil 1 crew chief, called Almirola back down pit road following the contact to repair the right front.
● Almirola was able to race back into the top-20 by lap 100.
● The Tampa, Florida, native requested “more drive off” as the first stage came to a close, though he was running top-10 lap times.

Stage 2 Recap (Laps 131-260):
● The 33-year-old Almirola began Stage 2 from the 19th spot and ended the stage 13th.
● Before the start of Stage 2, the Mobil 1 crew serviced Almirola’s Ford with four tires, fuel and adjustments.
● Almirola raced his Mobil 1 Ford Fusion back into the top-15 by lap 224.
● On lap 255 Almirola raced around the reigning NASCAR champion, Martin Truex Jr., to take over the 13th spot.

Final Stage Recap (Laps 261-500):
● Almirola entered the final stage in the 14th position and completed it in 14th.
● The Mobil 1 team battled a loose-handling condition through most of the stage.
● Almirola persevered and raced back into the top-10 by lap 329 to put all four Stewart-Haas Racing (SHR) cars into the top-10 once again.
● The Mobil 1 driver had raced into ninth prior to the lap-384 caution, where he opted for a full-service stop with chassis adjustments.
● Unfortunately, Almirola was penalized for speeding in Zones 5 and 6 on pit road during the lap-384 caution and had to restart in 14th.
● Almirola once again worked his way into the top-15 and ultimately finished 14th – his sixth top-15 finish in six races.

Aric Almirola, driver of the No. 10 Mobil 1 Ford Fusion for Stewart-Haas Racing:
“I worked all day to get my track position back after the first mistake, and then I made another. But our Mobil 1 Ford Fusion was fast, and while we needed to roll the corner a bit better all day, we still had a solid run. All of our finishes at Stewart-Haas have been solid this year, really showing that Mobil 1 oil technology performs on the track and Mobil 1 Annual Protection can do the same for our fans at home.”

Next Up:
The next event on the Monster Energy NASCAR Cup Series schedule is the O’Reilly Auto Parts 500 on April 8 at Texas Motor Speedway in Fort Worth. The race starts at 2 p.m. EDT with live coverage provided by FS1.