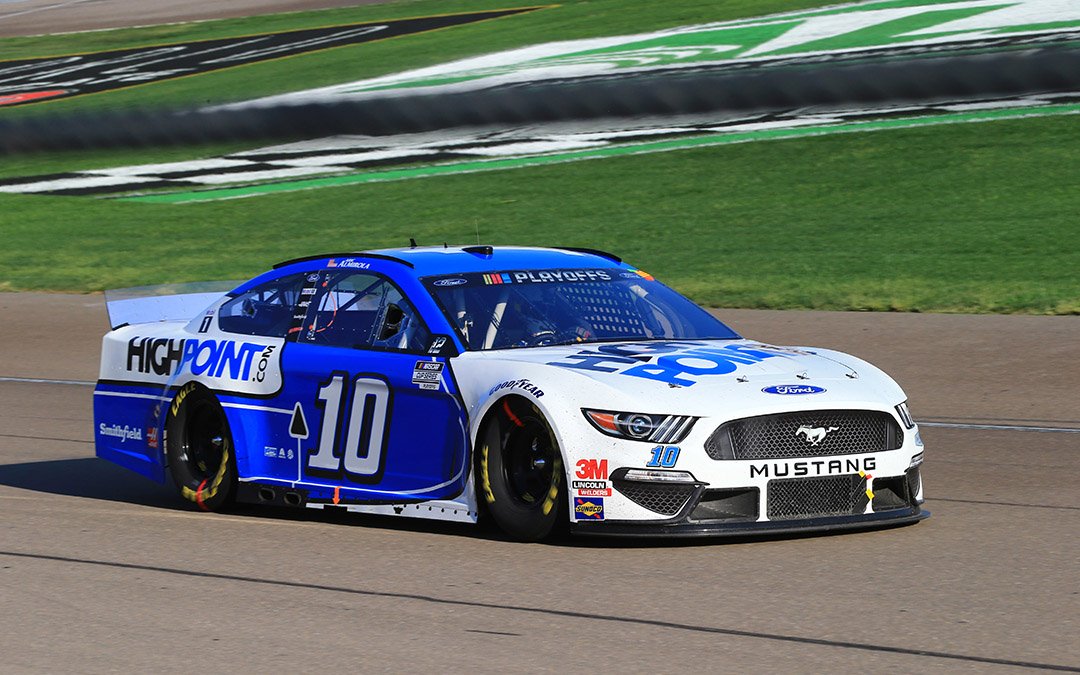 Stage 1 Recap (Laps 1-80):
● Aric Almirola started fourth and finished 13th.
● The No. 10 HighPoint.com Ford driver said his car was tight and needed more turn at the start of the race.
● He pitted for four tires, fuel, and air pressure and chassis adjustments at the lap-25 competition caution.
● Almirola came off pit road 19th and raced back to 13th before the stage ended.
● He pitted the No. 10 Ford at the end of the stage for four fresh tires, fuel and more adjustments.

Stage 2 Recap (Laps 81-160):
● Almirola started 17th and finished 12th.
● Almirola pitted the No. 10 Ford Mustang under green on lap 119.
● He was scored just outside the top-10 once pit stops cycled through.
● Almirola pitted at the end of the stage for four fresh tires, fuel, and more air pressure and chassis adjustments.

Final Stage Recap (Laps 161-268):
● Almirola started 15th and finished 17th.
● A caution was thrown for debris on lap 192. Almirola pitted for four fresh tires, fuel and reversed previous adjustments to help the balance of the No. 10 Ford.
● Almirola restarted 13th and pitted under green on lap 231 for four tires and fuel from 14th.
● Another debris caution was called on lap 235. Almirola took the wave around to restart 21st.
● The caution was called on lap 261.
● Almirola did not pit and restarted 19th for the final two-lap shootout.

Notes:
● Kurt Busch won the South Point 400 to score his 32nd career NASCAR Cup Series victory, his first of the season and his first at Las Vegas. His margin of victory over second-place Matt DiBenedetto was .148 of a second.
● There were seven caution periods for a total of 36 laps.
● Twenty-five of the 39 drivers in the race finished on the lead lap.
● Kevin Harvick remains the championship leader after Las Vegas with a three-point advantage over second-place Denny Hamlin.

Playoff Standings (with two races to go before Round of 8):

Aric Almirola, driver of the No. 10 HighPoint.com Ford Mustang for Stewart-Haas Racing:

“It wasn’t the day our HighPoint.com Ford team wanted, but we’re headed to one of my favorite tracks next. We raced right back around the top-10 and that caution put us back in 21st. We know what we have to do at Talladega. We won there in 2018 to advance to the Round of 8 and we can do it again.”

The next event on the NASCAR Cup Series schedule is the YellaWood 500 on Sunday, Oct. 4 at Talladega (Ala.) Superspeedway. It is the fifth race of the 10-race playoffs and the second race in the Round of 12. It starts at 2 p.m. EDT with live coverage provided by NBC and SiriusXM NASCAR Radio.