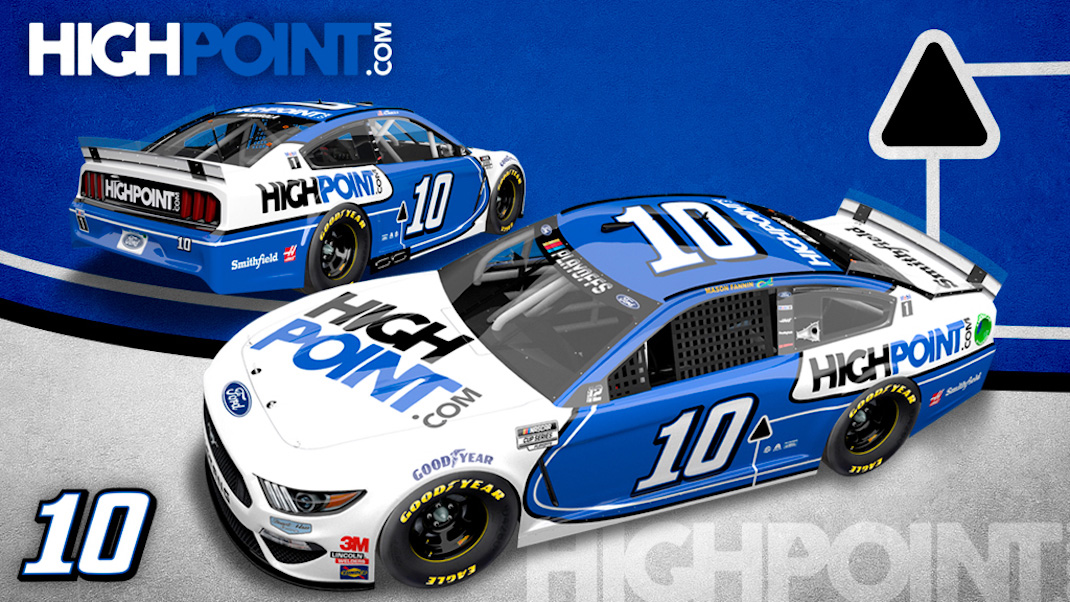 Racing Toward a Career ‘HighPoint’

KANNAPOLIS, North Carolina (Sept. 23, 2020) – Aric Almirola, driver of the No. 10 HighPoint.com Ford Mustang for Stewart-Haas Racing (SHR) in the NASCAR Cup Series, continued his career-best season last weekend when he secured his sixth top-five finish of 2020 at Bristol (Tenn.) Motor Speedway and advanced in the NASCAR Playoffs to the Round of 12 for the second time in his career.

His six top-five finishes surpass his previous best of four in a season in 2018. In addition, his 288 laps led is a career-high for a season, and his 17 top-10 finishes tied his season-best. While a win in 2020 still has eluded the No. 10 Ford team, the goal for Almirola is to race for a championship – the ultimate high point of any Cup Series driver’s career.

“This year has been like no other,” Almirola said. “The chemistry of this team is unmatched and the results are showing it. To have the best year of my career with a brand new crew chief says a lot. The first time we visited Las Vegas (site of Sunday’s South Point 400) we were still working through our communication. It was the second race of the year with a new crew chief and driver combination and we’re coming back 28 races later with a solid championship-caliber team.”

Almirola is not only optimistic due to the season stats he’s racked up, but applauds NASCAR for giving the drivers and fans a playoff schedule that crowns a champion utilizing all track configurations.

“You can’t just be good at your short-track program or your 1.5-mile program or superspeedway program,” he said. “It all has to be good. I think that is really, when you crown a champion, what you want to identify. You want to crown somebody who has been successful at every different type of racetrack throughout the year. Incorporating that into the playoffs is awesome.”

Almirola has run toward the front of the field this year at every kind of track. At intermediate-style tracks like Las Vegas, Almirola has six top-10s. And when the series races next week at Talladega (Ala.) Superspeedway, it marks a return to Almirola’s first top-three of the season – a third-place drive in June where he crossed the finish line backward upon spinning while vying for the lead. That result tied the record of eight consecutive Talladega top-10s set by Dale Earnhardt Jr., between April 2001 and October 2004. If that front-running consistency can be repeated, it should set Almirola up well for the next cutoff race Oct. 11 at the Charlotte (N.C.) Motor Speedway Roval – where a solid points cushion can mitigate the adversity that seems omnipresent on the Roval’s tight and circuitous layout.

While Almirola and the team continue their journey to reach their career high point, HighPoint.com, a leading customer service and technology solutions company, will sponsor Almirola’s No. 10 car at Las Vegas with a slick blue, black and white paint scheme for the first time this year.

It’s a proper partnership, as Almirola is one of the more tech-savvy drivers in the NASCAR Cup Series. Even before COVID-19 led to remote competition meetings via Microsoft Teams and countless media availabilities by way of Zoom, Almirola managed life via his phone and laptop.

“It’s amazing how much we rely on technology to help manage our lives,” he said. “You kind of take it for granted until you step back and realize the complexity of it all. And when it comes to what we do at Stewart-Haas Racing, the mechanical parts and pieces we use out on the racetrack don’t work as well if the IT isn’t there to support our efforts. Everything we do is engineering-based and measured in thousandths. Tape measures are long gone. It’s all about IT.”

Technology has played an increased role in 2020, with no practice or qualifying in advance of races during this COVID-19 era. Almirola and the No. 10 have embraced this brave new world and thrived, with a win being the next item on their to-do list. Las Vegas loves winners, so Almirola and the No. 10 HighPoint.com team are in the right place.

Aric Almirola: Driver of the No. 10 HighPoint.com Ford Mustang for Stewart-Haas Racing:

How much confidence has your crew chief given you this year?
“Mike (Bugarewicz) has been great to work with. He is a very passionate and intense crew chief and I enjoy that about him. He works really hard on the racecars and pays attention to all the details on the car and the simulation side of things. That is kind of where he came from. He had been an engineer for most of his career and then graduated to being a crew chief, and a good one at that. He has been a lot of fun to work with. He is certainly fiery and competitive and I appreciate that about him. He certainly expects the most out of me as the driver and he expects the most out of our team. All the guys rally around that and we do our best to make sure we give our best – and we do that anyway, but Mike expects that out of us.”

Looking at this round with Las Vegas, Talladega, and the Charlotte Roval, what are your feelings with some wild-card races in that group?

“I like it. I really enjoy the excitement that this schedule has put into our playoffs. Our playoffs are already intense and exciting and, from a fans perspective, I just think the way they have set this schedule for the playoffs is incredible. You go from the 1.5-mile track at Las Vegas, a downforce track, to Talladega, which is certainly exciting and a little bit of a wild card, and then to the Roval. It is three distinctly different racetracks. I think it is just really awesome for the fans. From the driver standpoint, I like it, too. It really sets up for that versatility and makes sure you have to be good everywhere.”