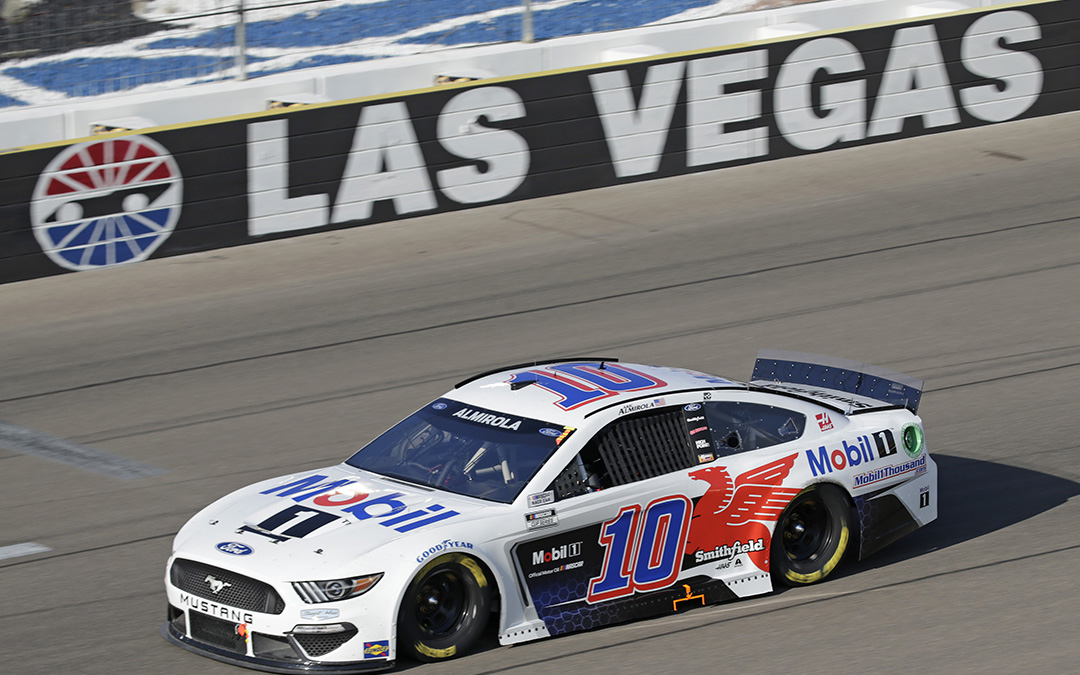 ● Aric Almirola started 17th and finished 21st.
● The Mobil 1 Ford team failed technical inspection before the start of the race, so the No. 10 had to start at the rear of the field.
● Almirola raced to 25th by the lap-25 competition caution.
● The Mobil 1 Ford driver radioed loose-handling conditions throughout the stage.
● He began to find more speed toward the end of the stage and raced to 21st.
● Almirola pitted at the end of the stage for four tires, fuel and chassis and air pressure adjustments.

● Almirola started 24th and finished 11th.
● The No. 10 team was handed a penalty during their pit stop for equipment interference and was forced to restart at the tail of the field.
● Almirola raced to 21st before a lap-92 caution. He reported a vibration and pitted for four tires under caution.
● The Mobil 1 Ford driver battled his way to the top-15 by lap 137 and raced just outside the top-10 before the stage ended.
● Almirola said the balance of his car was close but needed more grip. He pitted at the end of the stage for four fresh tires, fuel and air pressure adjustments.
● A quick pit stop from the Mobil 1 pit crew advanced Almirola to the eighth position.

● Almirola started eighth and finished 19th.
● Though Almirola started inside the top-10, he quickly fell outside of the top-20 and radioed to the team on lap 180 that the changes made “killed” the balance.
● He pitted from 20th on lap 211 for four tires and fuel.
● Almirola was scored a lap down and raced his way back to the top-20 before the checkered flag waved.

● Denny Hamlin won the South Point 400 to score his 46th career NASCAR Cup Series victory, his second of the season and his first at Las Vegas. His margin over second-place Chase Elliott was .442 of a second.
● There were four caution periods for a total of 21 laps.
● Only 12 of the 38 drivers in the South Point 400 finished on the lead lap.

Aric Almirola, driver of the No. 10 Mobil 1 Ford Mustang for Stewart-Haas Racing:

“We found really good speed and balance in our Mobil 1 Ford halfway through the race today and were good enough to race inside the top-10. Then we made one small adjustment, and something just flipped a switch and our balance was way off. We’ll move on to Talladega where we’ve had a lot of success. Excited to get there and compete for a win.”

Next Up:
The next event on the NASCAR Cup Series schedule is the YellaWood 500 on Sunday, Oct. 3, at Talladega (Ala.) Superspeedway. It is the fifth race of the 10-race playoffs and the second race in the Round of 12. It starts at 2 p.m. EDT with live coverage provided by NBC and SiriusXM NASCAR Radio.