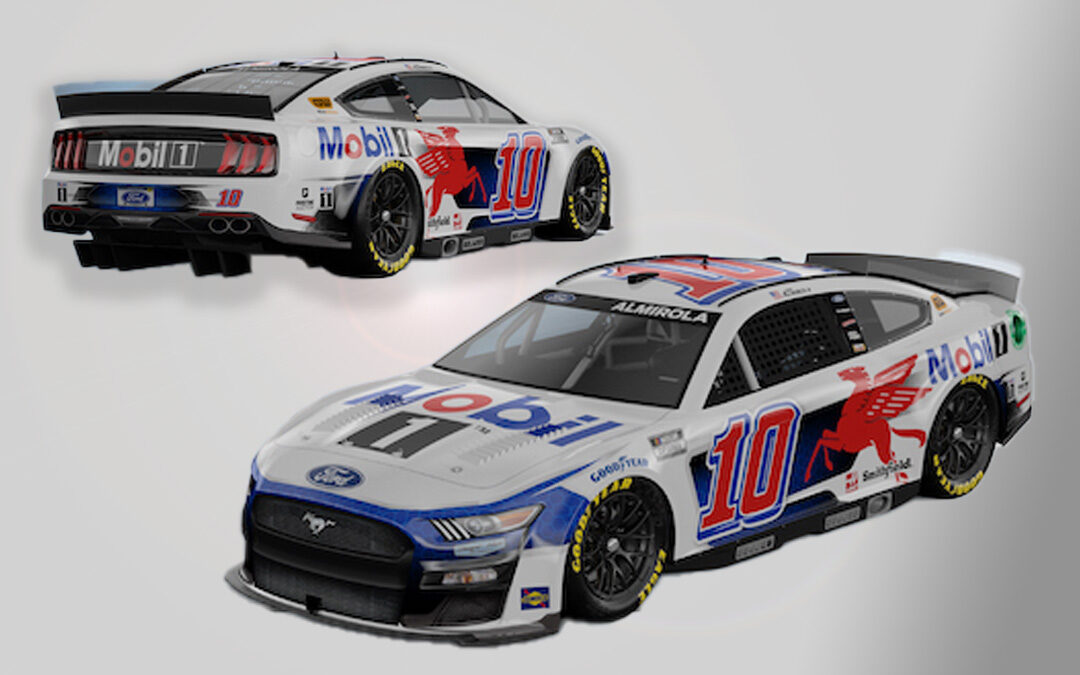 ● Best Career Start: In the first two races of the 2022 season, 19 different drivers have earned a top-10 finish. Almirola is the only driver who has finished inside the top-10 consecutively. With his fifth- and sixth-place finishes in the season-opening Daytona 500 at Daytona (Fla.) International Speedway and last Sunday at Auto Club Speedway in Fontana, California, Almirola’s average finish of 5.5 tops all drivers. This also marks the first time in his career that he has earned consecutive top-10s in the first two races of a season.

● For the love of driving:This weekend at Las Vegas Motor Speedway, Mobil 1 will adorn the No. 10 Ford as the primary sponsor. When Almirola announced his fulltime racing retirement plans, he said he was excited to race like he did when he was young – for the love of it. As a leading synthetic motor oil, Mobil 1 gives Almirola the competitive advantage so his car performs the best and so he can have the freedom to race for the love of it. Mobil 1 delivers exceptional engine performance and protection under some of the most extreme conditions. From lubricant technology to gear oil, and so much more, today’s drivers can get more out of their engine, their car, and most importantly, the road, with Mobil 1.

● Points: Almirola arrives at Las Vegas seventh in the driver standings with 66 points, 19 out of first.

● Las Vegas: In 17 starts at the desert oval, Almirola has earned three top-10s, all coming in his first three starts since joining SHR in 2018. This year’s new NextGen car, however, has proven that prior stats aren’t indicative of a driver’s performance. Last weekend was only the fourth top-10 in 14 starts at Fontana for Almirola.

● Beyond the 10 YouTube Series:In 2022, Almirola will share his life beyond the No. 10 Smithfield Ford with season three of his award-winning YouTube series. Fans and media can subscribe on YouTube to see Almirola’s personality on and off the track. Episodes have already featured life as a dad, a husband and an athlete, and it gives fans a unique perspective on what goes on in the life of a professional NASCAR driver. Fans can also follow Almirola’s social media channels: @Aric_Almirola on Twitter and Instagram, and @AricAlmirola on Facebook.

You mentioned you get to race for the pure joy of it this year. What does that mean to you?
“Yes, it has made me reminiscent of just my love for the sport, my love for racing, and I felt like I talked about it in the video that we put out on YouTube, that I fell in love with this sport sitting in the grandstands as a fan as I’m sure most every other racecar driver did, right? And I watched my grandfather race and he was wildly successful on a local level, and I loved it. I loved being at the racetrack, and then I got the opportunity to get in a go-kart and feel what that felt like. When I was sitting in the grandstands, I could just dream about it and imagine how awesome it must be to drive a racecar and go as fast as you possibly can, but then I got to experience it and I fell even more in love with racing, and just the pureness of it as a kid is so cool. Like, I’m doing it for a hobby. I’m doing it because I love it and there’s no real pressure at all. When I was go-kart racing, the only goal was to do as best as I could and to learn and to get better each and every time I went back to the racetrack. I eventually was fortunate enough to take a hobby and turn it into a profession so, yeah, I am super grateful for what racing has meant to me and where it’s taken me in my life, both professionally and personally. And, yeah, I have reminisced quite a bit about it knowing that this year will be it.”

What was your first impression of the NextGen car at a 2-mile racetrack?
“We sure had our hands full. It was a crazy day. These cars are certainly a handful and we worked on it all day and made it to where it was driving better. Then we got some damage and the guys worked on it and got it fixed. It was a solid day for us to come out and have a good start to the West Coast swing and keep our cars in one piece.”

Las Vegas hasn’t statistically been one of your stronger tracks. How do you flip the script?
“I think this new car offers that opportunity. I’ve always struggled a bit at Vegas and moving around on the racetrack. It’s a very unique track so, for me, going there with new everything gives us plenty of opportunities to perform at a high level and keep this momentum going. We also have to be patient and understand that these cars are going to behave differently and we have to take every single data point we have to make it better and be there at the end.”