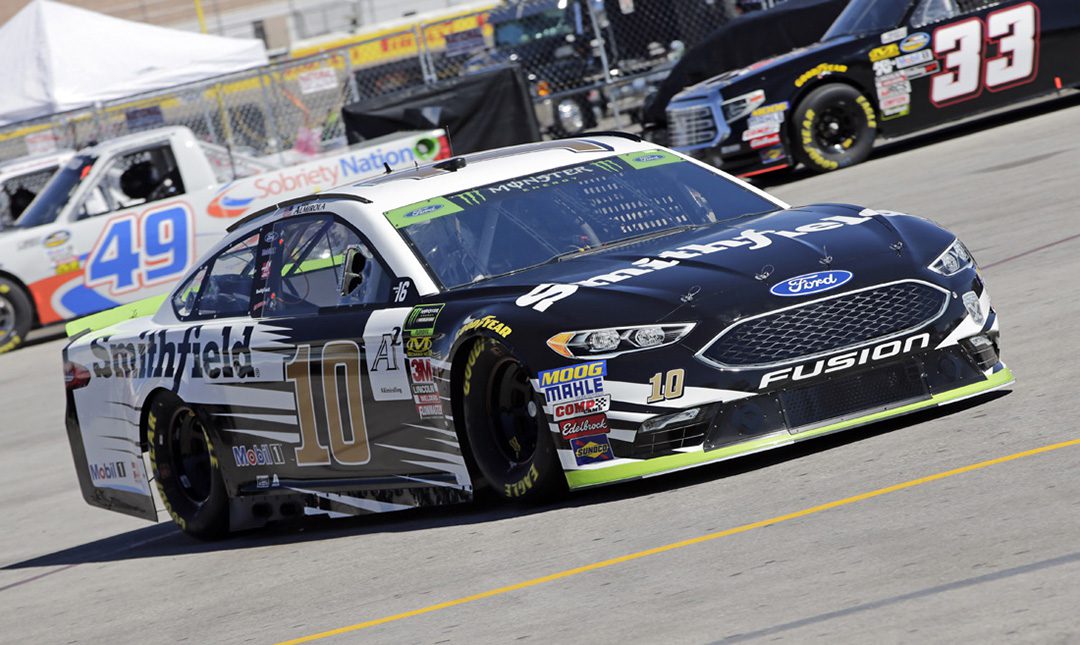 Stage 1 Recap (Laps 1-80):
● Aric Almirola started 16th and finished Stage 1 in ninth to earn two bonus points.
● Almirola’s first pit stop of the race was on lap 37 for fuel, four tires and adjustments to help his car’s loose-handling condition.
● The Tampa native moved into the ninth position in the closing laps of the stage, where he ultimately finished.
● During the stage break, Almirola came down pit road for service to his Smithfield Ford Fusion.

Stage 2 Recap (Laps 81-160):
● Almirola started Stage 2 in ninth and concluded it in 16th.
● Shortly after the green flag dropped on Stage 2, the first caution of the race was displayed while Almirola was in the 12th position.
● The second caution came out on lap 111, and Almirola visited pit road from 17th for service to tighten up his No. 10 Ford. The Smithfield crew also worked on the right-rear quarter panel after he brushed the wall.
● Almirola restarted 21st on lap 116.
● By the end of the stage, Almirola was happier with the handling of his Smithfield Ford and had worked his way up to the 16th spot.
● During the Stage 2 break Almirola visited pit road for fuel and four tires.

Final Stage Recap (Laps 161-272):
● Almirola started the final stage in the 16th spot and ended it sixth.
● The caution was displayed once again on lap 183 while the 34-year-old was in the 12th position. He visited pit road for service and restarted 14th on lap 187.
● Just a couple of laps after the restart Almirola was in 12th, the spot he held until the next caution came out on lap 213.
● Almirola came down pit road for fuel and four tires, and he restarted in the eighth spot on lap 222.
● After several late-race cautions, including a red flag on lap 267 that sent the event into overtime, Almirola was able to advance to the sixth position.

Notes:
● This was Almirola’s 11th top-10 finish of 2018 and his second top-10 in 11 career Monster Energy NASCAR Cup Series starts at Las Vegas.
● Almirola finished ninth in Stage 1 to earn two bonus points.
● Brad Keselowski won the South Point 400 to score his 27th career Cup Series victory, his third of the season and third in a row, and his third at Las Vegas. His margin of victory over second-place Kyle Larson was 1.276 seconds.
● There were 12 caution periods for a total of 59 laps.
● Eighteen of the 40 drivers in the South Point 400 finished on the lead lap.
● A 10-minute, 37-second red-flag period just before the end of the race set up a green-white-checkered finish that sent the race into overtime.

“I felt like our Ford was pretty good today. We got behind on qualifying, and that kind of set the tone. That was my fault. I was trying to get too much. I got in the fence and made another mistake today. We were able to come down on pit road and get all the damage fixed, and the car was back to being good again. I am proud of that effort. That was a really hard-fought sixth place. Man, one of these races we will have it go smooth and we will be a contender. I am really proud of that effort. That was a really hard-fought finish.”

Next Up:
The next event on the Monster Energy NASCAR Cup Series schedule is the Federated Auto Parts 400 on Saturday, Sept. 22 at Richmond (Va.) Raceway. It is the second race of the 10-race playoffs, and it starts at 7:30 p.m. EDT with live coverage provided by NBCSN beginning at 6 p.m.