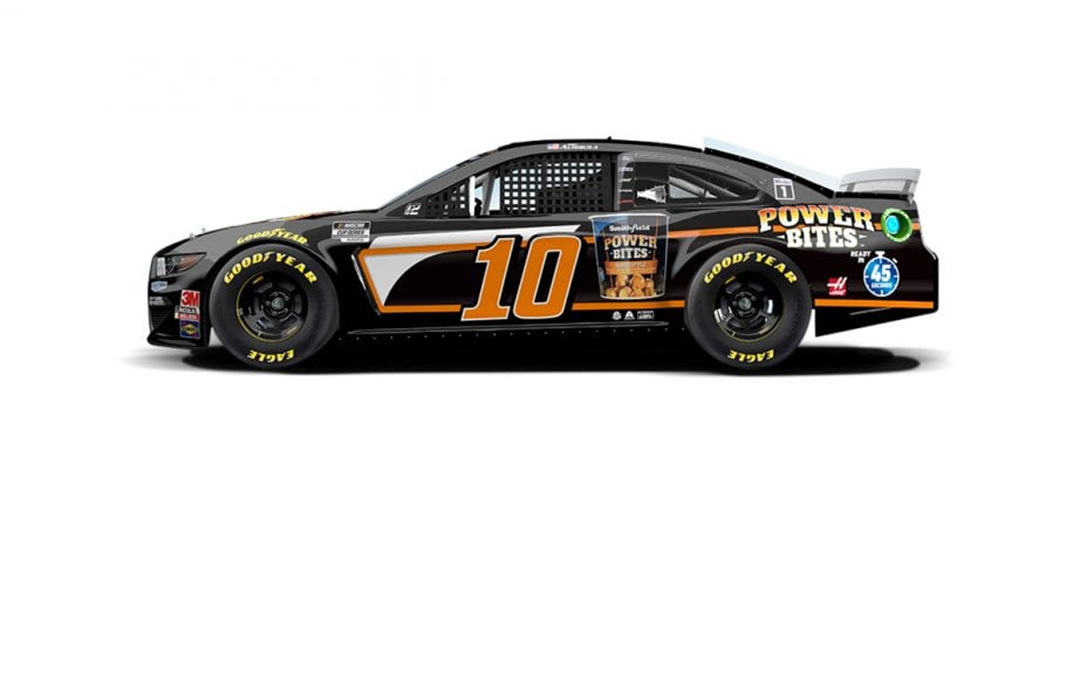 Notes of Interest
● History at Las Vegas Motor Speedway: In 15 NASCAR Cup Series starts at Las Vegas, Almirola has earned three top-10 finishes, earned consecutively in his first three starts at Stewart-Haas Racing in 2018 and 2019.
● In last year’s two visits to Las Vegas, Almirola finished 21st and 17th, respectively. To see the full race reports, click here for the Feb. 23, 2020 race and here for the Sept. 27, 2020 playoff race.
● 1.5-mile history: In Almirola’s last 10 starts at 1.5-mile tracks, he has one top-five, four top-10s, and has led 164 laps with an average finish of 13.4.
● Last weekend at Homestead-Miami Speedway, Almirola battled handling issues throughout the race and ran as high as 10th before contact on lap 201 dropped him three laps off the pace.
● Power Bites giveaway: Almirola will sport a special Power Bites paint scheme this weekend while hosting a giveaway campaign via Twitter. At the end of each stage, fans can tweet using the hashtag #PowerBitesHere to enter for a chance to win prizes like a Pit Boss Grill with Smithfield grilling items, Almirola’s signed race-worn firesuit, and a VIP race experience at Phoenix Raceway.
● Smithfield Foods celebrates 10 years of partnership with Almirola this season with a special campaign called Taste Victory.As one of the most active partners in NASCAR, Smithfield plans to engage fans all year long by hosting a microsite that provides the opportunity to win when Almirola wins or finishes inside the top-10. When Almirola wins, one fan will win $10,000, and 10 fans will win a gift card for each top-10 finish. The microsite also doubles as an Aric Almirola fan page and entertainment source where fans can get behind the wheel of the No. 10 Smithfield Ford with a custom racing game, and learn more about Almirola with fast facts, favorite recipes and custom content about his life on and off the track. Visit www.tastevictory.com to learn more. Thanks to Almirola’s Feb. 11 win in the Duel qualifying race for the Daytona 500, one lucky fan has already won $10,000.
● Beyond the 10 YouTube Series: In 2021, Almirola continues to share his life beyond the No. 10 Smithfield Ford with season three of his award-winning YouTube series. Fans and media can subscribe on YouTube to see Almirola’s personality on and off the track. Episodes have already featured life as a dad, a husband and an athlete, and it gives fans a unique perspective on what goes on in the life of a professional NASCAR driver. Fans can also follow Almirola’s social media channels: @Aric_Almirola on Twitter and Instagram, and @AricAlmirola on Facebook.
● The Smithfield Ford team sits 26th in the championship standings with 40 points, 99 behind leader Denny Hamlin.
● Crew chief Mike Bugarewicz is in his sixth fulltime season at SHR and his second with Almirola.

Last year was your first year with crew chief Mike Bugarewicz. What improvements do you see heading to Las Vegas?
“Yeah. Last year was the first year for Buga (Mike Bugarewicz) and I. Vegas last year was our first real run together as a team after the Daytona 500, so we were still learning each other. After a full season together, I have full confidence we’re going to be a solid contender this weekend. We’ve already seen the pit crew doing a great job, and the communication couldn’t be better.”

What do you need to do to get the No. 10 Smithfield team’s momentum in the right direction?
“I’m going to have to work hard to get us out of this hole with stage points and some consistent finishes. We’re so early in the season that one or two races could put us back inside the top-16 and get us back in the direction we need to be in. Our No. 10 Smithfield Ford team is good. It’s a solid team. We haven’t even been able to show what we’ve really got. We did it last year in the middle of the season and went on a hot streak. We’ll get there.”

You were involved in an accident last weekend at Homestead after running up front. Talk about that experience.
“Last weekend at Miami was tough. We fought hard all day to get the car’s balance better. I got tight and made a mistake and slid up into the No. 12 and hit the wall. It put us back and we couldn’t recover. We did get the car better than where it started and we were able to run up inside the top-10, so at least we know we have the capabilities to make changes in the race.”

How significant of a role do intermediate tracks play during the season?
“It’s crucial to really excel at the intermediate tracks. We have so many of them on the schedule and, if you can get them figured out, they can make a huge impact on your season. We’ve seen it so many times where teams get something figured out at those tracks. Those teams start running up front every weekend. If you look at the schedule, a lot of the tracks on the circuit are intermediate tracks and the most important races if you’re in the hunt for a championship.”