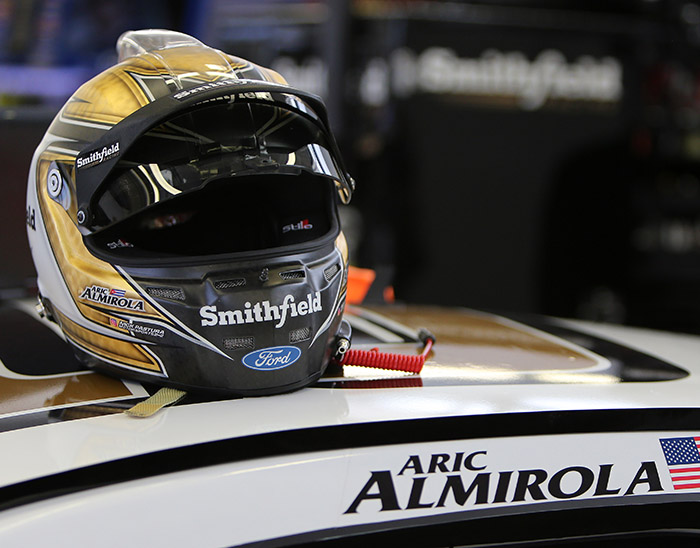 KANNAPOLIS, North Carolina (Feb. 28, 2018) – The 2018 Monster Energy NASCAR Cup Series makes the journey to Las Vegas Motor Speedway this weekend for the first of three consecutive races out West. Aric Almirola heads to Las Vegas in the No. 10 Smithfield Ford Fusion looking to build on his success Sunday at Atlanta Motor Speedway, where he earned a 13th-place finish in his second start with Stewart-Haas Racing (SHR).

The 33-year-old earned bonus points in the first two stages of the Atlanta race with finishes of fifth and eighth, respectively. The bonus points were indicative of the solid weekend SHR had at the Hampton, Georgia track. All four of the SHR Ford Fusions ended the soggy weekend with top-13 finishes. The last time SHR placed all four entries in the top-15 was at Pocono (Pa.) Raceway last July.

This weekend’s event at the 1.5-mile Las Vegas oval, which sits next to Nellis Air Force Base, is the second consecutive intermediate track on the 36-race Cup Series schedule. Almirola enters Sunday’s 267-lap event 10th in the driver standings, joining his three SHR teammates in the top-10. SHR’s Kevin Harvick leads the way in fourth place after his win at Atlanta Sunday in the first race on a mile-and-a-half track this season.

Almirola will take to the track in Nevada this weekend looking to improve on his career-best finish of 14th at the 1.5-mile oval. The native of Tampa, Florida will be making his 10th start at Las Vegas and hopes to build on the momentum from Atlanta to accomplish another solid finish.

Smithfield, a brand of Smithfield Foods, which is based approximately five hours northeast of SHR headquarters in Smithfield, Virginia, enters its seventh season with Almirola and first with SHR. Las Vegas marks the third consecutive weekend the Smithfield livery has adorned Almirola’s No. 10 Ford Fusion. Founded in 1936, Smithfield is a leading provider of high-quality pork products, with a vast product portfolio including smoked meats, hams, bacon, sausage, ribs, and a wide variety of fresh pork cuts.

Almirola and the No. 10 team led by crew chief Johnny Klausmeier participated in the Goodyear Tire Test at Las Vegas Motor Speedway’s sister track, Texas Motor Speedway, in January. Almirola’s teammate Kurt Busch tested at Las Vegas earlier this season on behalf of SHR, providing the championship-winning organization with copious notes from which to try and build a winning setup for this weekend’s 400.5-mile event.

So far this season, Almirola has completed a combined total of 531 laps and has an average finish of 12.0 in the No. 10 Smithfield Ford Fusion. Coming off two top-13 finishes – 11th at Daytona (Fla.) International Speedway and 13th at Atlanta – Almirola is looking forward to Las Vegas, where he hopes to capitalize on the successful start to the season. “We started the day out really strong at Atlanta, but I think we just got a little bit off with one adjustment and worked to correct that in the final stage,” he said. “Unfortunately, we had a lot of long, green-flag runs, which didn’t provide us a lot of pit stops to work on the car. The good news is, overall, it was a strong day for SHR. We all ran well and it ended with my teammate Kevin Harvick in victory lane. The great thing about this sport is there is always next week and we have a lot to look forward to at Las Vegas this weekend.”

Las Vegas marks Almirola’s 247th start behind the wheel of a Cup Series car. He’ll reach the 250 race-start milestone at Martinsville (Va.) Speedway at the final weekend in March.

You’ve started off the season really strong. How does it feel to be so competitive early in the
season?
“It’s great to start the season off so strong. Not only do I feel like the No. 10 team has been strong, but all of the SHR cars have been extremely competitive. At the end of both races so far, two of our cars have had the chance to win the race, and Kevin Harvick was able to go to victory lane at Atlanta. If we keep running strong and putting ourselves in the right position, we’ll eventually get a win. These guys on the Smithfield team know how to win, and I want to be able to give that opportunity to them.”

How significant of a role do intermediate tracks play during the season?
“It’s crucial to really excel at the intermediate tracks. We have so many of them on the schedule and, if you can get them figured out, they can make a huge impact on your season. We’ve seen it so many times where teams get something figured out at those tracks and go on a tear winning races. We tested at Texas before the season started, which was great. Kurt (Busch) tested at Las Vegas a few weeks ago, so that’s helpful. Of course, you hope when you go back to these tracks you’ve tested at, that some of the information you learned still applies. I’m happy with how our weekend went at Atlanta and look forward to another solid weekend at Las Vegas.”

One advantage you’ve had with your transition to Stewart-Haas Racing is the same manufacturer and sponsor. Can you talk a little bit about that?
“I am happy about continuing my relationship with Smithfield and with Ford Motor Company. I have enjoyed that relationship with them and the continuity of having the sponsor and manufacturer stay the same. That part is awesome, but I have a task at hand. At the end of the day, it doesn’t matter what manufacturer or sponsor is on the car, I want to go out and compete and win. For me, it’s about going out and doing my best each and every weekend. I would love to put Ford Motor Company back in victory lane. They put a lot of resources and effort into winning on Sunday and I couldn’t be more proud to drive for the blue oval. Smithfield has been a great supporter for many years and there is nothing more I’d like than to get them back in victory lane with Stewart-Haas Racing.”