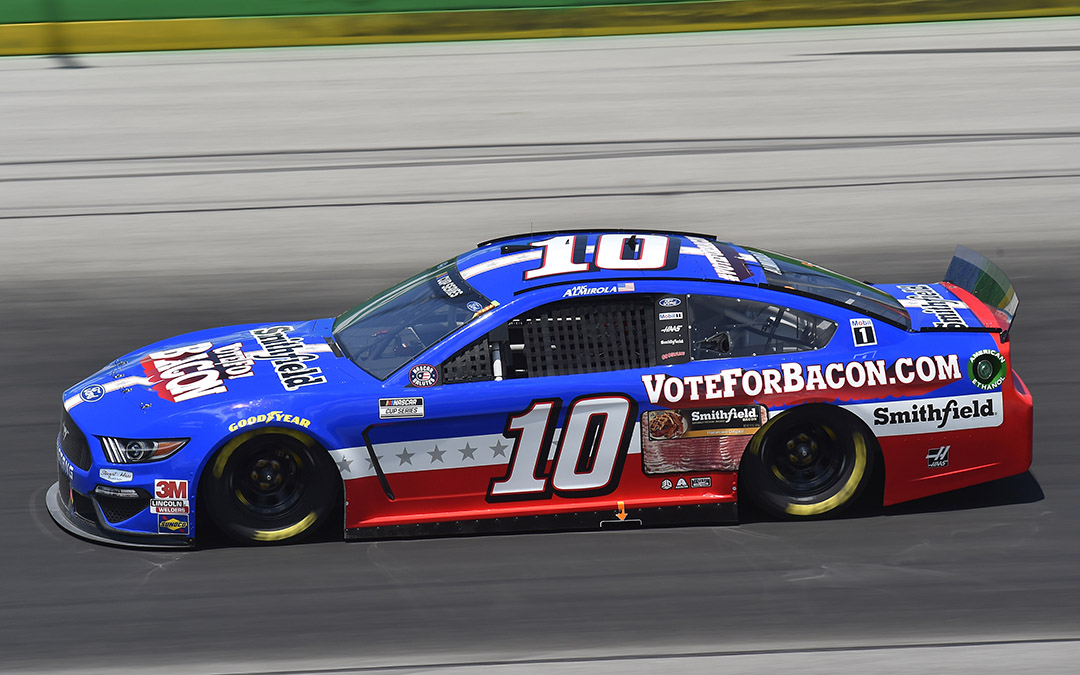 Final Stage Recap (Laps 161-267):
● Almirola started 11th and finished eighth.
● Almirola raced back inside the top-10 on lap 172
● Almirola pitted on lap 217 under green for four tires, fuel and adjustments to correct tight-handling conditions.
● When the caution was called on lap 230 the No. 10 driver did not pit.
● After the lap-250 caution, Almirola gained eight positions before another caution on lap 262.
● He restarted 12th and raced his way to eighth before the checkered flag waved.

Aric Almirola, driver of the No. 10 Smithfield Vote For Bacon Ford Mustang for Stewart-Haas Racing:
“It’s hard to be mad about another top-10, but we had such a great car and led the most laps. We had a really fast car and got caught with a caution that came at the wrong time. We had to battle our way back up there most of the day. We’re bringing incredible cars. Congrats to Cole and everyone at Stewart-Haas. Six top-10s in a row. We’ll go on to Bristol and try to race our way in for a million bucks on Wednesday.”

Notes:
● Almirola earned his ninth top-10 of the season and his second top-10 in eight career NASCAR Cup Series starts at Kentucky.
● This was Almirola’s sixth straight top-10. He finished fifth June 14 at Homestead-Miami Speedway, third June 22 at Talladega (Ala.) Superspeedway, third June 27 at Pocono (Pa.) Raceway, fifth June 28 at Pocono, and third last Sunday in the Brickyard 400 at Indianapolis Motor Speedway. Almirola’s next best streak of races in his career was a run of six consecutive top-10s in 2019 that began with the second race at Atlanta Motor Speedway and lasted through the series’ seventh race at Texas Motor Speedway in Fort Worth.
● Since joining SHR in 2018, Almirola has not finished outside the top-15 at Kentucky.
● Almirola’s eighth-place result equaled his previous best finish at Kentucky (2018).
● Almirola led once for a race-high 128 laps – his first laps led at Kentucky.
● Cole Custer’s margin of victory over second-place Martin Truex Jr., was .271 of a second.
● There were eight caution periods for a total of 42 laps.
● Twenty-six of the 38 drivers in the race finished on the lead lap.
● Kevin Harvick remains the championship leader after Kentucky with an 88-point advantage over second-place Brad Keselowski.

Next Up:
The next event on the NASCAR Cup Series schedule is the non-points NASCAR All-Star Race on Wednesday, July 15 at Bristol (Tenn.) Motor Speedway. The race starts at 8:30 p.m. EDT with live coverage provided by FS1 and SiriusXM NASCAR Radio beginning at 7 p.m. with the undercard NASCAR All-Star Open.