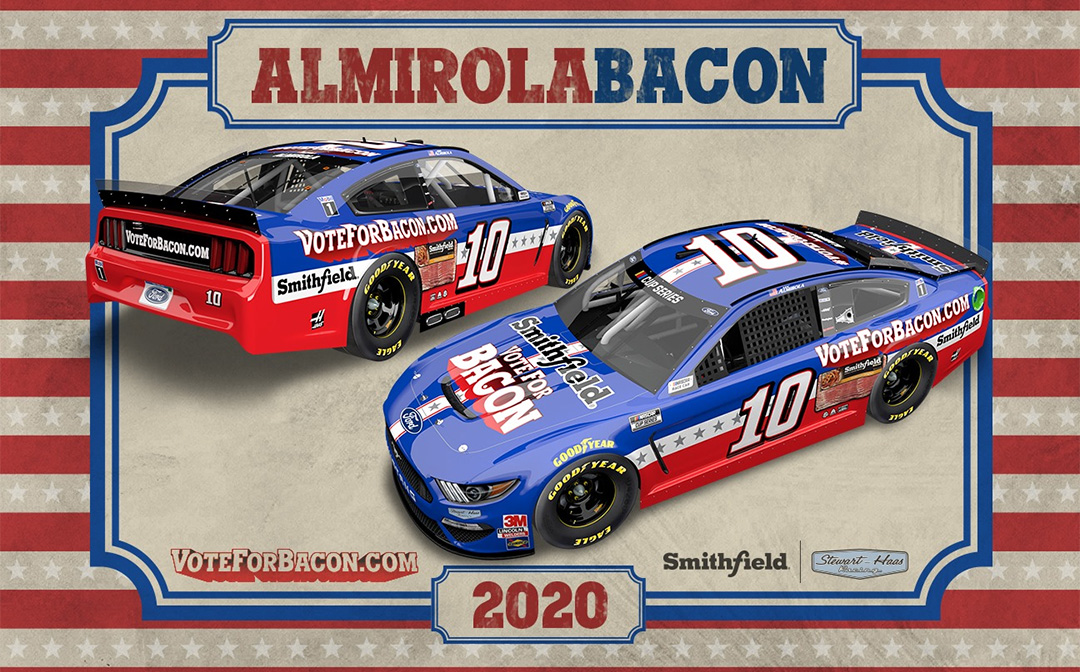 ‘A Win Is Coming’

KANNAPOLIS, North Carolina (July 7, 2020) – Aric Almirola, driver of the No. 10 Smithfield Vote for Bacon Ford Mustang for Stewart-Haas Racing (SHR), heads to Kentucky Speedway in Sparta as the NASCAR Cup Series driver with the highest average finish in the last five races at 3.8. He’s ahead of Denny Hamlin, who’s next best at 7.2, and SHR teammate Kevin Harvick, who’s third best at 8.0.

“We’re in a position now to where we can gamble a little bit and we can be a little more aggressive,” Almirola said. “We can be less conservative and not worry about points. Not that we’re going to throw caution to the wind, but we can certainly be more aggressive. A win is coming.”

Not only is Almirola looking for a win to lock himself in the NASCAR playoffs, he’s also looking to win this weekend to lock himself in to the July 15 NASCAR All-Star Race at Bristol (Tenn.) Motor Speedway, or at least win the fan vote for an opportunity to race for $1 million. To aid the team’s endeavor to make the All-Star Race, Almirola’s longtime sponsor Smithfield Foods has given the fans an opportunity to “vote for bacon” in order to secure their driver’s eligibility.

“A vote for me is a vote for bacon,” Almirola said. “I’m not one to promote myself and ask for popularity or votes, so fans can vote for bacon for a chance to earn free bacon for a year and we might make it into the All-Star Race. Smithfield is always giving back to our fan base, as we saw in Talladega when we gave away bacon for life. The real goal is to win this weekend in Kentucky and still give away some free bacon. Now that’s a win-win.”

To “vote for bacon” and help secure Almirola’s eligibility in the All-Star Race, visit www.voteforbacon.com for a chance to win Smithfield bacon for a year, a private meet-and-greet with Almirola, and free SHR merchandise.

The No. 10 Ford driver sits ninth in the playoff standings for his career-best points position after 16 races. In his first two seasons at SHR in 2018 and 2019, Almirola was 10th in the standings after 16 races. It’s the best stretch of his career. The next comparable stretch was from October 2018 through March 2019, when he posted 11 top-10 finishes in 13 races, and his two finishes outside the top-10 were 11th at Martinsville and 32nd at Daytona.

While Almirola only has one top-10 finish at Kentucky, he proved last weekend at Indianapolis, where he had never earned a top-10, that past statistics don’t have an effect on the success the team has been able to achieve this year.

Aric Almirola: Driver of the No. 10 Smithfield Vote For Bacon Ford Mustang for Stewart-Haas Racing:

Is this the first time in your career that you go to the track every race weekend expecting to compete for a win?

“Yes, absolutely. For most of my career, I would show up at racetracks and just hope to have good runs. In the summer of 2018, I felt like we had a chance to contend each weekend and several opportunities slipped away. I probably had four or five races that year that I could have won. In 2019, quite frankly we struggled. I couldn’t find any consistency running up front. I’m thoroughly impressed with this Smithfield team. Every weekend, we expect to have top-fives.”

With Kentucky being a day race in the summertime, how much will the conditions affect drivers?

“It’s going to be tough. It’s usually pretty hot already in the summertime. Kentucky, in the middle of the day, in the heat of the summer, is going to be challenging. The racetrack is going to be slower and slicker, but it will be fun. I love those conditions. The hotter the better, to be honest. A lot of my training pays off in those conditions. I don’t feel like I’m falling out of the seat. I feel fresh and ready to go, still, at the end of the race. I know some people dread racing in the middle of the day, but I don’t mind it.”

How confident are you that you’ll get a win soon, and to keep this momentum going?