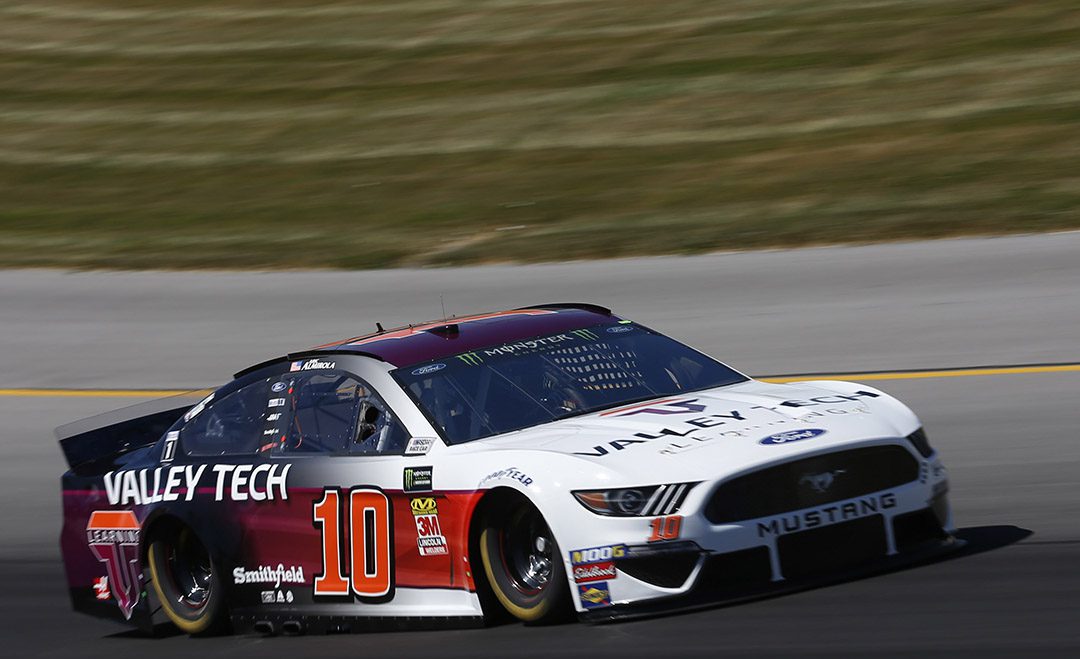 ● Aric Almirola started second, finished fifth and earned six bonus points.
● Under the first caution of the race on lap 48, Almirola reported the Valley Tech Ford was “just a little snug.” He pitted for right-side tires, fuel and adjustments on lap 49.
● Following the stop, Almirola said the adjustments made his No. 10 Mustang even tighter, but the team stayed on track during two additional cautions to finish the first stage in the fifth position.
● Crew chief Johnny Klausmeier brought the Valley Tech driver to pit road for four tires, fuel and adjustments at the stage break.

Stage 2 Recap (Laps 81-160):
● Started 17th, finished 10th and earned one bonus point.
● The Tampa, Fla., native told the Valley Tech team on lap 93 that the adjustments were helping but he was now loose in traffic.
● Almirola worked his way back into the top-10 and eventually the top-five before making a scheduled green-flag stop on lap 147 for four tires, fuel and adjustments.
● The Valley Tech driver returned to the track in the 12th position and re-entered the top-10 before the end of Stage 2.

Stage 3 Recap (Laps 161-269):
● Started third, finished 14th.
● After electing to stay on track at the stage break, Almirola lined up third for the lap-165 restart.
● During the sixth caution of the race on lap 180, Almirola radioed that his Valley Tech Ford was loose on entry. The team stayed on track to maintain the third position.
● Almirola fell back to fifth after contact with the No. 24 on the lap-185 restart.
● On lap 217, Almirola made his final scheduled pit stop under green and received four fresh Goodyear tires, fuel and adjustments for the Valley Tech Mustang.
● After green-flag stops were complete, Almirola found himself in the seventh position before a late-race caution on lap 261.
● Almirola stayed on track to maintain track position and restarted seventh on lap 267, but he was unable to find an opening in the top line and fell back outside of the top-10.
● The No. 10 Valley Tech Mustang ultimately crossed the finish line in the 14th position.

Notes:
● Almirola earned his 13th top-15 of the season and his fourth top-15 in seven career Monster Energy NASCAR Cup Series starts at Kentucky.
● This is Almirola’s second straight top-15. He finished seventh in the series’ last race at Daytona (Fla.) International Speedway.
● This is Almirola’s second straight top-15 at Kentucky. He finished eighth in last year’s Kentucky 400.
● Kurt Busch won the Kentucky 400 to score his 31st career Monster Energy NASCAR Cup Series victory, his first of the season and his first at Kentucky. His margin of victory over second-place Kyle Busch was .076 of a second.
● There were seven caution periods for a total of 35 laps.
● Only 16 of the 36 drivers in the Kentucky 400 finished on the lead lap.
● Joey Logano remains the championship leader after Kentucky with an 11-point advantage over second-place Kyle Busch.

Aric Almirola, Driver of the No. 10 Valley Tech Ford Mustang for Stewart-Haas Racing:

“We had a really fast Valley Tech Ford. Johnny (Klausmeier, crew chief) and the team did a great job adjusting on it all night after we started off tight and eventually got our Mustang freed up. We were in a great position to come out of Kentucky with a good finish, but we ended up going the wrong direction on the final restart. It wasn’t the ending we wanted, but we had a strong weekend, and we’ve got a chance to do it all again in New Hampshire.”

The next event on the Monster Energy NASCAR Cup Series schedule is the Foxwoods Resorts Casino 301 on Sunday, July 21 at New Hampshire Motor Speedway in Loudon. The race starts at 3 p.m. EDT with live coverage provided by NBCSN and SiriusXM NASCAR Radio.