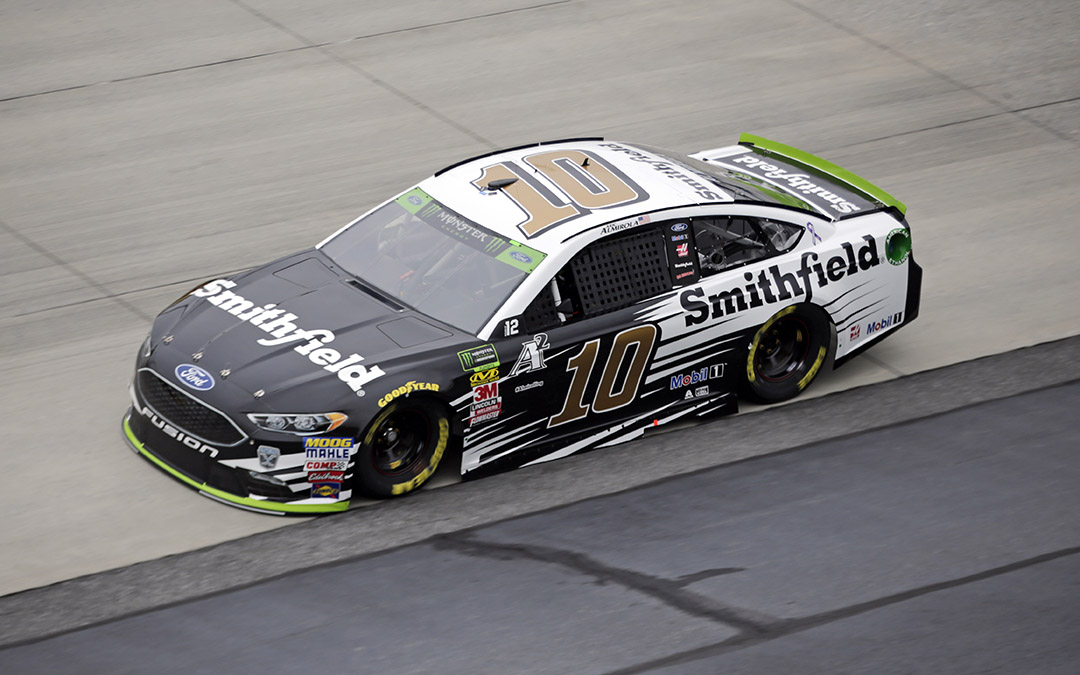 KANNAPOLIS, North Carolina (Oct. 17, 2018) – Aric Almirola and the No. 10 Smithfield Ford Fusion team for Stewart-Haas Racing (SHR) head into Kansas Speedway in Kansas City this weekend coming off a win Sunday at Talladega (Ala.) Superspeedway. The four-car SHR contingent dominated the superspeedway race by leading 155 of 193 laps. Almirola only led a single lap, the final one, but it was the most important lap. The Tampa native crossed the finish line in the Smithfield Bacon for Life Ford Fusion first to earn his first win while driving for SHR and the second Monster Energy NASCAR Cup Series win of his career.

Overall, SHR had a solid weekend at the 2.66-mile superspeedway, which started by seizing the first four starting positions during qualifying Saturday. Almirola’s victory was SHR’s first at Talladega in the team’s 10 year history. Kentucky Speedway in Sparta is the only remaining active track where SHR is winless.

Capturing the victory at Talladega also means Almirola and the No. 10 team automatically transfer to the Round of 8 in the Cup Series playoffs. While Almirola’s spot is secure in the Round of 8, it’s still vital for the team to perform at its highest potential and score maximum points this weekend at Kansas. Each point will be crucial for the No. 10 team as it works to advance to the Round of 4 at Homestead-Miami Speedway, where the 2018 Monster Energy NASCAR Cup Series champion will be crowned.

Almirola piloted a special bacon-themed Smithfield Ford Fusion at Talladega. The unique paint scheme coincides with Smithfield’s Bacon for Life promotion. Yes, it’s possible to win bacon for life. The sweepstakes can be entered by finding specially marked packages of Smithfield bacon in stores, then visiting Smithfield.com/BaconForLife and entering the unique code provided in the package. More than 1,000 runners-up will be awarded select bacon merchandise during the sweepstakes, which runs until Dec. 31.

The No. 10 team rolls into Kansas after qualifying fourth and finishing ninth at this year’s spring event there. In his 13 Cup starts at the 1.5-mile oval, Almirola has accumulated five top-10 finishes along with 69 laps led. Almirola finished ninth at Kansas last fall. Overall, the Smithfield driver has an average starting position of 15.8 and an average finishing positon of 19.8 at Kansas.

Almirola heads into Sunday’s race fifth in the standings with 3,087 points and, having automatically secured his spot in the Round of 8 with the Talladega victory, he will advance farther into the playoffs than ever has in his seven-year Cup Series career. All four SHR entries are still alive in the playoffs, making up 33.3 percent of the remaining playoff field with all four cars in the top-six in points.

Kansas is the 29th points-paying event during which the Smithfield livery has adorned Almirola’s No. 10 Ford Fusion. Smithfield, a brand of Smithfield Foods, which is based approximately five hours northeast of SHR headquarters in Smithfield, Virginia, is in its seventh season with Almirola and its first with SHR. Founded in 1936, Smithfield is a leading provider of high-quality pork products, with a vast product portfolio including smoked meats, hams, bacon, sausage, ribs, and a wide variety of fresh pork cuts.

Almirola’s Talladega win marked Ford’s 16th victory this season with SHR accounting for 11 of those. The manufacturer has seven Cup Series wins at Kansas with the most recent Ford win captured by SHR’s Kevin Harvick this past spring. All seven Ford drivers who remain in contention for the NASCAR playoffs have earned victories, the first time since 1997 that Ford has had seven different drivers visit victory lane.

Through the first 31 races this season, Almirola has earned one win with an average start of 16.8 and an average finish of 13.5 with three top-five finishes and 13 top-10s. He’s also led 181 laps this season, already a career best with five races remaining in the 2018 season.

How do you view going to Kansas? It has been one of your better tracks, but it’s also presented you with challenges.
“It’s great going to Kansas and being in the playoffs and being locked into the next round. I got hurt there last year in May and that was a big deal for me to go back there in October and rebound and kind of face the track, if you will. We went there and ran top-10, and that was a great day for me to kind of go and put that behind me. We went back to Kansas, ran well and it’s not on my radar anymore going into that race and thinking, ‘Hey, I broke my back here.’ This year in the spring with Stewart-Haas Racing, I ran in the top-10 almost the entire weekend and got a top-10 finish. Going to Kansas, I feel like I’ve put the whole back thing behind me and I don’t even think about it. I go there and it’s just another racetrack, and we just have to execute and show up with a fast racecar and, if we do that, we’ll get out of there with a good day and I think we have the capability to win there.”

As a crew chief, how do you prepare setup-wise for Kansas?
“The groove is fairly narrow, so you have to be careful not to step over the edge. The tires are on the harder side and they generate some heat. Later in the run, typically you lose rear grip more than other tracks, but you just have to make sure you really have your car balanced in the groove and really be able to move up later in the race.”

The previous race at Kansas was a night race. Traditionally, how different is the spring race from the fall race?
“Typically, the track gets freer going into the nighttime in the spring race. During the fall, the sun is out and sometimes the track will take more rubber and the groove will usually move up a little bit quicker than it does in the spring race.”

As we get close to ending this year, what has it been like working with Aric and the success you have had together?
“It has been great working with Aric. I like Aric outside of the racecar and we are friends outside of racing. He has a great attitude when he comes to the track and he’s always prepared. This is a really good opportunity for him and he’s making the most of it by being prepared every weekend.”