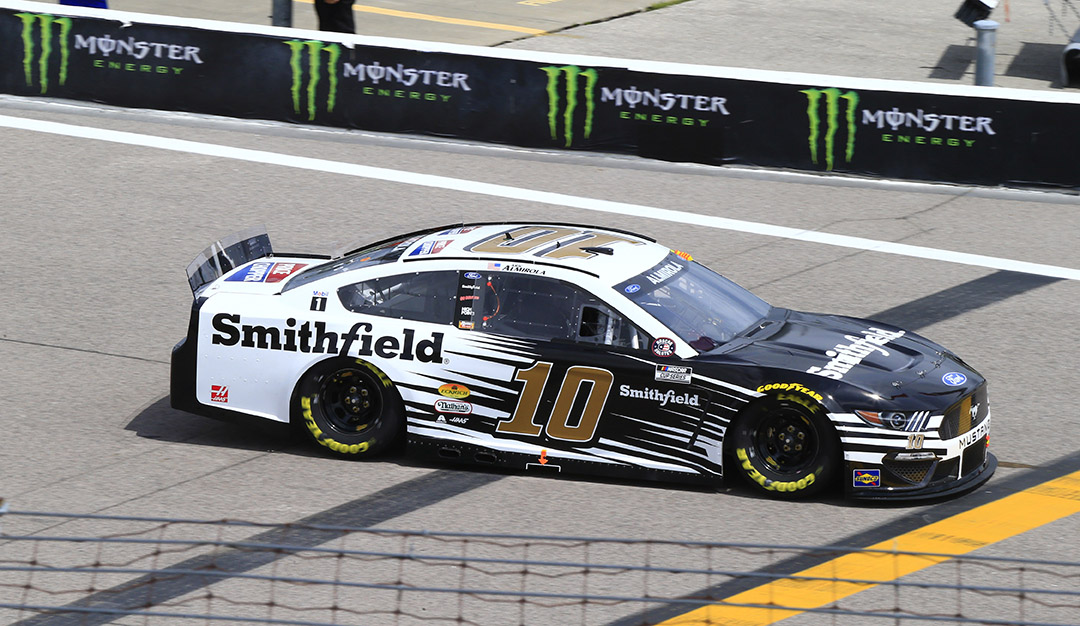 Uncontrolled Tire Puts Smithfield Team Back in the Pack

Stage 1 Recap (Laps 1-80):
● Aric Almirola started 18th and finished 18th.
● The No. 10 Smithfield Ford Mustang ran into trouble at the start of the race as it fell from 18th all the way back to 30th in the opening eight laps. Almirola reported that his car was loose on entry and tight on exit.
● Under the lap-25 competition caution, Almirola pitted for four tires, fuel and an air pressure adjustment to combat a car that was having trouble turning in the corners.
● Almirola restarted the race in 26th and quickly used his adjustments to pass the competition. He worked his way up to 18th before reporting that his Ford Mustang was tight and didn’t have the ability to move around the track like he wanted.
● The No. 10 Smithfield team pitted under the stage caution for four tires, fuel and another adjustment as Almirola asked the team to help him be more aggressive on the Stage 2 restart.

Stage 2 Recap (Laps 81-160):
● Almirola started 18th and finished 23rd.
● Almirola continued to struggle with a tight Ford Mustang as the second stage got underway. He fell back to 23rd and reported that the car still had trouble turning in the center.
● The Smithfield driver began reporting a chattering in the front tires on lap 108.
● On lap 119, the No. 10 pitted under green after making slight contact with the wall on the right rear. Almirola was scored 27th as he left pit road.
● The remainder of the second stage went caution-free. Almirola fought a tight Ford Mustang and struggled to pass lapped traffic after his pit stop to finish 23rd, one lap down.

Final Stage Recap (Laps 161-267):
● Almirola started 30th and finished 29th.
● From the drop of the green flag with 100 laps to go, Almirola’s battle to gain positions began. He raced for the Lucky Dog position with the No. 7 of Corey LaJoie, the No. 99 of Daniel Suárez and the No. 41 of teammate Cole Custer.
● On lap 189, Almirola reported that his No. 10 Smithfield Ford Mustang couldn’t carry any entry speed into the corners and that the tires couldn’t take any more.
● Almirola came down pit road on lap 212 for four tires, fuel and another adjustment. He exited 27th but immediately reported a vibration in the right rear and pitted to change the tire. To add to the blow, the team was also issued a penalty for an uncontrolled tire and forced to come down again to serve a pass-through penalty – putting him four laps down.
● The Smithfield driver fought to gain back his lost laps through wave-arounds on cautions, but he ultimately finished 29th, three laps down.

Notes:
● Kyle Busch won the Buschy McBusch Race 400 to score his 58th career NASCAR Cup Series victory, his first of the season and his second at Kansas. His margin over second-place Kevin Harvick was .336 of a second.
● There were seven caution periods for a total of 36 laps.
● Twenty-two of the 39 drivers in the Buschy McBusch Race 400 finished on the lead lap.
● Denny Hamlin remains the championship leader after Kansas with an 87-point advantage over second-place Martin Truex Jr.

Aric Almirola, driver of the No. 10 Smithfield Ford Mustang for Stewart-Haas Racing:
“Today just didn’t go our way in Kansas. The guys kept trying to make changes to my car on the pit stops, but it kept building tighter as the runs continued on. Then, we got hit with the vibration and the uncontrolled tire penalty in the final stage to put us four laps down. We just couldn’t recover from that late in the race.”

Next Up:
The next event on the NASCAR Cup Series schedule is the Goodyear 400 on Sunday, May 9 at Darlington (S.C.) Raceway. The race begins at 3:30 p.m. EDT with live coverage provided by FS1 and SiriusXM NASCAR Radio.