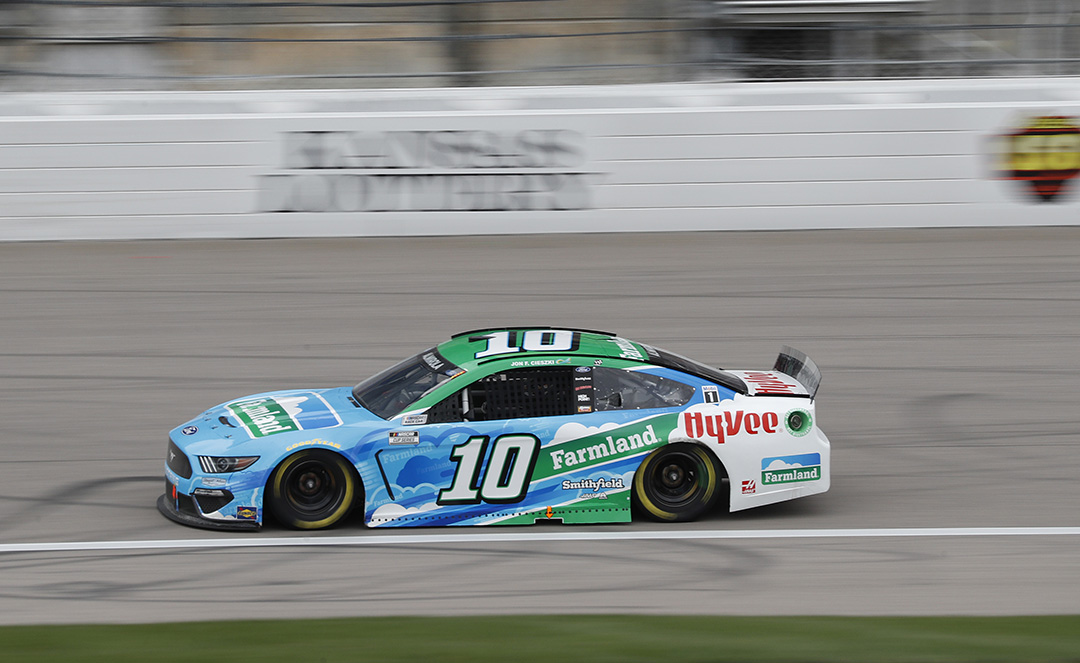 Stage 1 Recap (Laps 1-80):
● Aric Almirola started 20th and finished 23rd.
● Almirola drove into the 11th position just seven laps into the 267-lap race, but after the car tightened up he slipped back to 14th on lap 11 just as rain began to fall.
● Under caution after a 16-minute red flag, Almirola reported something was amiss with the Farmland/Hy-Vee Ford Mustang. He visited pit road for the team to look over the car and also received fresh Goodyear tires.
● The race returned to green on lap 16 with Almirola in the 25th position.
● While riding 26th, the driver of the No. 10 Farmland/Hy-Vee Mustang radioed that he was really tight on lap 60, just before going down a lap to the leaders.
● Almirola finished the first stage in the 23rd position before pitting at the break for tires, fuel and multiple adjustments for his Ford Mustang.

Stage 2 Recap (Laps 81-160):
● Almirola started 19th and finished 20th.
● The No. 10 Farmland/Hy-Vee Ford driver began the second stage in 19th, one lap down, and was able to maintain his position in the top-20 until a scheduled green-flag pit stop on lap 122.
● After the pit stop, Almirola was scored 26th, two laps down. He drove his way back into the top-20 on lap 149.
● Almirola completed the second stage in 20th and pitted at the break for tires and a wedge adjustment to help with a tight-on-exit handling condition.

Final Stage Recap (Laps 161-267):
● Almirola started 25th and finished 26th.
● The No. 10 Farmland/Hy-Vee Ford driver started the final stage 25th on lap 168. A caution on lap 173 allowed Almirola to pit for tires and adjustments while the leaders stayed out. He lined up 25th for the restart on lap 179.
● On lap 183, Almirola reported that he might have a loose wheel. He made a pit stop under green on lap 186 for four fresh tires, but a crew member over the wall too soon brought the Farmland/Hy-Vee driver back to pit road for a pass-through penalty.
● After serving his penalty, Almirola was scored four laps down. A caution on lap 217 allowed the No. 10 team to stay on track as the leaders pitted to gain a lap back.
● A caution on the lap 223-restart brought Almirola to pit road for tires and a chassis adjustment. He returned to the track in 27th on lap 229.
● The No. 10 Farmland/Hy-Vee Ford driver gained two positions in the final laps to finish 26th.

Aric Almirola, driver of the No. 10 Farmland/Hy-Vee Ford Mustang for Stewart-Haas Racing:
“It was a pretty tough day. We had good speed early on, but our Farmland/Hy-Vee Mustang was just too tight, and I couldn’t get it to turn without it getting really tight on exit. The guys did all they could, it’s just tough to come back from being a few laps down. We’ll regroup and head on to Martinsville.”

Next Up:
The next event on the NASCAR Cup Series schedule is the Xfinity 500 on Sunday, Oct. 31, at Martinsville (Va.) Speedway. It is the penultimate race of the 10-race playoffs and the final race in the Round of 8. It starts at 2 p.m. EDT with live coverage provided by NBC and SiriusXM NASCAR Radio.