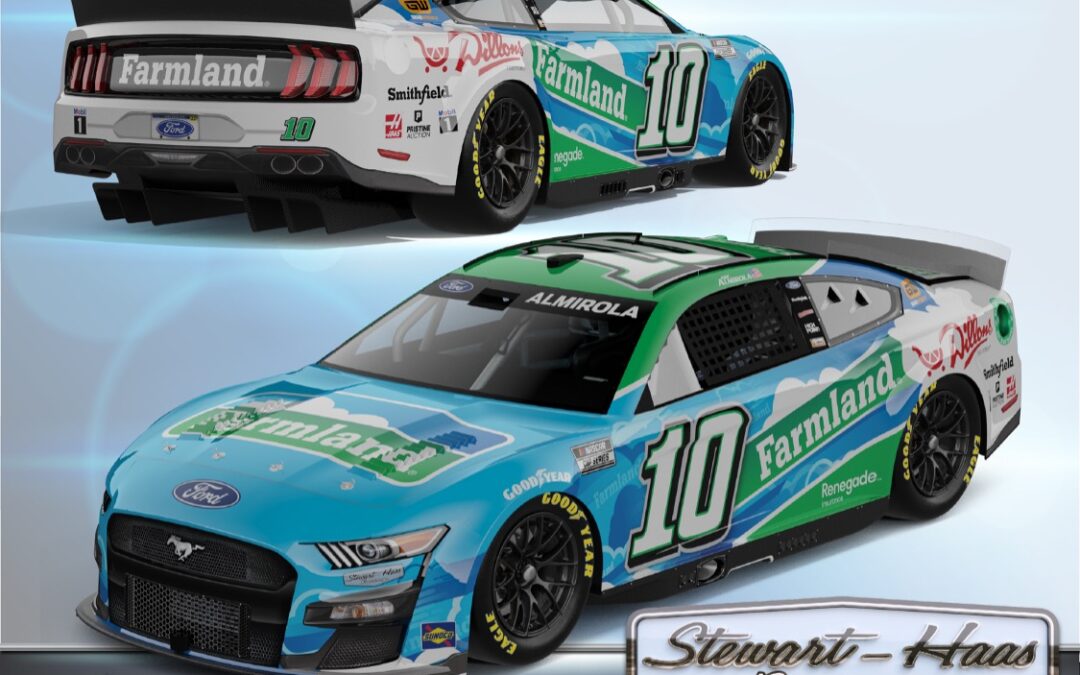 Notes of Interest
● History at Kansas: In 21 NASCAR Cup Series starts at Kansas, Almirola has seven top-10 finishes and has led 69 laps.

● Last weekend at Darlington (S.C.) Raceway, Almirola drove from a lap down to an 11th-place finish, which equaled his finishing position at Darlington in this year’s May race.

● 2022 Season: After 27 races this season, Almirola has earned two top-five finishes, seven top-10s, and has led six laps. His average finish and number of top-10s have bettered his totals for the entire 36-race 2021 season.

● Driver Points: Almirola arrives at Darlington 19th in the driver standings with 602 points.

● Farmland, which has been bringing great tastes to tables since 1959, will adorn the No. 10 Ford Mustang with a special blue, white and green paint scheme. For over 60 years, Farmland has been the brand of the Heartland that fuels hard work – bringing home the spirit of the farm. Whether it’s a morning meal, weekly tailgate, or note tucked into a school lunch, Farmland celebrates the big and small traditions shared daily with food. Hard work, prioritizing time with family, finding comfort in wholesome, hearty meals, and nourishing the community – Farmland has been committed to these values from day one, so consumers can enjoy high-quality, flavorful, and wholesome pork products today and for many years to come.

● Back for More: Earlier this year, Almirola announced that he would step down from fulltime racing following the 2022 season.Through the course of the year, Almirola has discovered a new balance between his passion for racing and dedication to his family. His wife Janice, and kids Alex and Abby, join him on most race weekends, oftentimes enjoying once-in-a-lifetime experiences together as they travel the country. His rapport with crew chief Drew Blickensderfer has flourished, and the intense pressure he had put on himself was replaced with the joy of simply being present. Not only did Almirola see a new perspective on the sport, but so did anchor partner Smithfield Foods, who broached the subject of Almirola returning to fulltime racing in 2023. On Friday, Aug. 26, Almirola, Stewart-Haas Racing, and Smithfield Foods announced his return with a multi-year agreement and the largest allotment of races since joining the team in 2018.

● Beyond the 10 YouTube Series: In 2022, Almirola is once again sharing his life beyond the No. 10 Smithfield Ford with season four of his award-winning YouTube series. Fans and media can subscribe on YouTube to see Almirola’s personality on and off the track. Episodes have already featured life as a dad, a husband and an athlete, and it gives fans a unique perspective on what goes on in the life of a professional NASCAR driver. Fans can also follow Almirola’s social media channels: @Aric_Almirola on Twitter and Instagram, and @AricAlmirola on Facebook.

Aric Almirola, Driver of the No. 10 Farmland Ford Mustang for Stewart-Haas Racing:

You came from a lap down to a solid 11th-place finish at Darlington last weekend. Does that build confidence going into the next few races?

“It just shows that this team has a lot of fight. That is one thing this team will always have and why I know we will continue to get better. Drew (Blickensderfer, crew chief) and this team know that it’s not over until it’s over. When we have days that our cars aren’t where we want them to be, we try to maximize the day, even if that’s aiming for an 11th-place finish. We’re not in the playoffs, but we’re surely going to race like it.”

You saw a lot of non-playoff drivers run up front at Darlington, and one even won the race. Your thoughts on that?

“The cars and the competition are just closest than ever. Almost every team has an opportunity to win in the playoffs, whether you’re in or you’re out. Our plan is to continue to run like playoff contenders and win us a race. There are some great tracks to do that at, including this weekend at Kansas. We didn’t get the finish we wanted earlier this year, but we had some speed. I’m just as motivated out of the playoffs as I would be in them, and that is the mindset we’ll continue through Phoenix.”

What are your thoughts about racing at Kansas?

“I’ve always enjoyed Kansas. I know that I did have a really bad accident there, but in my mind I just view that as a bad accident. It just happened at a place. It just so happened to be at Kansas. It could have happened anywhere. I don’t really put that on Kansas and so, every time I’ve been back since then, it’s never really been a thought that’s crossed my mind. I actually enjoy going to Kansas. I have friends in Kansas City who I enjoy spending time with that makes it even more enjoyable to be there and, on top of that, I love the racetrack. The racetrack is a really fun racetrack to run at for me and I’ve had a lot of success there and had a lot of really good runs there.”