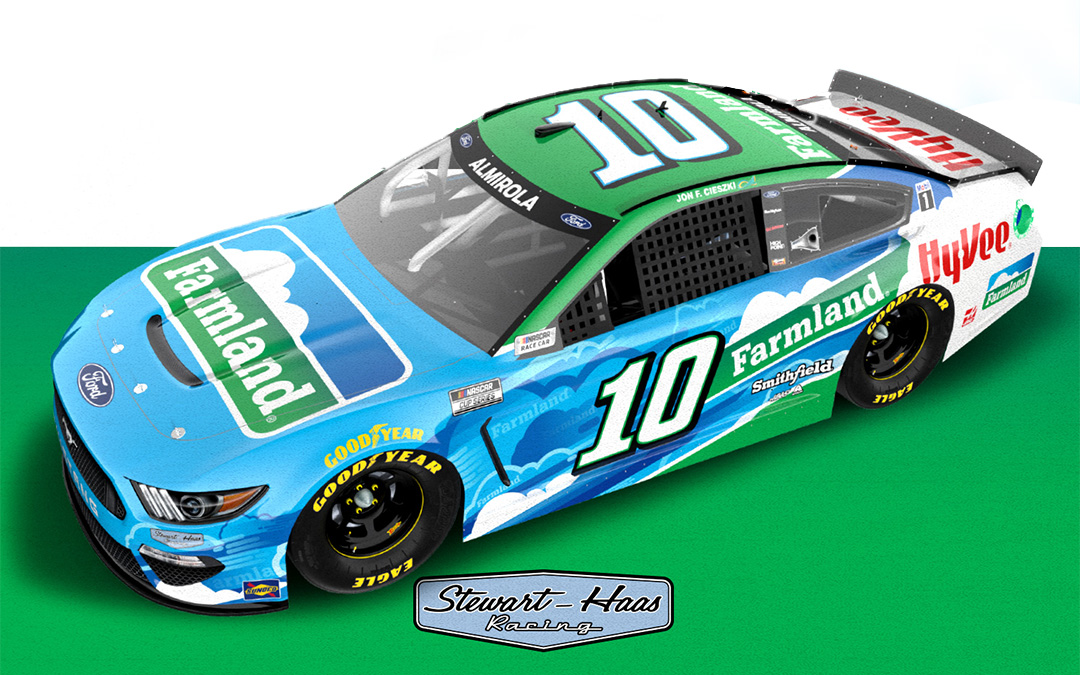 Notes of Interest
● History at Kansas: In 19 starts, Almirola has seven top-10 finishes and has led 69 laps.

● 2021: Almirola locked himself into the 2021 NASCAR Cup Series playoffs with his July 18 victory at New Hampshire Motor Speedway in Loudon. He led 46 laps around the flat, 1.058-mile oval en route to his third career NASCAR Cup Series win. After a year full of adversity and bad luck, the victory put the No. 10 team, which was 27th in the standings and facing a must-win situation if it was going to compete for this year’s championship, in prime position to earn one of the 16 coveted berths in the 10-race playoffs. Almirola’s award-winning YouTube series “Beyond the 10” captured his entire race day here.

● Farmland, which has been bringing great tastes to tables since 1959, will adorn the No. 10 Ford Mustang with a special blue, white and green paint scheme. As part of the paint scheme, Farmland launched a huge prize package valued at $4,750. The prize package includes two tickets to the Kansas Cup Series race May 15, 2022, airfare and hotel accommodations, a rental car, BBQ catering for a tailgate, and an extra $400 after the race if Almirola wins. To enter, follow @FarmlandFoods and comment #Sweepstakesentry.

● Hy-Vee returns to the rear quarterpanels, decklid and bumper of the No. 10 Ford this weekend. Hy-Vee is synonymous with quality, variety, convenience, healthy lifestyles, culinary expertise and superior customer service. Its slogan, “A Helpful Smile in Every Aisle,” expresses the foundation of the supermarket chain’s operating philosophy.

● Beyond the 10 YouTube Series: In 2021, Almirola continues to share his life beyond the No. 10 Ford with season three of his award-winning YouTube series. Fans and media can subscribe on YouTube to see Almirola’s personality on and off the track. Episodes have already featured life as a dad, a husband and an athlete, and it gives fans a unique perspective on what goes on in the life of a professional NASCAR driver. Fans can also follow Almirola’s social media channels: @Aric_Almirola on Twitter and Instagram, and @AricAlmirola on Facebook. Almirola’s latest Beyond the 10 episode gives a driver’s perspective of the NASCAR Next Gen car.

● Point standings: Almirola is currently 14th in the driver standings with 2,136 points.

Aric Almirola, Driver of the No. 10 Farmland/Hy-Vee Ford Mustang for Stewart-Haas Racing

What goals do you have for the remaining three races of the season?
“We’re sitting 14th in the standings right now, so finishing here or a spot better would be better than last year and the year before. Overall, our goal is to have a few more clean races without any issues or bad luck. Last weekend at Texas, we didn’t really get to see what kind of speed we had after all the damage in the first stage. We were lucky to make it through the way we did, but we’re usually really good at Texas and didn’t get to show that. Kansas will provide some good redemption if we can run a clean race.”

What are your thoughts when you head to Kansas?
“I’ve always enjoyed Kansas. I know that I did have a really bad accident there, but in my mind I just view that as a bad accident. It just happened at a place. It just so happened to be at Kansas. It could have happened anywhere. I don’t really put that on Kansas and so, every time I’ve been back since then, it’s never really been a thought that’s crossed my mind. I actually enjoy going to Kansas. I have friends in Kansas City who I enjoy spending time with that makes it even more enjoyable to be there and, on top of that, I love the racetrack. The racetrack is a really fun racetrack to run at for me and I’ve had a lot of success there and had a lot of really good runs there.”

What do you think of this weekend’s Farmland/Hy-Vee paint scheme?
“Everything about it just looks fresh. Love the colors. It should be bright on TV. I’m liking the red Hy-Vee on there, too. Let’s see if we can keep it as clean at the end of the race.”