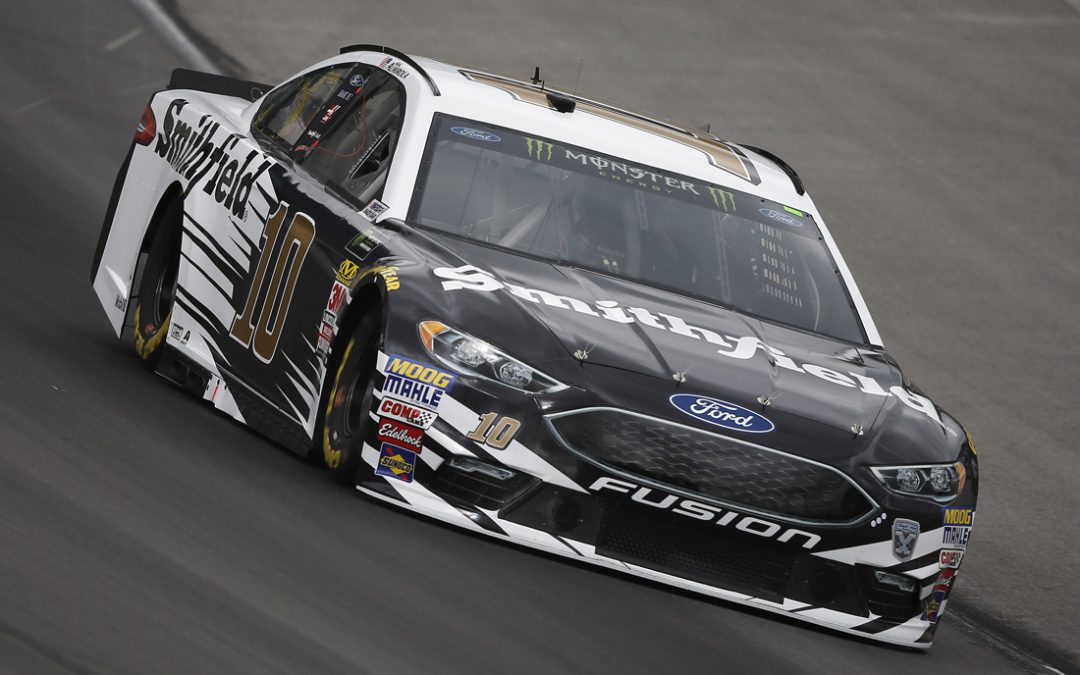 ARIC ALMIROLA
Primed for a Good Weekend in Kansas

KANNAPOLIS, North Carolina (May 9, 2018) – Aric Almirola and the No. 10 Smithfield Prime Fresh Pork Ford Fusion team for Stewart-Haas Racing (SHR) make their way to the Midwest for this Sunday’s Monster Energy NASCAR Cup Series race at Kansas Speedway in Kansas City. The four-car SHR operation heads into the weekend with more momentum than ever after a historic finish at Dover (Del.) International Speedway. For the first time ever, three of the SHR entries finished in the top-five with Almirola rounding out the four-car contingent in 11th place.

Almirola heads to Kansas looking for redemption after he was involved in an accident in last year’s May race that caused him to sit out the next seven Cup Series races last season with an injury. The 34-year-old is more focused than ever as the injury spurred Almirola to work harder on his physical fitness, which he’s maintained through this season. He is often seen cycling on the race weekends.

Kansas City is also a large market for Smithfield, with its Fresh division based approximately 20 miles from the racetrack. Almirola’s Smithfield Ford Fusion will have a different look this weekend with Smithfield’s Prime Fresh Pork collection being displayed on the No. 10 machine. Fittingly, there’s no better time than this weekend to purchase Smithfield’s premium line of all-natural fresh pork with Mother’s Day falling on Sunday. Almirola heads to Kansas Thursday morning to visit with the employees at Smithfield’s Kansas City office and to unveil this weekend’s Prime Fresh Pork paint scheme.

The Tampa native has 12 starts at Kansas and has earned four top-10 finishes there. Additionally, he’s led 69 laps at the 1.5-mile oval – the most laps he’s led at a single venue. Almirola finished ninth in his last start at Kansas and has an average starting position of 16.8. He has three starts there in the Xfinity Series with a best finish of 12th in October 2011, and two starts in the Camping World Truck Series with a best finish of seventh in May 2010. SHR has two wins at Kansas – Tony Stewart in October 2009 and Kevin Harvick in October 2016 – to go with 10 top-fives and 17 top-10s.

Fans can now enter for their chance to win Smithfield’s Smoke Machine Mustang designed by team co-owner Stewart with the help of drifting champion Vaughn Gittin Jr. They helped create a one-of-a-kind Ford Mustang RTR Spec 3 that will be given away to one lucky fan. Fans can register for their chance to win the suped-up Mustang and a trip to November’s Ford Championship Weekend at Homestead-Miami Speedway by visiting SmithfieldRacing.com, or by texting SMOKE to 82257.

Kansas marks the 10th weekend the Smithfield livery has adorned Almirola’s No. 10 Ford Fusion. Smithfield, a brand of Smithfield Foods, which is based approximately five hours northeast of SHR headquarters in Smithfield, Virginia, is in its seventh season with Almirola and its first with SHR. Founded in 1936, Smithfield is a leading provider of high-quality pork products, with a vast product portfolio including smoked meats, hams, bacon, sausage, ribs, and a wide variety of fresh pork cuts.

Last weekend at Dover, Harvick netted Ford’s sixth win this season, most among all manufacturers. Five of the six wins have been earned by SHR drivers – Harvick has four wins and Bowyer one. Additionally, Fords have led 2,147 laps so far this year, which is twice as many as any other manufacturer.

Aric Almirola: Driver of the No. 10 Smithfield Prime Ford Fusion for Stewart-Haas Racing:

It’s been a year since your accident at Kansas. How does it feel to go back again?

“I’m looking forward to going back to Kansas. I went back there in October last year, a few months after my injury, and actually got a top-10. So that was kind of sweet revenge of going back to that track and having a good run and kind of putting the accident behind me. That was just an unfortunate event that took place. The circumstances just happened perfectly and I was in a crash and broke my back, but I can’t think about that and worry about that. I’m looking forward to going to Kansas and putting ourselves in position to go win.”

What does Mother’s Day mean to you?

“The mom in the family is the glue that holds it all together. My mom was certainly my taxi driver, my motivator, and facilitator – all of those things. I’m forever grateful for that. Now, to be married to my wife Janice and to see her be the mother to our two children (Alex and Abby) and really do the same things that were done for me growing up – making sure the house is running perfectly, and making sure everybody has everything they want, even if she doesn’t have what she wants. All of the sacrifices that go along with being a mom is incredible. I’m extremely thankful and grateful to have two incredible women in my life who are great mothers.”