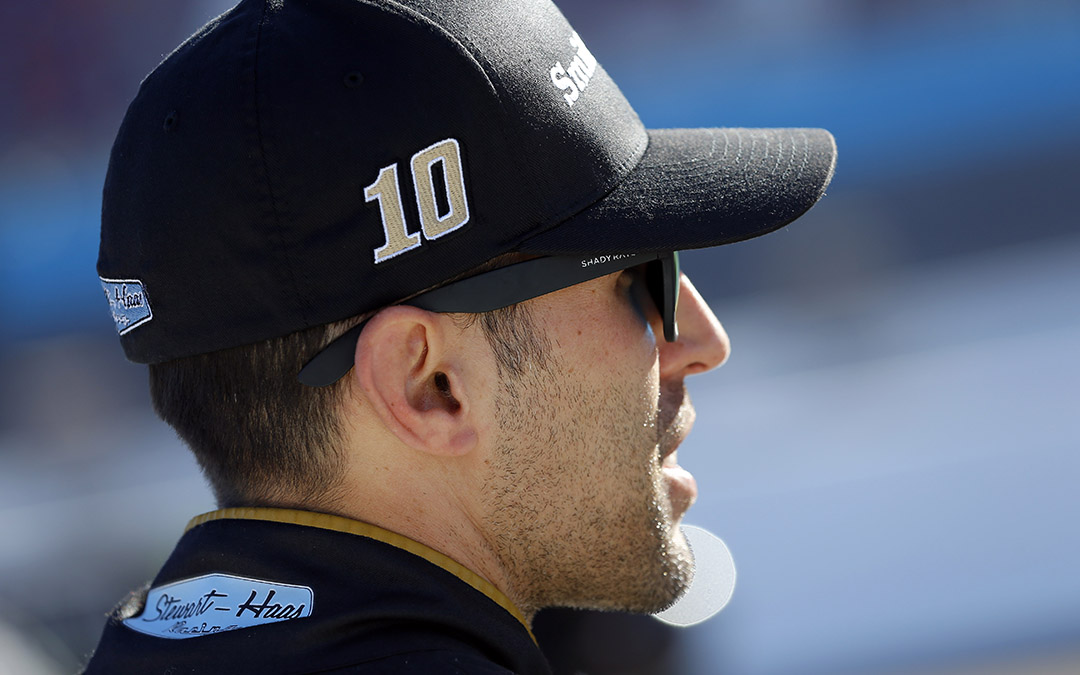 KANNAPOLIS, North Carolina (May 8, 2019) – Aric Almirola and the No. 10 Smithfield Ford Mustang team for Stewart-Haas Racing (SHR) make their way to the Midwest for this Sunday’s Monster Energy NASCAR Cup Series race at Kansas Speedway in Kansas City.

Almirola heads to Kansas looking for redemption after he was involved in an accident in the May 2017 race there that caused him to sit out the next seven Cup Series races with an injury. The 35-year-old is more focused than ever as the injury spurred Almirola to work harder on his physical fitness, which he’s maintained through this season. He is often seen cycling on the race weekends and working out every week at SHR’s gym.

“After I broke my back, I started to take exercise – specifically range of motion and mobility – more seriously,” he said. “It taught me a lot about myself and brought me to a new level of physical fitness. I used to just go in the gym and lift whatever I felt like, but now I understand the importance of preventing injuries and recovering to be in peak condition.”

Kansas City is an important market for Smithfield, whose Fresh division is based approximately 20 miles from the racetrack. Fittingly, Almirola’s diet consists of Smithfield’s premium line of all-natural fresh pork, which is packed with protein to keep him in the best physical condition possible for race weekends, including Saturday night’s Ally Digital 400 at Kansas.

The Tampa native has 14 career starts at Kansas and has earned six top-10 finishes there, including the last two in a row. Additionally, he’s led 69 laps at the 1.5-mile oval – the second-most laps he’s led at a single venue. Almirola finished ninth in his last start at Kansas. He also has three starts there in the NASCAR Xfinity Series with a best finish of 12th in October 2011, and two starts in the NASCAR Gander Outdoors Truck Series, with a best finish of seventh in May 2010. SHR has three wins at Kansas – Tony Stewart in October 2009 and Kevin Harvick in October 2016 and May 2018 – to go with 11 top-fives and 21 top-10s in 58 starts.

In Almirola’s three starts on 1.5-mile tracks this season, he has earned one pole and three top-10s with 39 laps led.

“I feel really good about heading to Kansas this weekend and getting back to the 1.5-mile tracks,” he said. “We have had some bad luck and have made a few mistakes at the short tracks, so I’m ready to get to a track that we know we have to be good at because those are the tracks that make up the majority of the season.”

Kansas marks the ninth weekend the Smithfield livery has adorned Almirola’s No. 10 Ford Fusion. Smithfield, a brand of Smithfield Foods, which is based approximately five hours northeast of SHR headquarters in Smithfield, Virginia, is in its eighth season with Almirola and its second with SHR. Founded in 1936, Smithfield is a leading provider of high-quality pork products, with a vast product portfolio including smoked meats, hams, bacon, sausage, ribs, and a wide variety of fresh pork cuts.

Ford has earned seven Cup Series wins at Kansas. SHR’s Harvick is the defending event winner at the 1.5-mile oval.

Almirola heads to Kansas 11th in the driver standings with 309 points – 151 behind the leader and 10 behind teammate Clint Bowyer for 10th place. He’ll look to close the points gap this weekend by aiming toward his season-best points position of fifth.

It’s been two years since your accident at Kansas. How does it feel to go back again?
“I’m looking forward to going back to Kansas. I’ve had two recent top-10s there, so that was kind of sweet revenge of going back to that track and having a good run and kind of putting the accident behind me. That was just an unfortunate event that took place. The circumstances just happened perfectly and I was in a crash and broke my back, but I can’t think about that and worry about that. I’m looking forward to going to Kansas and putting ourselves in position to go win.”

Notes of Interest:
● Aric Almirola will make his 292nd career Monster Energy NASCAR Cup Series start Saturday night at Kansas Speedway.
● Almirola has six career top-10 finishes at Kansas, along with 69 laps led. He will race for his third straight top-10 at Kansas and his fourth straight top-10 at a 1.5-mile oval this season.
● Ford has earned seven wins at Kansas. SHR teammate Kevin Harvick is the defending event winner.
● SHR has three Cup Series victories at Kansas (Tony Stewart in October 2009 and Harvick in May 2018 and October 2016), plus 11 top-five finishes and 21 top-10s in 58 starts.
● Career: Almirola has career totals of two wins, two poles, 16 top-five finishes, 56 top-10s and 456 laps led in 290 starts.
● 2019: Almirola has earned one pole, one top-five finish, seven top-10s and has led 99 laps in 11 races this season.
● Last win: Almirola’s Oct. 14, 2018 win at Talladega was his most recent in the Cup Series.
● Point standings: Almirola is 11th in the Cup Series standings with 309 points, 151 out of first place.
● Crew chief Johnny Klausmeier is in his second full-time season as a Cup Series crew chief. The Perry Hall, Maryland, native transitioned from an engineer to Almirola’s crew chief for the 2018 season. Klausmeier has one win as a substitute crew chief while filling in for Tony Gibson at Pocono (Pa.) Raceway in June 2016, and one win as a crew chief for Almirola last fall at Talladega. As a race engineer at SHR, Klausmeier worked with drivers Ryan Newman, Danica Patrick and Kurt Busch.
● Smithfield rejoined SHR this season and will be the primary partner for the majority of the season on the No. 10 Ford Mustang piloted by Almirola. Founded in 1936, Smithfield is a leading provider of high-quality pork products, with a vast product portfolio including smoked meats, hams, bacon, sausage, ribs, and a wide variety of fresh pork cuts.