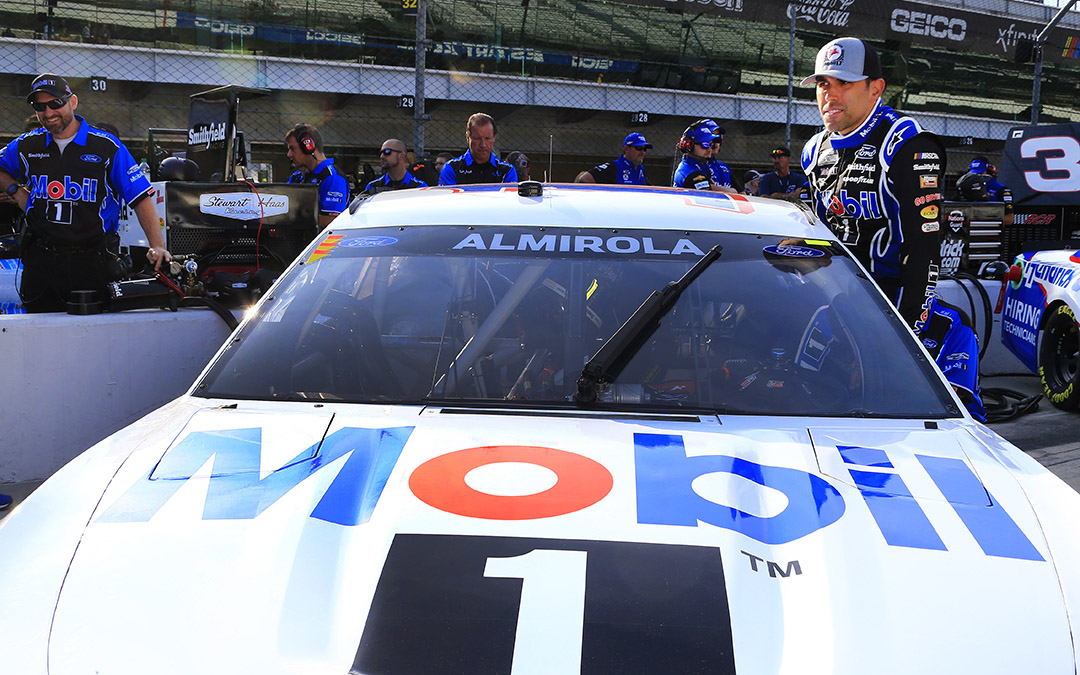 Stage 1 Recap (Laps 1-15):
● Aric Almirola started 18th and finished 39th.
● The No. 10 Mobil 1 Ford was nearly forced off the track during the first lap, resulting in Almirola falling to 23rd.
● On lap eight, the No. 7 car made contact with Almirola’s right-front fender.
● Almirola radioed he had a tire rub. He was forced to pit under green-flag conditions for slight repairs and for fresh tires.
● The No. 10 team was in the Lucky Dog position to rejoin the lead lap. Almirola opted to pit twice under the caution period to repair damage and restarted at the rear of the field.

Final Stage Recap (Laps 36-95):
● Almirola started 20th and finished 19th.
● On the restart, the field stacked up into the first few turns and left Almirola with nowhere to go.
● The Mobil 1 driver was forced to the inside. There, his No. 10 made contact with other cars and the elevated rumble strip, causing a spin.
● The caution was called for debris. Almirola pitted to assess the damage to his racecar and take fresh tires.
● When racing resumed, the No. 10 team pitted again under green to repair another tire rub, forcing Almirola a lap down.
● The caution was called for debris on lap 72.
● The No. 10 team opted to pit during the caution period for four fresh tires and fuel. Almirola was still scored one lap down.
● The red flag was called on lap 78 for a multicar incident, pausing the race for 19 minutes.
● Almirola rejoined the lead lap and restarted 29th before another caution was called on lap 89 for a multicar accident. He restarted just outside the top-20 and crossed the finish line 19th.

Aric Almirola, driver of the No. 10 Mobil 1 Ford Mustang for Stewart-Haas Racing:
“Not the day we wanted for our Mobil 1 Ford team, but we certainly made the most of it. We got caught up there with nowhere to go and took on a lot of damage. The guys worked hard all day to keep us on the lead lap. We never gave up all day with a torn-up racecar to get ourselves a top-20. On to Michigan.”

Next Up:
The next event on the NASCAR Cup Series schedule is the FireKeepers Casino 400 on Sunday, Aug. 22, at Michigan International Speedway in Brooklyn. The race starts at 3 p.m. EDT with live coverage on NBCSN and SiriusXM NASCAR Radio.