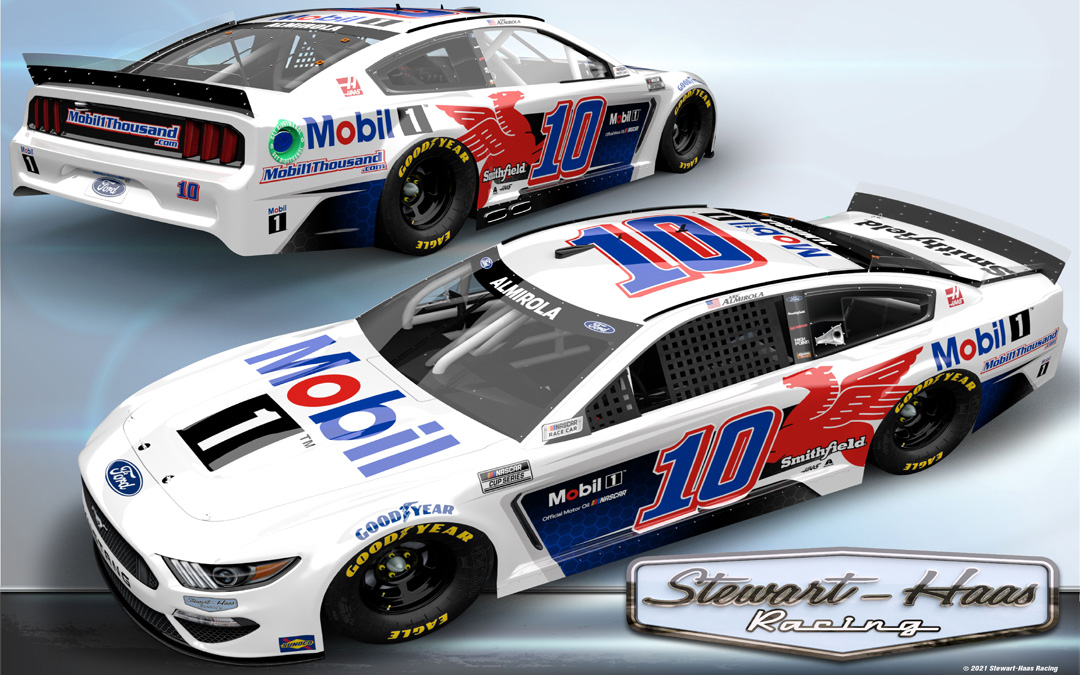 ● Mobil 1, the official Motor Oil of NASCAR since

2003, will adorn the No. 10 Ford Mustang this weekend on the Indianapolis Motor Speedway road course for the first time this season. Mobil 1 products are used throughout the racecar and they extend beyond just engine oil. Power steering fluid, transmission fluid, gear oil and driveline lubricants from Mobil 1 give Almirola and Stewart-Haas Racing (SHR) a technical advantage over their counterparts by reducing friction, heat and rolling resistance, which will be even more important with the NASCAR Cup Series debuting on the Indy road course, where teams and drivers will push their cars to the limit.

● This Mobil 1 paint scheme is the first of its kind by sporting the Mobil 1 Thousand sweepstakes and featuring the brand’s iconic Pegasus and the Mobil1Thousand.com URL on the back. Mobil 1 Thousand is a weekly contest guaranteeing that if Mobil 1 wins, fans win. Throughout the remainder of the season, one fan will win $1,000 or more if a NASCAR Cup Series driver who uses Mobil 1 scores the victory. Almirola’s win July 18 at New Hampshire Motor Speedway in Loudon ensured one lucky fan landed the $3,000 jackpot. The sweepstakes remains open through the 2021 NASCAR season, with even higher prize totals for the playoffs and special bonuses for cutoff races. All fans need to do is sign up at Mobil1Thousand.com for a chance to win.

● Last weekend on the road course at Watkins Glen (N.Y.) International, Almirola started eighth and ran in and around the top-15 for the majority of the race, ultimately crossing the finish line 16th.

● Road-Course History: Almirola has 27 road-course starts in the NASCAR Cup Series. He has two top-10 finishes with a best of eighth at Sonoma (Calif.) Raceway, five top-20s at Watkins Glen (N.Y.) International with a best finish of 12th, three top-20s on the Charlotte (N.C.) Motor Speedway Roval with a best finish of 14th, and a top-12 finish in the non-points Busch Clash Feb. 9 on the Daytona (Fla.) International Speedway road course – his best road-course finish of the year.

● Crew chief Mike Bugarewicz is no stranger to visiting a road-course victory lane. In 2016, Bugarewicz won at Sonoma with SHR co-owner and NASCAR Hall of Famer Tony Stewart during his final year as a fulltime driver in the NASCAR Cup Series.

● On July 18 at New Hampshire, Almirola claimed the victory after leading 46 laps on the 1.058-mile flat oval to earn his third career NASCAR Cup Series win in 375 starts. After a year full of adversity and bad luck, the victory put the No. 10 team, which was 27th in the standings and facing a must-win situation if it was going to compete for this year’s Cup Series championship, in prime position to earn one of the 16 coveted berths in the 10-race playoffs that begin Labor Day weekend. Almirola’s award-winning YouTube series “Beyond the 10” captured his entire race day here.

● Beyond the 10 YouTube Series:In 2021, Almirola continues to share his life beyond the No. 10 Ford with season three of his award-winning YouTube series. Fans and media can subscribe on YouTube to see Almirola’s personality on and off the track. Episodes have already featured life as a dad, a husband and an athlete, and it gives fans a unique perspective on what goes on in the life of a professional NASCAR driver. Fans can also follow Almirola’s social media channels: @Aric_Almirola on Twitter and Instagram, and @AricAlmirola on Facebook. Almirola’s latest Beyond the 10 episode addresses the question “are NASCAR drivers athletes” in honor of the Olympic break.

● After the season’s first 23 points-paying events, Almirola and the Mobil 1 Ford team sit 14th in the playoff standings with 398 points, 519 behind leaders Denny Hamlin and Kyle Larson.

Where do you feel the No. 10 team’s road-course program is at so far this season?
“It’s a work in progress, but we’ve made strides each weekend even though the results don’t show it. We’ve been more competitive in and around the top-10 than ever before and I’ve made fewer mistakes on my end. We have tried different things setup-wise and strategy-wise and have continued to build a notebook off of that. It’s Buga (Mike Bugarewicz) and my second year together, but first year with tracks like Sonoma, Watkins Glen, Circuit of the Americas, Road America and Indy’s road course due to last year’s postponements and these new tracks on the schedule.”

What are your thoughts on racing the Indianapolis road course this weekend instead of the oval?
“If I’m being honest, I’m sad about it – to be just honest. I think racing on the oval was so cool just because I was a kid and went and watched an Indy 500 back in the late ’90s. It was a special place and to race on the oval was just special. I mean, you think about the history of that racetrack and the people that have run around that rectangular racetrack and crossed that yard of bricks and all those things, and all the races that went on before you dating back to the early 1900s, it’s just a very special place. So, to not race on the oval is weird. I’ll certainly miss it, but I have no doubt that we will put on an exciting race on the road course and it will be a lot of fun to try and figure that place out. These new road courses have been favorable with the fans, so I hope we put on a good show for them.”

What does it mean to have Mobil 1 as the primary sponsor of your Ford Mustang this weekend?
“It means having an advantage, honestly. When you go to a new track like this, every team is going to do whatever they can to have a technical advantage on the competition, and we’re already a step ahead of them with Mobil 1 under the hood. We’re going to be pushing these cars to the limit in practice to get all we can, and we have to trust that our equipment can handle it. Thanks to Mobil 1, we know we have the best oil and fluid possible to push our Ford Mustangs to the limit.”