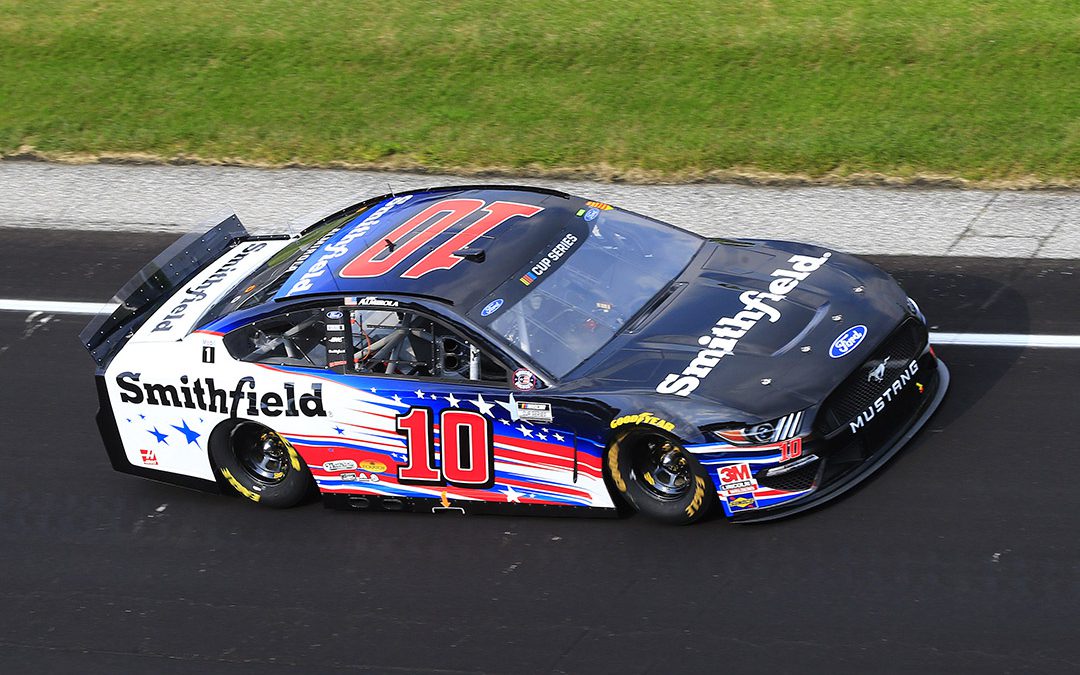 Stage 1 Recap (Laps 1-50):
● Aric Almirola started fifth and finished 20th.
● The No. 10 Smithfield Patriotic Ford drove to third place on lap 21 after pitting for two tires under the competition caution.
● Almirola reported a vibration and pitted for four tires and fuel on lap 30.
● Almirola pitted again on lap 42 under caution. He was scored back on the lead lap.
● He pitted at the end of the stage for four tires, fuel and air pressure adjustments.

Stage 2 Recap (Laps 51-100):
● Almirola started 19th and finished 11th.
● The No. 10 Ford driver reported more vibrations on lap 76 and pitted under the caution period for four tires and fuel.
● Almirola restarted 12th on lap 91.
● He drove as high as 10th place before reporting tight-handling conditions.
● Almirola pitted the Smithfield Ford at the end of the stage for four tires, fuel and adjustments.

Final Stage Recap (Laps 101-161):
● Almirola started 14th and finished third.
● Almirola pitted on lap 134 under caution for four tires, fuel and adjustments. He came off pit road eighth.
● The Smithfield Ford driver battled his way to fifth on lap 139.
● Almirola passed teammate Cole Custer for fourth on lap 145.
● The caution was called on lap 153 with Almirola scored in third.
● On the two-lap shootout, Almirola held his third-place position to earn his best Brickyard 400 result.

Aric Almirola, driver of the No. 10 Smithfield Patriotic Ford Mustang for Stewart-Haas Racing:
“This Smithfield Ford team continues to impress me. We have such hard working people at the shop making us better and working insane hours. We’re at a point now that every track we show up to is expected to be a top-five run. This was my best finish at Indy. To have a shot at winning one of the most historic races in NASCAR and, as a young boy aspiring to race here, it’s such a good feeling to have our best finish – especially with the day we had. We’re headed to tracks that I feel confident at. We have been finishing top-five at some of my worst tracks statistically. We’re in a points position now that allows us to gamble a little more. A win is coming.”

Notes:
● This was Almirola’s fifth straight top-five. He finished fifth June 14 at Homestead-Miami Speedway, third June 22 at Talladega (Ala.) Superspeedway, third June 27 at Pocono (Pa.) Raceway and fifth last Sunday at Pocono.
● This was Almirola’s eighth top-10 of the season and his first top-10 in nine career NASCAR Cup Series starts at Indianapolis.
● Almirola’s third-place result bettered his previous best finish at Indianapolis – 13th, earned in 2017.
● Kevin Harvick’s margin of victory over second-place Matt Kenseth was .743 of a second.
● There were nine caution periods for a total of 43 laps.
● Only 19 of the 40 drivers in the race finished on the lead lap.
● Harvick remains the championship leader after Indianapolis with an 85-point advantage over second-place Chase Elliott.

Next Up:
The next event on the NASCAR Cup Series schedule is the Kentucky 400 on Sunday, July 12 at Kentucky Speedway in Sparta. The race starts at 2:30 p.m. EDT with live coverage provided by FS1 and SiriusXM NASCAR Radio.