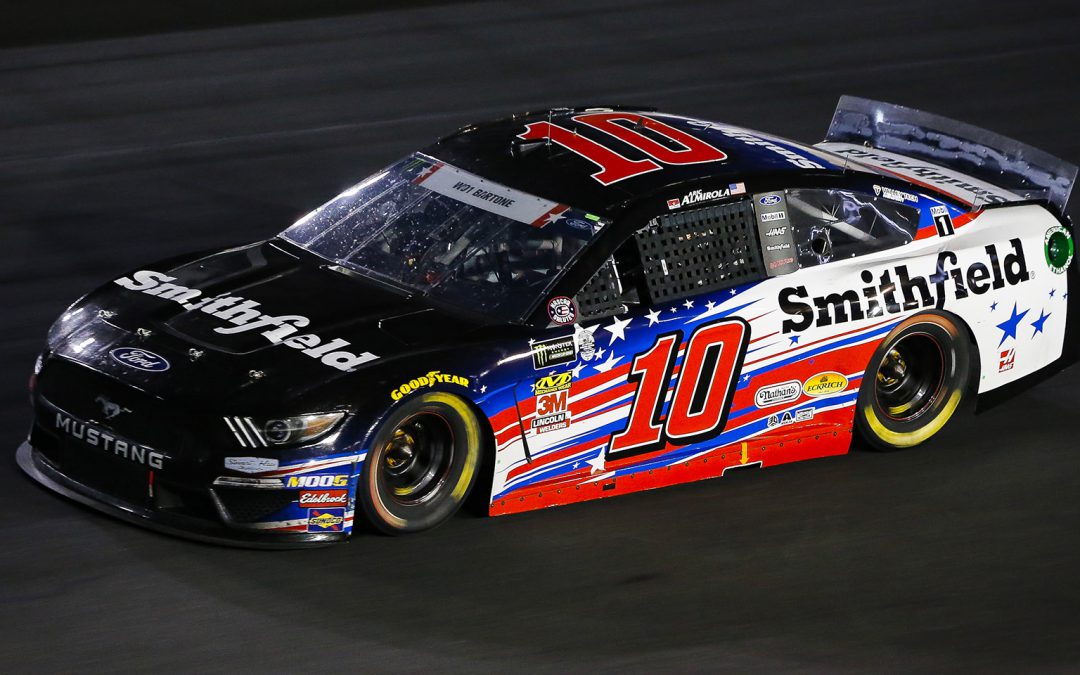 KANNAPOLIS, North Carolina (June 30, 2020) – Aric Almirola, driver of the No. 10 Smithfield Patriotic Ford Mustang for Stewart-Haas Racing (SHR), heads to a crown jewel of races this weekend, Sunday’s Brickyard 400 at Indianapolis Motor Speedway, in hopes of kissing the bricks for the first time in his career.

His four top-fives this season ties his season high earned in 2018, when he raced his way to the semifinal playoff round and finished fifth in the season standings.

The No. 10 Ford driver sits ninth in the playoff standings for his career best points position after 15 races. In his first two seasons at SHR in 2018 and 2019, Almirola was 11th in the standings after 15 races. It’s one of the best stretches of his career. The next comparable stretch was from October 2018 through March 2019, when he posted 11 top-10 finishes in 13 races, and his two finishes outside the top-10 were 11th at Martinsville and 32nd at Daytona.

This weekend, the 36-year-old native of Tampa, Florida, looks to continue the momentum with confidence at a track he feels he can continue his top-five streak. While Almirola has yet to earn a top-10 at Indianapolis, he sees this year as a completely blank slate.

“Indy is a place that is very similar to the tunnel turn at Pocono,” he said. “I felt like we were really good in that turn last weekend. As a driver, it always feels good to know you’re heading to a track that has a similar feel to the one you just earned a third- and fifth-place finish at. ‘Buga’ (crew chief Mike Bugarewicz) and all the guys back at the shop have been working their tails off to keep up with the new schedule and it’s really showing. We have showed up as a completely new team in the last four races. If we can continue to race as clean as we have been, with no hiccups or bad luck, we’re going to be serious contenders this year.”

Almirola will run a special red, white, and blue patriotic paint scheme with Smithfield adorning the hood of his racecar at Indy. Smithfield Foods Inc., who will sponsor Almirola’s car this weekend and at the majority of races this season, is an American food company with agricultural roots and a global reach. Its 40,000 U.S. employees are dedicated to producing “Good food. Responsibly®,” and have made it one of the world’s leading vertically integrated protein companies.

Aric Almirola: Driver of the No. 10 Smithfield Patriotic Ford Mustang for Stewart-Haas Racing:

What was your first memory of Indianapolis Motor Speedway?

“I was 12 or 13 racing go karts at the time. My family decided to travel to Indiana for Race Week. We went from track to track watching all these different races. As a kid, I was in heaven. It was so much fun. We capped it all off with the Indy 500. It was incredible to see the amount of people there were. Just being in that big of a crowd was crazy. I was used to going to local short tracks with a few thousand people. Never in my wildest dreams had I ever thought I would see a couple hundred thousand people in one place.”

What was your first NASCAR memory at Indy?

“My first memory of racing at Indy was cool. My first Cup races, I remember getting permission to ride my bike around the track and, when I did, I was in awe. To think as a young boy from Tampa, Florida, with big dreams, to here I am about to race in the Brickyard 400 – it was a memory I’ll never forget.”

Why is Indy such a crown jewel race, and how tough is it to get around the track?

“Racing around Indy is interesting because, as a driver, it’s extremely cool racing around there knowing the history of the motor speedway. It has an aura about it like Augusta and Fenway Park. It’s a really special place for auto racing. To go there and race is really cool, but it is extremely difficult to race there. It gets single file and there is no banking, so we rely heavily on aerodynamics and downforce to handle when you don’t have good air pushing down on the car because of traffic. Indy is probably the most difficult track to drive your car in traffic.”

Notes of Interest:
● Almirola will make his ninth start in the NASCAR Cup Series at Indianapolis Motor Speedway this weekend to bring his total of career Cup Series starts to 332.
● Almirola will race for his fifth consecutive top-five finish this weekend. He has earned seven top-10s this season.
● With Almirola’s four top-five finishes this season, he has tied his season high, earned in 2018 when he raced his way to the semifinal playoff round and finished fifth in the season standings.
● Career: Almirola has career totals of two wins, two poles, 22 top-five finishes, 68 top-10s and 627 laps led in 331 starts.
● Points: Almirola sits ninth in the driver standings with 431 points – 153 behind leader and SHR teammate Kevin Harvick.
● Last win: Almirola’s Oct. 14, 2018 win at Talladega (Ala.) Superspeedway was his most recent in the Cup Series.
● ‘Beyond the 10’ – Almirola is back with season two of his YouTube documentary series, where fans can get VIP, behind-the-scenes access by subscribing to his YouTube channel. Episodes showcase never-before-seen footage of Almirola at the racetrack, on iRacing, and “A Day in the Life” during the week, as well as all that goes into a NASCAR Cup Series driver’s season. Click here to subscribe on YouTube and watch the latest episode.
● Crew chief Mike Bugarewicz is in his fifth full-time season at SHR and his first with Almirola. To learn more click here.