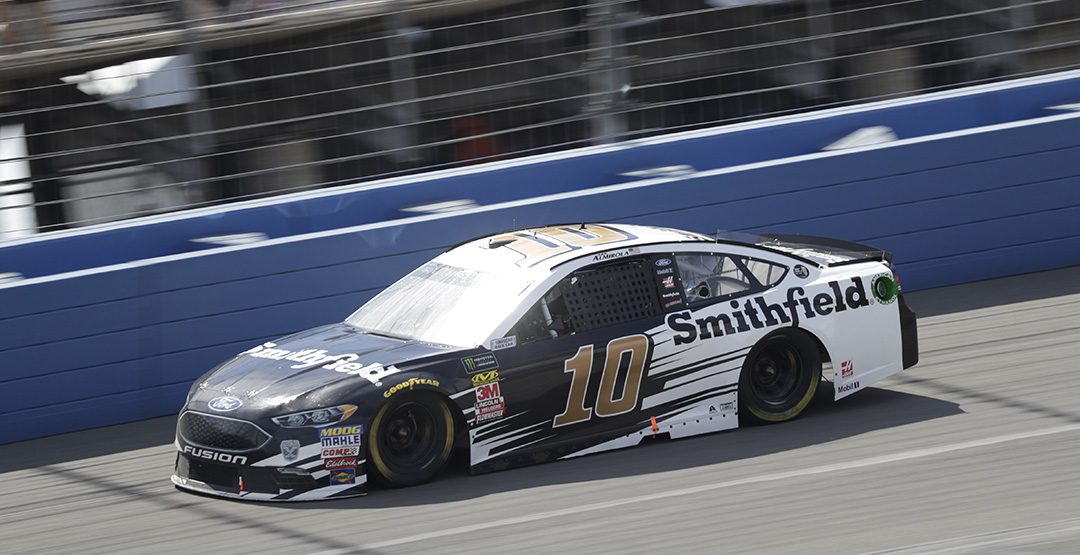 KANNAPOLIS, North Carolina (Sept. 5, 2018) – The No. 10 Smithfield Ford Fusion team for Stewart-Haas Racing (SHR) with Aric Almirola behind the wheel heads to Indianapolis Motor Speedway this weekend for the final race of the Monster Energy NASCAR Cup Series regular season. Almirola and his three SHR teammates have all clinched spots in the 16-driver Cup Series playoff field that will vie for the championship over the final 10 weeks of the season, culminating Nov. 18 at Homestead-Miami (Fla.) Speedway.

This is the second time in Almirola’s Cup Series career that he has the chance to vie for the championship. The 34-year-old previously contended for the championship in 2014. This season also marks the first time crew chief John Klausmeier enters the playoffs in his role as the leader of a team. Currently, Klausmeier is the only first-year crew chief in the running for this year’s ultimate prize. Even though it’s the University of Maryland, Baltimore County graduate’s freshman year as a crew chief, he’s experienced when it comes to playoff pressure from his engineering tenure with SHR driver Kurt Busch.

SHR has enjoyed its most successful season as a four-car contingent in 2018. SHR so far is the only four-car team to have all of its entries qualified for the playoffs. “It’s hard, and to have an organization like this that can put all four cars into the playoffs, it speaks a lot about the teams and the drivers,” Almirola said. “But really, it tells you a lot about the people who show up at the shop every day. That’s where I feel like a large chunk of the success comes from because, without those people showing up at the shop 6 a.m. every day to build fast cars, we can’t do our job at the racetrack.”

Almirola heads to Indy with six Cup Series starts at the iconic speedway. He has a best finish of 13th, which he earned last year at the 2.5-mile, rectangular track. The Ford driver also has one NASCAR Xfinity Series start at Indy, having piloted the No. 98 Ford Mustang to a 14th-place finish in 2015 while driving for Biagi-DenBeste Racing.

The clock is ticking on the summer season, and the opportunity to submit your “Hero of the Grill” for the No. 10 Ford Fusion has now closed. Smithfield’s “Hero of the Grill” contest was launched earlier this year by Almirola and five-time world-champion barbecue pitmaster Tuffy Stone. Fans had the chance to nominate their favorite grill hero by visiting SmithfieldGetGrilling.com. One “Hero of the Grill” nominee will win $5,000. Plus, up to 10,000 nominees will have the chance to see their name featured on Almirola’s No. 10 Smithfield Ford at Richmond (Va.) Raceway in September.

Indy marks the 23rd points-paying event during which the Smithfield livery has adorned Almirola’s No. 10 Ford Fusion. Smithfield, a brand of Smithfield Foods, which is based approximately five hours northeast of SHR headquarters in Smithfield, Virginia, is in its seventh season with Almirola and its first with SHR. Founded in 1936, Smithfield is a leading provider of high-quality pork products, with a vast product portfolio including smoked meats, hams, bacon, sausage, ribs, and a wide variety of fresh pork cuts.

In 25 Cup Series starts this year, Almirola has earned an average start of 18.0 and an average finish of 14.0, with one top-five finish and 10 top-10s. He’s also led 115 laps this season, already a career best. Almirola rounds out the four-driver SHR contingent at 12th in the point standings. The season’s consistency on the track allowed Almirola to clinch his playoff spot after last weekend’s race at Darlington (S.C.) Raceway.

You’ve clinched your spot in the playoff going into Indy. How does that feel?
“It feels like a relief. Coming to SHR that was my goal. I obviously want to win races, too, but the main goal was to be competitive and be consistent and, if we had both of those things, we would be able to make the playoffs. That was our ultimate goal, to make the playoffs. Now, to be able to accomplish that and still have a race to go is good. It gives us an opportunity to go into Indy with a different mindset and different attitude. We can kind of be relaxed and have a little fun.”

This is Johnny Klausmeier’s first year as a crew chief and he’s in the playoffs. What does that say about the No. 10 team as whole, and is it a cool feeling to accomplish this goal, given your history?
“I think Johnny has done a tremendous job getting his feet under him as a crew chief, and getting the team rallied around him and bringing fast cars to the track every weekend. I know a large part of that is obviously the SHR organization as a whole. Everybody at Stewart-Haas Racing has a done great job with all four teams. Right now, we are the only team in the garage that has all of its cars in the playoffs. That’s a big statement and I think that speaks volumes about the organization. For what Johnny and myself have been able to accomplish being new working together – Johnny in his first year as a crew chief – he’s adapted really quickly and he’s really good. And that’s what has me so excited about not only going into the playoffs together, but about our future working together. He’s young and new, and I’m young and our whole team is young, and we’re built to grow and I feel like we’ve had a lot of good results already. I don’t even feel like we’re close to our max potential. I think there’s so much room for us to grow and get better and, if we’ve already achieved these results so early, I think the potential is there to be great.”

How is your playoff approach different this time than when you first made it in 2014?
“It’s definitely different this time. Last time we were in the playoffs, I think we were 20th in points and we won Daytona in July, which got us in. We weren’t a weekly threat, or a contender on a regular basis. So going into it was kind of like, ‘Well, the worst that we can do is finish last.’ We went in with really no pressure at all and to just have fun. We actually ran pretty well and we managed to raise the level of execution and speed in the cars. Making the playoffs brings out the best in everybody. This year I think is different because it seems like every single track we go to we can be a threat to win, we can be a threat to run in the top-five. I feel like, going into the playoffs, it really is about digging deep and getting the most out of everything, getting the most out of the cars, getting the most out of every practice and every lap on the track, every qualifying round, getting the most out of the guys on pit road and getting the most out of the racecar that I can. I think there is more pressure now going into the playoffs with this team than what I had in 2014 because we can go win races. We’ve shown we have the speed and capability to run up front. If I do my part and the team does its part, there should be no reason we can’t transfer through some of these rounds and potentially put ourselves in the position to race for the championship.”

All four SHR cars have secured playoff spots and there’s a good chance SHR will be the only four-car operation this season to have done that. What does that say about SHR?

“I think it speaks volumes about how great of an organization this place is. It’s a tall task to get into the playoffs on its own. I’m speaking from experience with being in the Cup Series seven years and this only being my second appearance. It’s challenging. It’s not easy, it’s challenging. When you look at the teams that miss the playoffs, you know it’s hard. You look at the No. 48 and they’re having an off year. We’re going into the last race of the regular season and they haven’t clinched, yet. It looks like they’ll probably be OK, but crazier stuff has happened. The ability of everyone at the shop to show up and put their best effort into the cars is amazing. It certainly makes our job difficult if we show up to the track searching for speed. All of the mechanics, engineers, and the aero department, the chassis and fab shops, the people at Roush Yates engines, put in an incredible amount of effort. There are so many people who put their heart and soul into building fast racecars. Then, Johnny and I get to go out and reap the benefits. It’s a team sport and I think SHR having all four cars in the playoffs certainly shows how we work as one big team.”

With Almirola’s performance last weekend at Darlington (S.C.) Raceway, the No. 10 team has secured a 2018 playoff spot.

The Stewart-Haas Racing (SHR) team is currently the only four-car organization with all four entries locked into the NASCAR Cup Series Playoffs.

The 34-year-old also has one start in the Xfinity Series at Indy. In 2015, he started eighth and ended the day 14th.

Ford has 12 wins this season with 10 of the victories coming from the SHR camp – Harvick with seven, Clint Bowyer with two and Kurt Busch with one. Harvick also captured the $1 million grand prize with a victory at the non-points-paying All-Star Race at Charlotte (N.C.) Motor Speedway.

Johnny Klausmeier is in his first full-time season as a Cup Series crew chief. The native of Perry Hall, Maryland transitioned from an engineer to Almirola’s crew chief for the 2018 season. Klausmeier has one win as a substitute crew chief while filling in for Tony Gibson at Pocono (Pa.) Raceway in June 2016. As a race engineer at SHR, Klausmeier has worked with drivers Ryan Newman, Danica Patrick and, most recently, Kurt Busch.