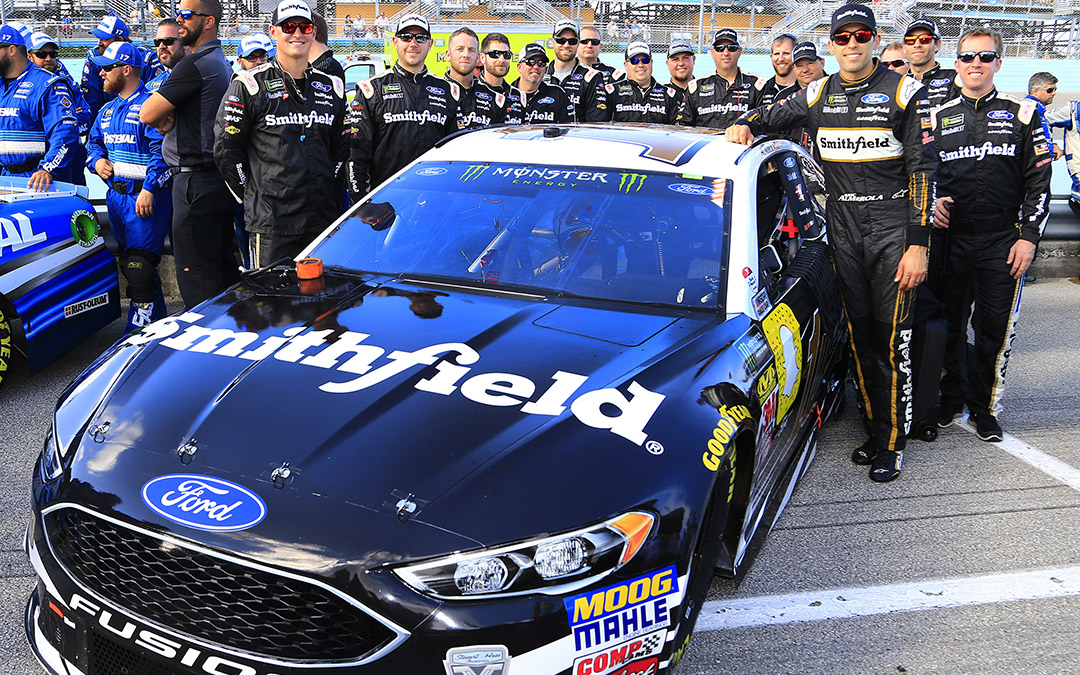 Stage 1 Recap (Laps 1-80):
● Aric Almirola started Stage 1 in the 10th spot and finished it in seventh to earn four bonus points.
● The Smithfield driver worked his way up to seventh before he made a scheduled green-flag pit stop on lap 37 for fuel, four tires and adjustments.
● The entirety of the stage was run under the green flag, but Almirola was able to reach the sixth position on lap 54 even though he reported his Ford Fusion “was not much better on entry and exit.”
● The Tampa native pitted during the stage break for fuel, four tires and adjustments to help the Smithfield machine and restarted Stage 2 in seventh.

Stage 2 Recap (Laps 81-160):
● Almirola started Stage 2 in seventh and ended it in fifth to capture six bonus points.
● He reached the fifth spot on lap 92.
● The 34-year-old made his second scheduled green-flag stop of the day on lap 119 for fuel and four tires. After pit stops cycled through, he remained in the fifth position.
● The first caution of the race was displayed on lap 139, and Almirola reported he needed “a little bit of turn without missing lateral.”
● He pitted on lap 140 from fifth for fuel, four tires and adjustments and restarted in sixth on lap 144.
● The remainder of the stage was run under green, and Almirola completed it in fifth.
● During the Stage 2 break, Almirola visited pit road for fuel, four tires and adjustments to help with his lateral grip. He started the final stage in sixth.

Final Stage Recap (Laps 161-267):
● Almirola started the final stage sixth and ended it in the ninth position.
● Almirola had raced up to fifth when the caution came out on lap 194. He pitted for fuel, four tires and adjustments and restarted fifth on lap 199.
● Almirola made a scheduled green-flag pit stop from sixth on lap 230 for fuel, four tires and adjustments.
● During the last caution period of the race on lap 248, Almirola brought the No. 10 machine down pit road for the final pit stop of the season. He came in ninth and restarted ninth on lap 253.
● Almirola remained in the top-10 for the closing laps and ultimately closed out the season with a ninth-place finish at Homestead.

Aric Almirola, Driver of the No. 10 Smithfield Ford Fusion for Stewart-Haas Racing:

“It was a great year for us, our first year working together. That was quite an accomplishment for us to battle the way we battled and to come out of here with a top-five in points. I’m just really proud of everybody on this Smithfield team. Ford had an amazing year. We won 19 races, so just an incredible year, and I’m really excited about getting ready for 2019. We had a great season, so it was nice to cap it off with a good run here at Homestead. We had a really good long-run car. That short run there at the end kind of hurt us a little bit, but I’m just really proud of (crew chief) Johnny Klausmeier, everybody at Stewart-Haas Racing and this entire 10 team. We accomplished a lot in one year, and I’m just really proud of that. I feel like we have so much potential, and we just continue to grow and get better and better, and next year is going be a lot of fun.”

The 2019 season kicks off with the traditional Speedweeks at Daytona (Fla.) International Speedway. The 61st Daytona 500, the first points-paying race of the year, is Feb. 17 and will be broadcast live on FOX.