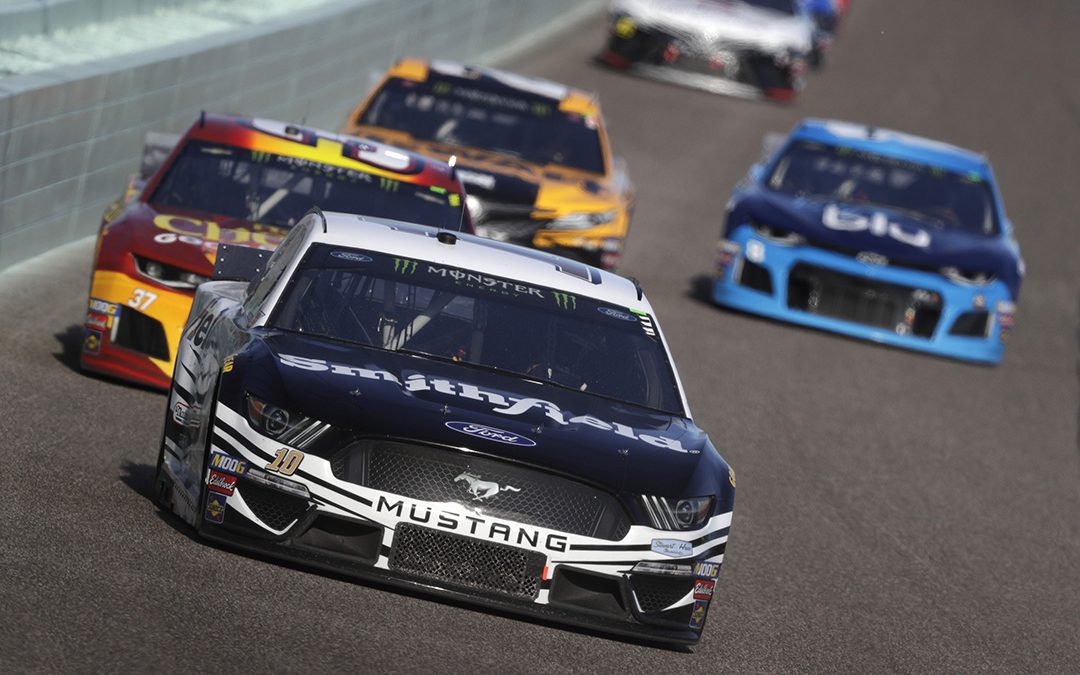 Stage 1 Recap (Laps 1-80):
● Aric Almirola started 14th and finished 16th.
● The No. 10 Smithfield Ford driver pitted on lap 37 for four tires, fuel and chassis adjustments to correct tight-handling conditions.
● He returned to the track in 17th and raced his way to 14th by lap 65.
● Almirola was passed by leader Martin Truex Jr. on lap 69, putting him a lap down.
● He battled the No. 8 car for the Lucky Dog position but just fell short.
● At the conclusion of the stage he pitted for four more fresh tires, fuel and adjustments.

Stage 2 Recap (Laps 81-160):
● Almirola started 15th and finished 22nd.
● In the opening laps of Stage 2, Almirola was caught behind the No. 6 car as it pitted unexpectedly.
● He fell outside the top-20 and radioed that his No. 10 Ford was a “9 out of 10 on the tight side.”
● The caution was called on lap 136 with Almirola scored in 21st. He did not pit during the caution in the hope of being in the Lucky Dog position.
● At the end of the stage, Almirola said the No. 10 Smithfield Ford started the run with decent balance but would not turn as the run went on.
● He pitted at the conclusion of the stage for four tires, fuel and adjustments.

Final Stage Recap (Laps 161-267):
● Almirola started 22nd and finished 22nd.
● The No. 10 driver earned the free pass to rejoin the lead lap.
● He continued to note tight-handling conditions during the final stage.
● Almirola raced to 18th place before pitting on lap 215 for four fresh tires, fuel and chassis and air pressure adjustments.
● While on pit road, Almirola’s car slid past his marks and made contact with his tire carrier, sending the tire rolling across pit road. Due to this incident, the No. 10 team was handed an uncontrolled tire penalty, and Almirola was put another lap down.
● He finished the race three laps down after being passed by leader Kyle Busch in the closing laps.

Notes:
● Busch won the Ford EcoBoost 400 to secure his second career Monster Energy NASCAR Cup Series championship, the 56th race win of his career, his fifth of the season and his second at Homestead. His margin of victory over second-place Martin Truex Jr. was 4.578 seconds.
● There were three caution periods for a total of 15 laps.
● Only 10 of the 40 drivers in the Ford EcoBoost 400 finished on the lead lap.

Next Up:
The 2020 season kicks off with the traditional Speedweeks at Daytona (Fla.) International Speedway. The 62nd Daytona 500, the first points-paying race of the year, will go green on Sunday, Feb. 16, 2020, with live coverage from Fox and SiriusXM NASCAR Radio.