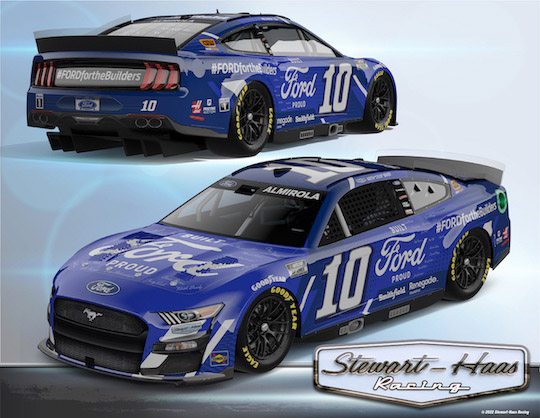 Notes of Interest
● After 14 races this season, Almirola is the only driver in the NASCAR Cup Series without a DNF (Did Not Finish). He has completed 3,990 of the 3,995 laps run this year – a 99.9 percent completion rate.

● This weekend marks the inaugural NASCAR Cup Series race at Gateway International Raceway in Madison, Illinois, across the Mississippi River from downtown St. Louis. While Cup series racing at Gateway will be new to Almirola, his three NASCAR Camping World Truck Series starts there give him plenty of confidence heading to the 1.25-mile oval. In the 2006 Truck Series race, Almirola started 22nd and finished 10th, in 2009 he started 15th and earned a solid fourth-place finish, and in 2010 he started 16th before leading 16 laps and finishing eighth.

● Almirola is no stranger to performing well at inaugural Cup Series events. Last year, the Cup Series for the first time visited Nashville Superspeedway, a 1.33-mile oval similar in size to Gateway. After a string of bad luck leading into that weekend, Almirola and the No. 10 Ford team earned the pole, led a lap and finished fourth.

● #FordfortheBuilders: Calling all builders! This weekend, Ford will adorn the No. 10 Mustang at Gateway with a special campaign and paint scheme that celebrates builders as part of its “Built Ford Proud” program. Ford wants to celebrate not only those who build Ford vehicles, but also those who put in the hard work and take pride in building something special. With 182,000 employees globally, Ford believes that hard work is what builds the future. Their names may not be known, but these builders wake up every day working together to move everyone forward. This weekend at Gateway, their names will be made known. Included on Almirola’s car design will be the names of the builders of the No. 10 Ford Mustang and the names of builders at the Ford assembly and stamping plants located in Chicago. Above the driver-side window, Stewart-Haas Racing will highlight a special “Builder of the Week” named Keith Brady. Brady, who has worked in the industry for more than 30 years, is the lead car shop technician for the No. 10 team and has played a key role in the transition and assembly of the NextGen racecar. Opposite Brady’s name above the passenger-side window will be another Ford “Builder of the Week,” Phil Pryor. Pryor is a predelivery team member at Ford’s Chicago assembly plant and has been a proud Ford builder for 57 years.

● Points: Almirola arrives at Gateway 14th in the driver standings with 342 points, 147 out of first.

Aric Almirola, Driver of the No. 10 Built Ford Proud Mustang for Stewart-Haas Racing:

What are your thoughts heading to the inaugural Cup Series race at St. Louis?
“It’s been a long time since I’ve been there in a truck. Since then the track has been repaved and has had a lot of upgrades, so it’s going to be new to me, but also new to everyone. Getting 50 minutes of practice will be helpful. I’m looking forward to it. We went to Nashville in the Cup cars last year for the first time and we qualified on the pole and ran in the top-five all day. I hope to do something very similar for our first time at Gateway. We’ve had to adapt to new scenarios all year and I know this 10 team can do it.”

Why is it so important to celebrate Ford builders?
“Ford is known for its hard-working builders and so is our race team. Any time we get to celebrate the men and women behind the scenes who build our future and make our racecars faster is great. I’ve never been a fan of promoting myself, so being able to shine a light on the people at Ford and Stewart-Haas Racing who make us better each and every day means a lot. We wouldn’t be where we are today if not for their hard work and passion for growth.”