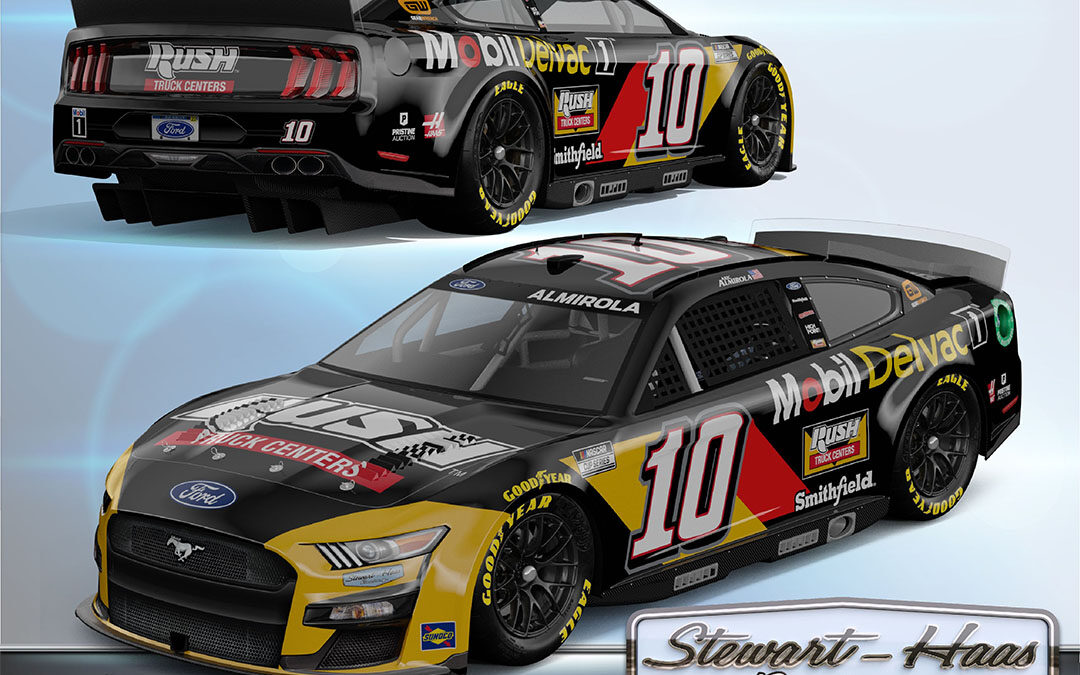 ● Almirola finished fifth at the season-opening Daytona 500 last weekend. It was his second top-five finish at the iconic race.

● One More Time: On Jan. 10, Aric Almirola released a video on his YouTube channel announcing his retirement from fulltime NASCAR Cup Series racing after the 2022 season to spend more time with his family. This year marks Almirola’s 11th fulltime Cup Series season. The official press release can be viewed here.

● History at Auto Club Speedway: In 13 cup series starts at Fontana, Almirola has two top-10 finishes and seven laps led, which came in his last two starts there in 2019 and 2020.

● After the season-opener at Daytona, Almirola ranks 12th in the driver standings with 32 points.

● Drew Blickensderfer joined the team as the new crew chief for the No. 10 Smithfield Ford Mustang for 2022. He replaced Mike Bugarewicz, who was promoted to SHR performance director. Blickensderfer comes from Front Row Motorsports, where he led Michael McDowell to his first Daytona 500 win last season. Blickensderfer and Almirola were together in 2017 and 2018 at Richard Petty Motorsports.

● Rush Truck Centers returns as a team partner of Stewart-Haas Racing with its first appearance on the No. 10 Ford this weekend at Auto Club Speedway and, later this season, serve as a primary sponsor of the No. 14 of Chase Briscoe. All of the SHR cars travel from race to race in haulers from Rush Truck Centers, the premier service solutions provider to the commercial vehicle industry. And those haulers are supported by the RushCare team of parts and service experts, who also provide concierge level service and maintenance, technical support, schedule mobile service, dispatche roadside assistance, help locate the nearest dealer and more. Rush Truck Centers is the largest network of commercial vehicle dealerships in the United States with 139 locations, and takes pride in its integrated approach to customer needs – from vehicle sales to aftermarket parts, service and body shop operations, plus financing, insurance, leasing and rental, as well as alternate fuel systems and other vehicle technologies.

● Rush Truck Centers is also a leader in all-makes parts for the commercial vehicle industry, and will soon be issuing its third All-Makes Parts Catalog. The catalog features 16,000 parts from more than 125 manufacturers, the most common parts needed for commercial vehicles. No matter what brand of truck you drive, you’ll find what you need in this catalog. It also is filled with product and technical tips to help keep our customers up and running. Contact your local Rush Truck Centers location to pre-order a copy.

● Beyond the 10 YouTube Series: In 2022, Almirola is sharing his life beyond the No. 10 Smithfield Ford with season three of his award-winning YouTube series. Fans and media can subscribe on YouTube to see Almirola’s personality on and off the track. Episodes have already featured life as a dad, a husband and an athlete, and it gives fans a unique perspective on what goes on in the life of a professional NASCAR driver. Fans can also follow Almirola’s social media channels: @Aric_Almirola on Twitter and Instagram, and @AricAlmirola on Facebook.

What is your ultimate goal this season and how will you achieve it?
“A multi-win season to set us up for a championship run is the ultimate goal for me this season. The only way to do that is to have every facet of our team perfect. You have to be perfect at this level. I have to do my part, the crew has to do their part, the men and women at the shop have to do their part. Everything has to come together, but we have the hardest-working people around and I know the effort will be there this season to make it happen.”

You had a shot at victory lane in your final Daytona 500 as a fulltime driver. How did you feel about the closing laps, and are you proud of the effort?
“We were coming there to the end and I thought for sure like, ‘Man, this is setting up nicely to have that kind of storybook ending.’ I believed it. I really did. I believed it in my heart that it was going to happen and I still felt like I was in a really good position off of turn two on the white flag. I’m like, ‘Man, if they let us race back and there’s no crash, we’ve got a shot to win this thing.’ We came out fifth, but it was still fun. I’m proud of our team. It’s cool to get Ford in victory lane. We swept the week, so I’m proud of everybody, and now we go to California.”

Did you learn anything about the car this weekend that you can take to Fontana?
“I think the biggest thing is just knowing what the car feels like on edge and when we’re aggressive like we were at Daytona. But when we get to Fontana, it’s a complete reset. We have to relearn everything on a completely different style of racetrack. Look what we did at Daytona with no test session, though. We had two cars in the top-five. Our team did an incredible job dialing the cars in over the course of the week and got them where they needed to be to compete for the win. Some weekends we’ll have it close and some we won’t, but this team is capable of adapting quickly and we proved that at Daytona.”