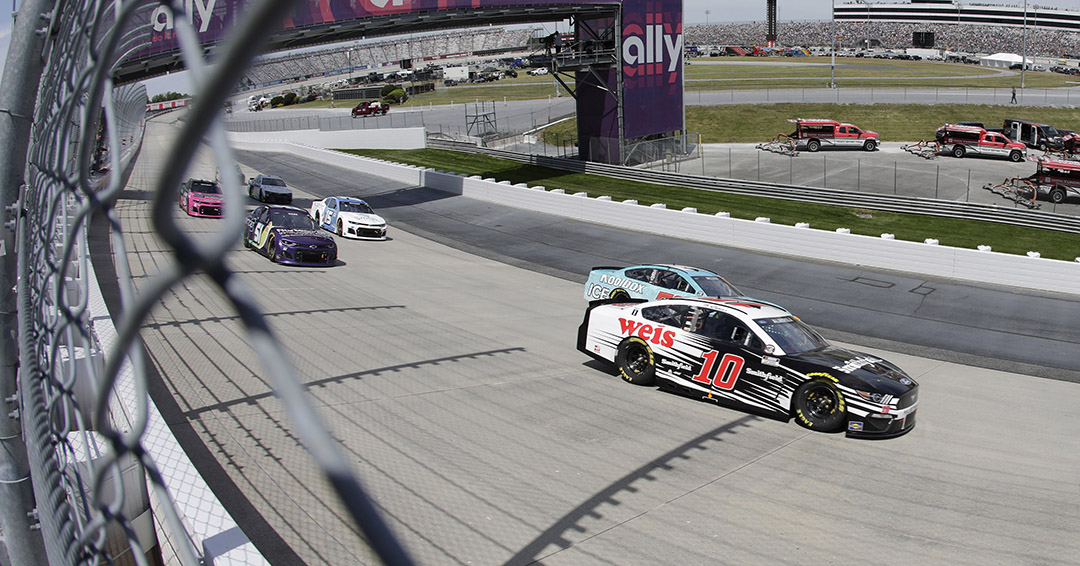 Stage 1 Recap (Laps 1-120):
● Aric Almirola started 32nd and finished 19th.
● The Smithfield/Weis driver raced to 24th before the lap-35 competition caution.
● He pitted for four fresh tires, fuel, and chassis and air pressure adjustments to combat loose-handling conditions.
● Almirola was passed by the leader to go one lap down with 10 laps to go.
● On the last lap of the stage, Almirola passed teammate Chase Briscoe after he contacted the wall and earned the “lucky dog” position to rejoin the lead lap in Stage 2.
● He pitted at the end of the stage for four tires, fuel and adjustments.

Stage 2 Recap (Laps 121-240):
● Almirola started 19th and finished 12th.
● Almirola raced to 17th before a caution on lap 170. The team pitted for four fresh tires, fuel and air pressure adjustments.
● The Smithfield/Weis Ford driver powered his way to 11th on the restart and made the top-10 by 182.
● He held the top-10 position until handling issues demoted him two spots back before the end of the stage.
● Almirola pitted at the end of the stage for four tires, fuel and more adjustments.

Final Stage Recap (Laps 241-400):
● Almirola started 14th and finished 37th.
● Almirola continued to battle handling issues while holding the car inside the top-13.
● On lap 302, Almirola cut a tire and made hard contact with the outside wall, damaging the car beyond repair.

Notes:
● Alex Bowman won the Dover 400 to score his fourth career NASCAR Cup Series victory, his second of the season and his first at Dover. His margin over second-place Kyle Larson was 2.017 seconds.
● There were seven caution periods for a total of 41 laps.
● Only 17 of the 37 drivers in the Dover 400 finished on the lead lap.
● Denny Hamlin remains the championship leader after Dover with a 101-point advantage over second-place William Byron.

Aric Almirola, driver of the No. 10 Smithfield/Weis Ford Mustang for Stewart-Haas Racing:
“That was another hard hit. My body is hurting. It doesn’t want to take any more hard hits like that. It’s just such a trying year. I don’t know what exactly happened. I think something in the suspension broke. It wasn’t like a right-front went down. It wasn’t like all of a sudden. A couple laps before that I felt like I was laying on the splitter pretty hard, which is unusual that far into a run, and I kind of mentioned it on the radio and then went down into turn three, the worst possible place – well, there’s no good place at Dover to have a suspension failure or a tire go down – but our guys deserve so much better. Our partners, Smithfield, Ford, everybody, Go Bowling, Pit Boss Grills, everybody that helps us deserves so much better. We’re so much more capable, but God is really testing us this year.”

Next Up:
The next event on the NASCAR Cup Series schedule is the EchoPark Texas Grand Prix on Sunday, May 23 at Circuit of the Americas (COTA) in Austin, Texas. The race begins at 2:30 p.m. EDT with live coverage provided by FS1 and SiriusXM NASCAR Radio.