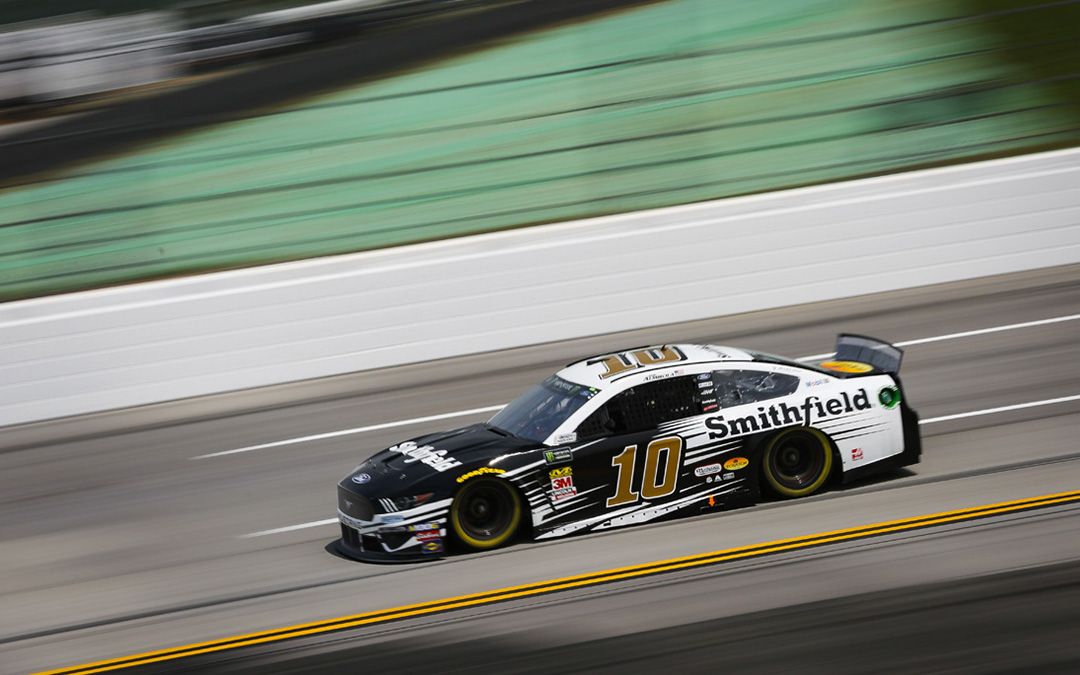 KANNAPOLIS, North Carolina (April 29, 2019) – Aric Almirola’s 2019 Monster Energy NASCAR Cup Series season has been a rollercoaster, starting with six consecutive top-10 finishes, then getting knocked out by a lap-two accident not of his doing at Bristol (Tenn.) Motor Speedway, then pit stop and lug nut issues that plagued the Smithfield Ford team at Richmond (Va.) Raceway. But, after surviving last Sunday’s race at Talladega (Ala.) Superspeedway to bring home another top-10, Almirola looks forward to racing at a track less than half Talladega’s size knowing that his team brought a dominant car there last fall.

Almirola and the No. 10 Smithfield Mustang team for Stewart-Haas Racing (SHR) started last fall’s Dover race 11th and gradually made their way to the lead by the final stage. Almirola led a total of 64 laps, but made contact with the wall racing aggressively in the closing laps, ultimately finishing 13th. It was the first time the 35-year-old led a lap at the concrete mile oval in the NASCAR Cup Series and, although the finish wasn’t what he wanted, he completed one of his best races at a track one mile in length or shorter, leaving him with confidence heading into this Sunday’s Gander RV 400.

“I love going to Dover because it’s one of those place you go 170 mph but you feel like you’re going 300 mph,” Almirola said. “We found speed there last year and, coming off a top-10 after a string of bad races, I’m really looking forward to getting back there knowing we can compete for a win.”

While Dover looks and feels fast to Almirola, the new rules package with increased horsepower could make the high-banked oval even faster and more challenging.

“Dover is one of the places I think that we will really, really notice the minimum speed being much faster than what we had with last year’s rule package,” he said. “The straightaway speed I don’t think will be much different but, because of all the downforce on the cars that we have now with this rules package, I think the minimum speed and the mid-corner speed will be so high. It is going to be incredibly fast. I personally think it will be similar to what I used to experience when I would go there and truck race, where qualifying is crazy and you are pretty close to wide open, and then in the race there is just not a lot of off-throttle time. It makes it exciting to run and make laps around there by yourself, but it presents challenges to race.”

In his 13 starts at Dover, Almirola has earned three top-10 finishes, two top-fives and has led a total of 64 laps. His average finish is 11.7 with an average start of 13.2 in 18 total Cup Series races.

Almirola has four NASCAR Xfinity Series starts at Dover and finished inside the top-15 each time. He has two starts in the NASCAR Gander Outdoors Truck Series at Dover, capturing his second NASCAR national series win by driving into victory lane there in May 2010. His only other Dover start in the Truck Series resulted in a 12th-place finish.

Dover marks the eighth weekend the iconic black and white Smithfield livery has adorned Almirola’s No. 10 Ford Mustang. Smithfield, a brand of Smithfield Foods, which is based approximately five hours northeast of SHR headquarters in Smithfield, Virginia, is in its eighth season with Almirola and its second with SHR. Founded in 1936, Smithfield is a leading provider of high-quality pork products, with a vast product portfolio including smoked meats, hams, bacon, sausage, ribs, and a wide variety of fresh pork cuts.

Almirola sits 11th in the driver standings, tied with teammate Clint Bowyer with 288 points, 142 out of first.

Will the increased horsepower at Dover make it difficult to manage tires?
“I don’t know. I think it could be an issue – there is certainly the potential for that. You are going to be going faster across the middle of the corner and will have more load on the tires because of the downforce and the speed being higher. I think there is potential for that, but I believe Goodyear did a tire test there earlier this year and they had wheel force transducer cars on the track there collecting data. I think that there is potential if they are not prepared for it.”

How do you stay motivated as a driver?
“It’s all self-driven. I’ll go and rewatch the old race footage of the racetrack that we’re going to. I’ll look at my driver data and compare it to my teammates. I write notes every single weekend, throughout the weekend. I’ll log it into my laptop and, after the race is over, I’ll go in and write a race report about how the race went, what happened in the race, how I thought the track changed, how the line changed and my driving style changed to adapt to the changing track conditions. I go in and write very detailed reports after practices and the race, and then I’ll study that leading into the next event at the track.”

● Aric Almirola will make his 291st career Monster Energy NASCAR Cup Series start Sunday at Dover (Del.) International Speedway.
● In his 13 starts at Dover he has earned three top-10 finishes, two top-fives and has led a total of 64 laps. His average finish is 11.7 with an average start of 13.2 in 18 total Cup Series races.
● Almirola has four NASCAR Xfinity Series starts at Dover and finished inside the top-15 each time. He has two starts in the NASCAR Gander Outdoors Truck Series at Dover, capturing his second NASCAR national series win by driving into victory lane there in May 2010. His only other Dover start in the Truck Series resulted in a 12th-place finish.
● Career: Almirola has career totals of two wins, two poles, 16 top-five finishes, 56 top-10s and 456 laps led in 289 starts.
● 2019: Almirola has earned one pole, one top-five finish, seven top-10s and has led 99 laps in 10 races this season.
● Last win: Almirola’s Oct. 14, 2018 win at Talladega was his most recent in the Cup Series.
● Point standings: Almirola is 11th in the Cup Series standings with 288 points, 142 out of first place.
● Crew chief Johnny Klausmeier is in his second full-time season as a Cup Series crew chief. The Perry Hall, Maryland, native transitioned from an engineer to Almirola’s crew chief for the 2018 season. Klausmeier has one win as a substitute crew chief while filling in for Tony Gibson at Pocono (Pa.) Raceway in June 2016, and one win as a crew chief for Almirola last fall at Talladega. As a race engineer at SHR, Klausmeier worked with drivers Ryan Newman, Danica Patrick and Kurt Busch.
● Smithfield rejoined SHR this season and will be the primary partner for the majority of the season on the No. 10 Ford Mustang piloted by Almirola. Founded in 1936, Smithfield is a leading provider of high-quality pork products, with a vast product portfolio including smoked meats, hams, bacon, sausage, ribs, and a wide variety of fresh pork cuts.