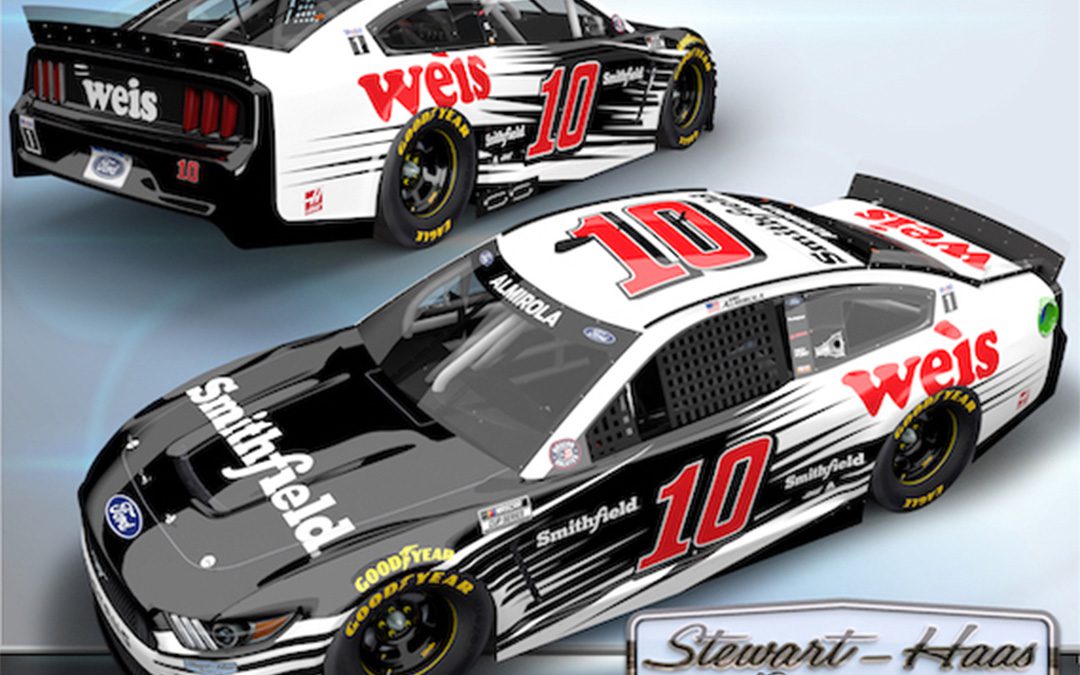 ● Weis Markets will join the No. 10 livery for the first time on the rear-quarter panels, decklid, and an accented red No. 10. To learn more about Weis Markets click here. On April 22, Almirola unveiled his No.
10 Smithfield/Weis Ford Mustang via stream in conjunction with a Weis Market grand opening in Gap, Pennsylvania.

● The Smithfield Ford team sits 28th in the championship standings with 168 points, 361 behind leader Denny Hamlin.

Aric Almirola, Driver of the No. 10 Smithfield/Weis Ford Mustang for Stewart-Haas Racing

What is your mindset heading to Dover – another event for the 750-horsepower package?
“We had a shot to win there in 2018 and we know we’re capable of running up front. I really enjoy Dover. I would say it’s one of, if not my favorite, tracks on the circuit. We’ll be starting toward the back this weekend without qualifying, so we’ll have to grind again to make our way to the front and hope we don’t get caught up in anything early. Our 750-horsepower packages are really good this year and we’ve been able to bring fast cars to the 750-package tracks. When we finally had a clean race with no bad luck at Richmond, we finished sixth. We had a fast car at Phoenix, too, and rallied back from a speeding penalty to finish 11th. I’m optimistic for this weekend and excited to get out there and get us back on track.”

With no practice or qualifying, talk about how difficult this makes it on teams.
“In years past when we could go practice and qualify and do all of those things, if you had a bad weekend, as soon as that weekend was over, you debrief about it Monday (and) Tuesday. Then your focus is next week, going forward, and you literally forget about last week. If you unload and your car’s fast and you qualify in the top-five, then you’ve got a great starting spot for next week’s race. Last year, being on the opposite end and being up in the points and finishing good most times – even when we didn’t finish good, we were still up so high in points that we would still start in the top-15. It certainly makes a lot of difference. Things are a lot easier going into that next weekend. And the situation we are in right now makes it a lot harder to claw out of it.”

What happened at Darlington?
“Another day mired by bad luck. We had such a fast Smithfield Ford Mustang and were blazing through the field in just six laps. Then we got wrecked by the No. 47 and our day was over. It was a day filled with a lot of confidence, but we’re shaking it off and are fully focused on the challenge ahead. We know we have some good notes for Darlington when we go back there in September.”