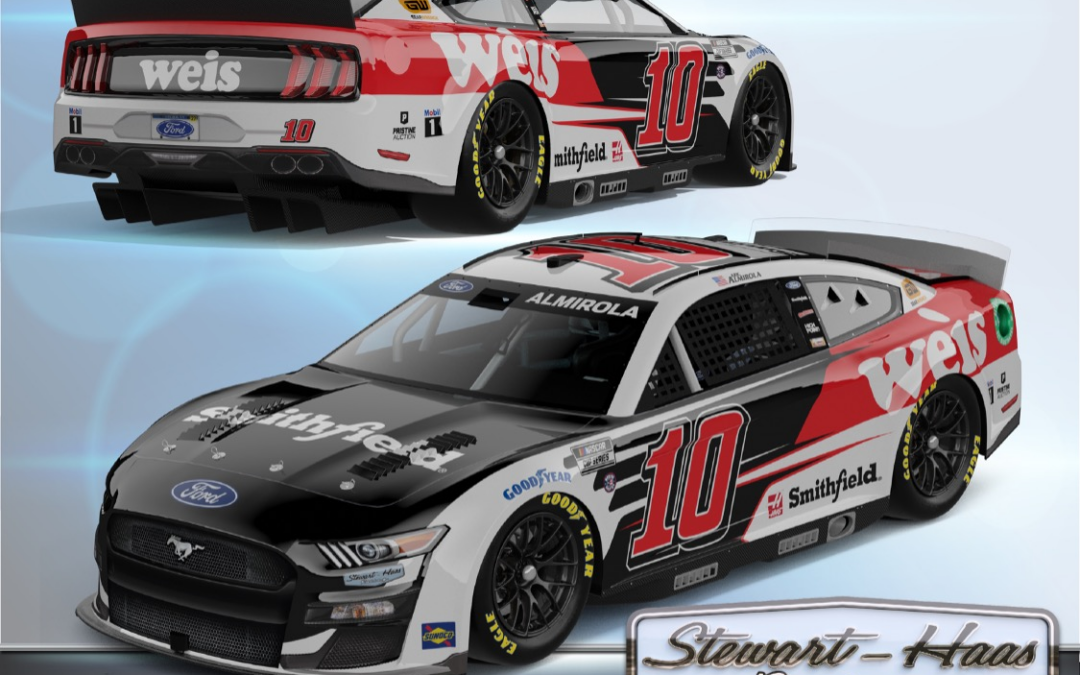 ● Although the statistics might not suggest it, Almirola and the No. 10 Smithfield Ford Mustang team have come oh so close to hoisting the trophy at Dover in the Cup Series. In the fall 2018 race there, he started 11th and gradually made his way into the lead by the final stage. He led a total of 64 laps before a late caution, but contact with the wall while racing aggressively in the closing laps ruined his victory bid and left him with a 13th-place finish. It was the first time the Tampa, Florida, native led laps on the concrete mile oval.

● Points: Almirola arrives at Dover 10th in the driver standings with 265 points, 103 out of first.

● Through their relationship with Smithfield, Mid-Atlantic food retailer Weis Markets rejoins the No. 10 Ford at Dover for the third consecutive season with co-primary branding on the upper rear quarter panels, decklid and television panel of the uniquely colored red, white and black paint scheme this weekend.

● Headquartered in Smithfield, Virginia, since 1936, Smithfield Foods, Inc., is an American food company with agricultural roots and a global reach. Its 63,000 team members are dedicated to producing “Good food. Responsibly.®” Smithfield is one of the world’s leading vertically integrated protein companies. The company has pioneered sustainability standards for more than two decades, including its industry-leading commitments to become carbon negative in U.S. company-owned operations and reduce GHG emissions 30 percent across its entire U.S. value chain by 2030. Smithfield believes in the power of protein to end food insecurity and has donated hundreds of millions of food servings to local communities. Smithfield boasts a portfolio of high-quality iconic brands, such as Smithfield®, Eckrich® and Nathan’s Famous®, among many others. For more information, visit www.SmithfieldFoods.com, and connect on Facebook, Twitter, LinkedIn and Instagram.

Aric Almirola, Driver of the No. 10 Smithfield/Weis Ford Mustang for Stewart-Haas Racing:

This is your last fulltime NASCAR Cup Series start at Dover. What are your feelings going into the weekend?
“I get asked what my favorite track is all the time during media days and meet-and-greets. My answer is always Dover and it shocks people. They would think Talladega or Daytona because I have had success there, but Dover is just a place I always love to race at. I got my first Truck Series win there and I always feel confident when we race there. It’s going to be bittersweet, but what will make it even sweeter is getting to victory lane again.”

What do you like about Dover?
“I love going to Dover because it’s one of those places you go 170 mph but you feel like you’re going 300 mph. The sensation of speed you get is unbelievable. We had a shot to win that race in 2018 and we led a lot of laps. Every time I go back there, I think about how we have the capabilities to run up front and win, which is the mindset we want every weekend.”