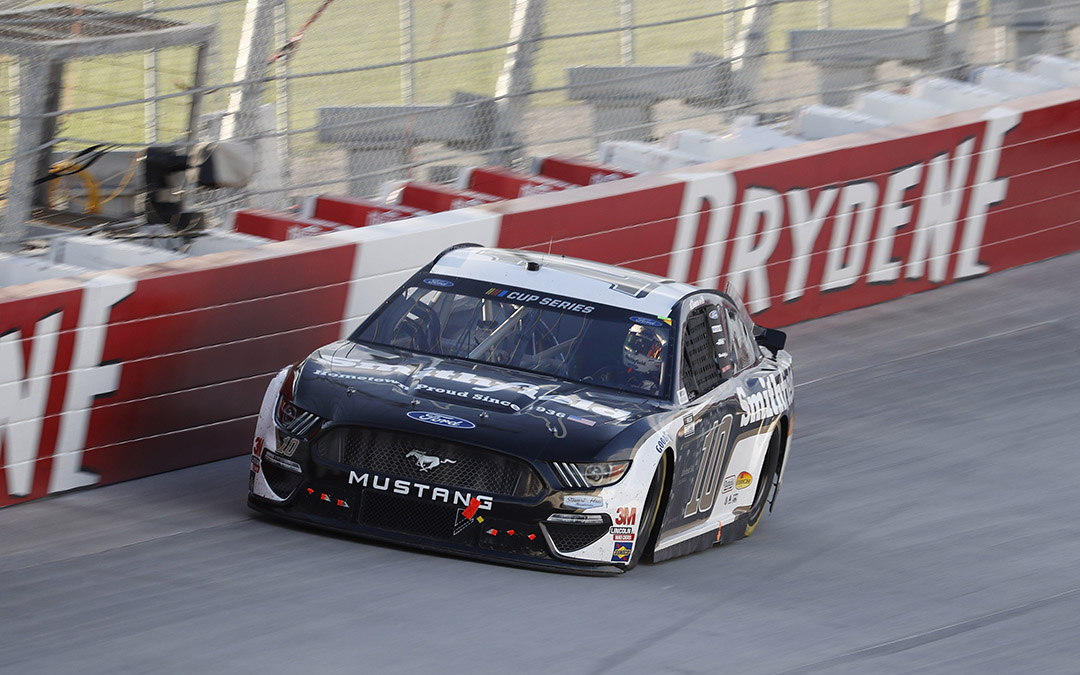 Stage 1 Recap (Laps 1-70):
● Aric Almirola started fourth and finished fourth to earn seven bonus points.
● Almirola took the lead on lap 12 and held the lead for 22 laps before noting loose-handling conditions.
● He fell back to seventh and raced up to fourth before the stage ended.
● The No. 10 driver pitted at the end of the stage for four tires, fuel and adjustments.

Stage 2 Recap (Laps 71-185):
● Almirola started 33rd and finished 14th.
● Almirola was handed a speeding penalty on pit road and was forced to the rear of the field before starting Stage 2.
● He re-entered the top-15 by lap 120.
● Almirola pitted at the end of the stage for four fresh tires and fuel.

Final Stage Recap (Laps 186-311):
● Almirola started 14th and finished seventh.
● Almirola pitted for four tires and fuel on lap 217.
● The Smithfield Ford driver was scored in the sixth position by lap 267.
● Almirola pitted for four tires and fuel under caution on lap 290. He came off pit road seventh.
● He held his position before the checkered flag waved and finished just short of another top-five finish.

“Great job from everyone on bouncing back today. I need to do better, we all need to do better, and we just need to keep grinding with the playoffs coming up. We didn’t have a clean race today again and still found ourselves leading laps and running in and around the top-five. Our goal when we started the season was to make Daytona not matter before the playoffs and we accomplished that goal by clinching our spot in the playoffs today. Looking forward to heading there with no pressure and racing one last time for that regular-season win.”

Notes:
● Almirola clinched his playoff berth with an insurmountable 112-point margin over the top-16 cutoff.
● Almirola earned his 14th top-10 of the season and his fourth top-10 in 17 career NASCAR Cup Series starts at Dover.
● Almirola led once for 22 laps to increase his laps-led total at Dover to 86.
● This was Ford’s milestone 700th all-time NASCAR Cup Series victory. Ford’s first victory came on June 25, 1950 when Shirtless Jimmy Florian upset the field at Dayton (Ohio) Speedway, beating the likes of NASCAR Hall of Famers Lee Petty and Curtis Turner. Overall, there have been 85 drivers who have won at least one Cup Series race in a Ford. NASCAR Hall of Famer Ned Jarrett, who won Ford’s first series championship in 1965, is the manufacturer’s all-time leader with 43 victories.
● Kevin Harvick’s margin of victory over second-place Martin Truex Jr., was 3.525 seconds.
● There were seven caution periods for a total of 40 laps.
● Twenty-one of the 40 drivers in the race finished on the lead lap.

Next Up:
The next event on the NASCAR Cup Series schedule is the Coke Zero 400 on Saturday, Aug. 29 at Daytona (Fla.) International Speedway. It is the final race of the regular season and it starts at 7:30 p.m. EDT with live coverage provided by NBC and SiriusXM NASCAR Radio. The 10-race, 16-driver NASCAR Playoffs begins the following week with the Sept. 6 Southern 500 at Darlington (S.C.) Raceway.