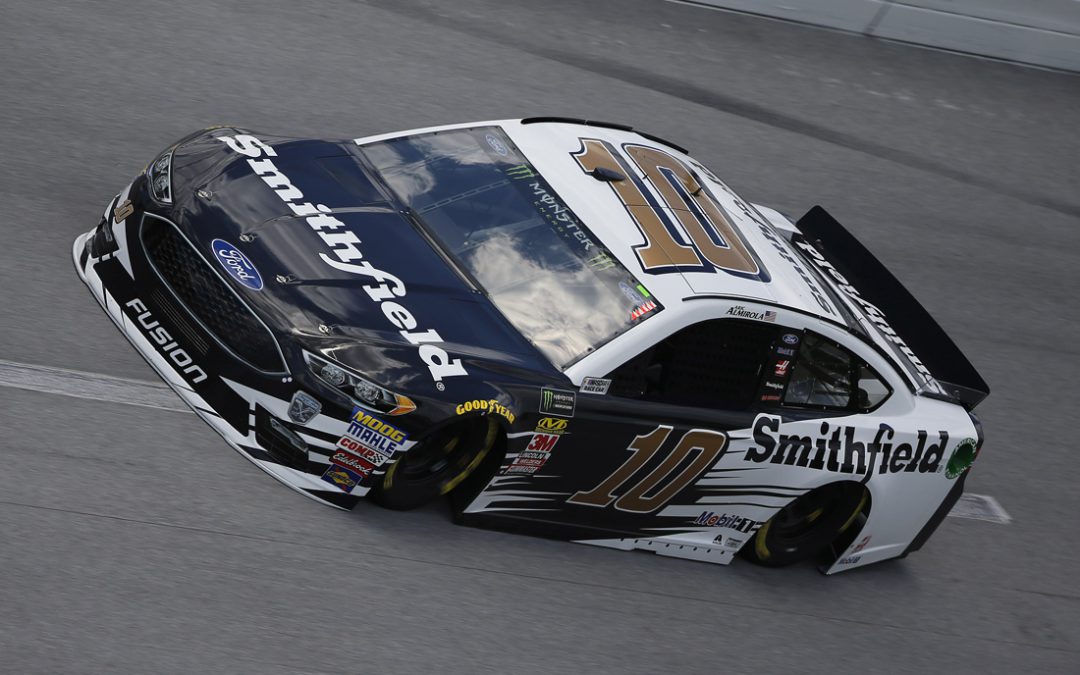 KANNAPOLIS, North Carolina (May 2, 2018) – Aric Almirola and the No. 10 Smithfield Ford Fusion team for Stewart-Haas Racing (SHR) head to Dover (Del.) International Speedway this weekend coming off of his fourth top-10 result this season. This weekend’s stop at Dover, affectionately known as the “Monster Mile,” marks the first Monster Energy NASCAR Cup Series race of the season in the northeast region of the United States.

A No. 10 Smithfield Ford Fusion will greet fans at the Monster Monument in Victory Plaza as they enter the front grounds of the Delaware track. A replica of the Almirola’s racecar was hoisted 46 feet off the ground and into Miles the Monster’s right hand April 17 as part of a media and fan event at the track.

Sunday, Almirola and team SHR co-owner Tony Stewart will gather in front of Miles to unveil a customized Ford Mustang as part of Smithfield’s Smoke Machine Mustang giveaway. Almirola and Stewart will both be made available to the media beginning at 11:15 a.m. EDT. Fans can enter for their chance to win the Mustang designed by Stewart with the help of drifting champion Vaughn Gittin Jr. They built a one-of-a-kind Ford Mustang RTR Spec 3 that will be given away to one lucky fan. Fans can begin registering Sunday for their chance to win the supped-up Mustang and a trip to November’s Ford Championship Weekend at Homestead-Miami (Fla.) Speedway by visiting SmithfieldRacing.com, or by texting SMOKE to 82257.

Dover marks the ninth weekend the Smithfield livery has adorned Almirola’s No. 10 Ford Fusion. Smithfield, a brand of Smithfield Foods, which is based approximately five hours northeast of SHR headquarters in Smithfield, Virginia, is in its seventh season with Almirola and its first with SHR. Founded in 1936, Smithfield is a leading provider of high-quality pork products, with a vast product portfolio including smoked meats, hams, bacon, sausage, ribs, and a wide variety of fresh pork cuts.

The concrete mile oval at Dover, with a horse track circling inside it, is one of Almirola’s favorite tracks on the circuit to pilot his 3,300-pound stock car around. He’s accumulated two top-five finishes and three top-10s there, and has completed 98.6 percent of all possible laps in 11 starts. SHR has two victories at Dover – Stewart in June 2013 and Kevin Harvick in October 2015 – and has amassed five top-fives and 15 top-10s in 54 starts.

Almirola, the Tampa native, has four NASCAR Xfinity Series starts at Dover and finished inside the top-15 each time. He has two starts in the Camping World Truck Series at Dover, capturing his second NASCAR national series win by driving a Truck into victory lane there in May 2010. His only other Dover start in the series resulted in a 12th-place finish.

Ford has earned 25 all-time Cup Series wins at Dover. Last weekend’s win at Talladega Superspeedway by Ford driver Joey Logano gave the blue oval a series-best five victories this season, with four of those being earned by SHR – Harvick has three wins and Clint Bowyer one.

“Really, really high banking and it’s just a fun place to go to. Dover is the one place we go where we are running 170 mph but it feels like you’re going 300 mph. The sensation of speed at Dover is incredible.”

Are you having fun this year?

“I’m having a blast. I’m having the time of my life. Every time I get on the airplane, I have a shot to win. The SHR organization from the top down is incredible. The amount of people who go every day to the shop to figure out how to make the cars go faster is amazing.”

How do you stay motivated as a driver?

“It’s all self-driven. I’ll go and rewatch the old race footage of the racetrack that we’re going to. I’ll look at my driver data and compare it to my teammates. I write notes every single weekend, throughout the weekend. I’ll log it into my laptop and, after the race is over, I’ll go in and write a race report about how the race went, what happened in the race, how I thought the track changed, how the line changed and my driving style changed to adapt to the changing track conditions. I go in and write very detailed reports after practices and the race, and then I’ll study that leading into the next event at the track.”

The Tampa native has one win in his two Truck Series starts at the Monster Mile and a 12th-place result.