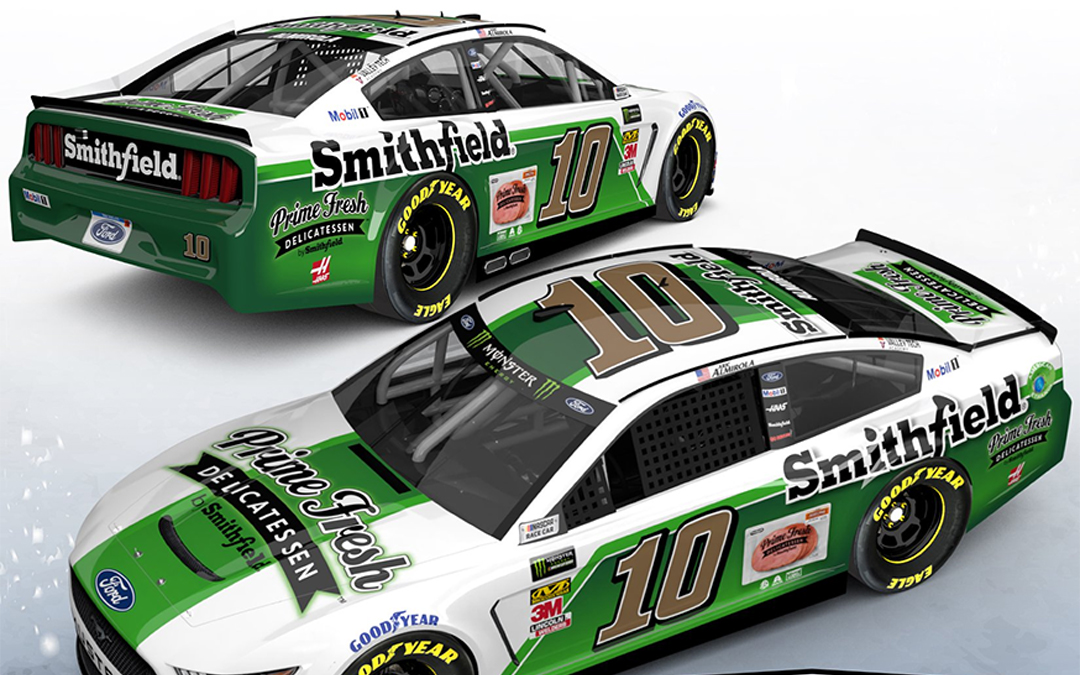 KANNAPOLIS, North Carolina (Feb. 6, 2019) – Just one year ago, Aric Almirola, driver of the No. 10 Smithfield Ford Mustang, made his debut with Stewart-Haas Racing (SHR) with an open mind and no expectations. A new crew chief, a new team and a blank canvas of opportunity. What he didn’t know was that he was about to embark on a record year – beginning with the 60th running of the Daytona 500.

On the final restart during the closing laps of the 2018 season opener at Daytona, Almirola found himself at the front of the pack. When the green flag waved, the Tampa, Florida native took the lead and, when he looked in the rearview mirror, realized he was less than a lap away from becoming a Daytona 500 champion.

“I felt so confident,” he said. “I knew that if I hit all of my gears perfectly, I would have a shot at it and I did. I looked in my mirror and saw everyone racing side by side and figured that I was in control of the race and, if I made the right move, I was going to be the winner of the Daytona 500. About halfway down the back straightaway, they were coming with a run and I pulled over to block it. In your head, you know it’s the Daytona 500 and you’re a mile and a half away from winning, so you’re going to do everything you know to try and win that race. I pulled over to block and put a pretty aggressive block on the No. 3. I knew that if I blocked high, he was going to go low. As soon as I blocked high I knew I was going to have to immediately block low. When I blocked low, he turned against my back bumper and into the outside wall. I wrecked a mile away from winning the Daytona 500. I don’t necessarily fault him for what he did but, given the same opportunity this year, you can bet your bottom dollar I would return the favor. You’re going to do whatever it takes.”

After nearly becoming Daytona 500 champions, Almirola and the No. 10 Smithfield Ford team led by rookie crew chief Johnny Klausmeier continued their success, knocking down 17 top-10 finishes, four top-fives, led 181 laps on the year and earned their first win Oct. 14 at Talladega (Ala.) Superspeedway to clinch a spot in the semifinal playoff round before finishing a career-best fifth in the championship. Almirola’s 181 laps led in the 2018 season were more than his previous six full-time Monster Energy NASCAR Cup Series seasons combined.

Almirola is no stranger to victory lane at the 2.5-mile Daytona superspeedway. His first Cup Series win there came in July 2014. He led 14 laps and captured the win in the rain-shortened race. In the July 2016 NASCAR Xfinity Series race at Daytona, he led the most important lap – the final one – at the high-banked superspeedway, then added to his restrictor-plate resume with an Xfinity Series win at Talladega May 6, 2017.

Almirola will have the opportunity to knock the high-bank-racing rust off early this season during Sunday’s 75-lap, non-points Clash. He is one of 20 drivers who are eligible for the race, which invites recent Daytona 500 pole and race winners, Clash winners, and previous playoff participants. Almirola’s best finish in his three previous Clash outings is eighth place.

“The Clash is a preseason all-star race,” he said. “It’s very much a who’s who of NASCAR in that race. It’s prestigious but, at the same time, I think it’s beneficial because you get an opportunity to get a race under our belts before our ‘Super Bowl.’ Unlike other sports, our Super Bowl comes first, so it’s great to have the opportunity to get some racing under your belt.”

The Mustang driver enters the 2019 season the same way he did last year, partnered for the eighth year with Smithfield, a brand of Smithfield Foods, which is based approximately five hours northeast of SHR headquarters in Smithfield, Virginia. Founded in 1936, Smithfield is a leading provider of high-quality pork products, with a vast product portfolio including smoked meats, hams, bacon, sausage, ribs, and a wide variety of fresh pork cuts.

With no expectations other than being stronger week in and week out, Almirola and the Smithfield Ford team look to finish that final mile on a high note to turn their “Daytona 499” of 2018 into the 2019 Daytona 500 championship.

How do you feel going into your second full-time season with Stewart-Haas Racing?
“Going into last year I really had no expectations and I don’t this year. I went into last year very open-minded, wanting to learn the system at Stewart-Haas. I wanted to learn my team and my teammates and just wanted to be a part of the team. I wanted to learn how I fit in, so as time went on and as the year progressed, I felt like all the learning started to pay off. By summertime, we showed up to the track with a better understanding of what we needed. We were faster in practice, qualifying and the race. Then we started to put ourselves in position to win races. I’ve started to take that same state of mind and attitude going into this year. We don’t need to sit down and say these are our expectations and we need to check this box and that box. The goal is to just be better. If there was a track we struggled at we just had to be better. If there were details we missed, we needed to be better. If there were things we did great, we need to identify that and make them even better. I think setting expectations can set you up for failure because you get disappointed when things don’t go your way and you get complacent when you exceed those expectations. You know, life is like a box of chocolates and you never know what you’re going to get, so it’s really just about grinding and working hard to make your weaknesses stronger and your strengths even stronger.”

How confident are you in Ford Performance and Stewart-Haas Racing’s ability to adapt to a new car and new aero package?
“If you look over the span of time, Ford has been able to win with pretty much anything. I think you can say the same for Stewart-Haas Racing. They switched to Ford two years ago and, with only a year under their belt, they developed so much success with 13 wins. That’s because of smart people and all of the people we have at Ford Performance to give us the resources we need. All of the engineers and geniuses we have here at SHR have just been able to figure it out. I don’t see where switching to the Mustang is anything but a benefit. Ford and Ford Performance have put everything into the Mustang to make sure it’s successful and it is just a badass racecar. It’s going to be really fun to see the fans watch it on the track this year.”

Are you confident in your ability to adapt to a new car and new aero package?
“One of the things that makes great racecar drivers great is the ability to adapt. It’s always going to be a little tight or a little loose and there will be times that you’re going to have the best car or you’re not. You have to make the most out of what you’re given. For me, I’ve always prided myself on that – the ability to react to the circumstances on the racecar or adapt to the car I have on that day. I’ve always viewed it as, ‘I have a steering wheel, a gas pedal, and a clutch pedal,’ and that never changes. What I do with those is ultimately how I can perform the best, so I always have to try to think about how I can do better with the racecar. That doesn’t matter if the rules change or the car is different. Whatever that may be, I’m constantly striving to be better.”

How have you been able to use the technology provided by Ford Performance to prepare you for the new season?
“It’s important. As we grow and evolve to have more technology at our fingertips, we have to be able to utilize those resources to the max potential. That has been important to us as we have limited testing and as we try to find an edge on our competition. We have to be creative and find ways to better our simulator tools. We need to be able to actually take something away from our simulators to use on the racetrack.”

● The 61st annual running of the Daytona 500 marks Aric Almirola’s 281st Monster Energy NASCAR Cup Series start. Almirola has one career Cup Series win at Daytona (Fla.) International Speedway – in the rain-shortened July 2014 event. The victory was the 34-year-old’s first Cup Series win.
● The Tampa, Florida, native has also earned two top-five finishes and two top-10s at the superspeedway and has led a total of 22 laps. In last year’s Daytona 500, Almirola raced for the lead on the final lap until he was involved in an accident with only one mile to go.
● Almirola has a career total of two wins, one pole, 15 top-fives, 49 top-10s and 357 laps led in 280 starts.
● His most recent Cup Series win came Oct. 14, 2018 at Talladega (Ala.) Superspeedway.
● 2018 stats – Almirola earned one win, four top-fives, 17 top-10s and led 181 laps during the 2018 season. Almirola’s 181 laps led are more than his previous six full-time NASCAR Cup Series seasons combined and he more than doubled his career-best top-10s in a single season.
● In addition to his two career Cup Series victories earned at Daytona July 6, 2014 and Talladega last fall, Almirola also has two NASCAR Xfinity Series wins at restrictor-plate tracks – July 1, 2016 at Daytona and May 6, 2017 at Talladega.
● The Clash – Almirola is eligible for this year’s non-points Clash at Daytona. It will be his fourth appearance in the 75-lap race with a previous best finish of sixth on Feb. 16, 2013. This non-points event features pole winners from the 2018 season, along with former Clash winners, former Daytona 500 race and pole winners who competed full-time last year, and last season’s playoff participants. The event has been run in one form or another since 1979.
● Crew chief Johnny Klausmeier is in his second full-time season as a Cup Series crew chief. The Perry Hall, Maryland, native transitioned from an engineer to Almirola’s crew chief for the 2018 season. Klausmeier has one win as a substitute crew chief while filling in for Tony Gibson at Pocono (Pa.) Raceway in June 2016, and one win as a crew chief for Almirola last fall at Talladega. As a race engineer at SHR, Klausmeier has worked with drivers Ryan Newman, Danica Patrick and Kurt Busch.
● New paint – Almirola will sport a new green-and-white Smithfield Prime Fresh Delicatessen paint scheme in the Clash at Daytona. Smithfield Prime Fresh Delicatessen offers customers the freshest, highest-quality deli meats without the wait.
● Smithfield rejoined SHR this season and will be the primary partner for the majority of the season on the No. 10 Ford Mustang piloted by Almirola. Founded in 1936, Smithfield is a leading provider of high-quality pork products, with a vast product portfolio including smoked meats, hams, bacon, sausage, ribs, and a wide variety of fresh pork cuts.
● Offseason – Almirola stayed busy this offseason with an array of special events. He participated in Chris Paul’s Celebrity Bowling Invitational, visited his hometown of Tampa, Florida to preview the new season with local media affiliates, served as the grand marshal of the Gasparilla Children’s Parade sporting his No. 10 Smithfield Ford Mustang, and swapped jerseys with defensemen Braydon Coburn of the National Hockey League’s Tampa Bay Lightning before enjoying a game with his family. He spent the rest of his time in the gym, around the shop with his team and his family in preparation for the 2019 season.