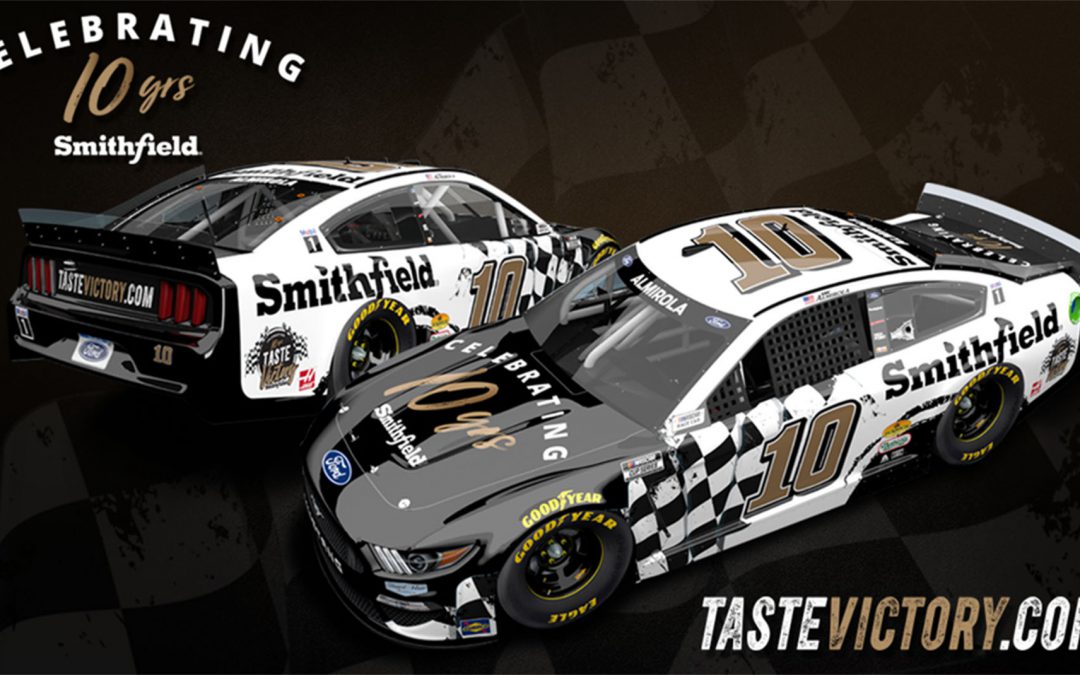 ● Last Thursday, Almirola won Bluegreen Vacations Duel No. 1 on the Daytona oval after leading a race-high 52 laps, which earned the Smithfield Ford driver 10 regular-season bonus points. Fans can view the Duel win from a behind-the-scenes perspective on the latest episode of Beyond the 10.

● Daytona 500: Almirola started third and raced inside the top-five and as high as second before an accident ended his day on lap 14. The No. 20 car approached his bumper off-center and with too much momentum, turning the No. 10 Smithfield Ford into the outside wall and causing a 16-car accident. The damage to Almirola’s car was beyond repair and ended his Daytona 500 bid.

● Almirola was one of 24 NASCAR Cup Series drivers to have already sampled the Daytona road course by virtue of his Busch Clash appearance on Feb. 9. The driver of the No. 10 Ford Mustang earned his spot in the non-points exhibition race on the 14-turn, 3.61-mile circuit by virtue of his appearance in the NASCAR playoffs last season. He started the Clash 21st and finished 12th.

● The Daytona road-course race is the first of a ground-breaking seven NASCAR Cup Series races to be held on road courses in 2021. From 1988 to 2017, there were only two road courses on the schedule – Sonoma and Watkins Glen. The Charlotte roval was added in 2018, giving the series just three road-course venues. The initial 2021 schedule doubled that tally, with Circuit of the Americas (COTA) in Austin, Texas, Road America in Elkhart Lake, Wisconsin, and the Indianapolis Motor Speedway road course all being added. And when COVID-19 restrictions forced the cancellation of this year’s stop at Auto Club Speedway in Fontana, California, it was replaced by this weekend’s race at Daytona.

● Smithfield Foods celebrates 10 years of partnership with Almirola this season with a special campaign called Taste Victory. As one of the most active partners in NASCAR, Smithfield plans to engage fans all year long by hosting a microsite that provides the opportunity to win when Almirola wins or finishes inside the top-10. When Almirola wins, one fan will win $10,000, and 10 fans will win a gift card for each top-10 finish. The microsite also doubles as an Aric Almirola fan page and entertainment source where fans can get behind the wheel of the No. 10 Smithfield Ford with a custom racing game and learn more about Almirola with fast facts, favorite recipes and custom content about his life on and off the track. Visit www.tastevictory.com to learn more. Thanks to Almirola’s win in the Duel on Feb. 11, one lucky fan has already won $10,000.

● Beyond the 10 YouTube Series: In 2021, Almirola will share his life beyond the No. 10 Smithfield Ford with season three of his award-winning YouTube series. Fans and media can subscribe on YouTube to see Almirola’s personality on and off the track. Episodes have already featured life as a dad, a husband and an athlete, and it gives fans a unique perspective on what goes on in the life of a professional NASCAR driver. Fans can also follow Almirola’s social media channels: @Aric_Almirola on Twitter and Instagram, and @AricAlmirola on Facebook.

● The Smithfield Ford team sits 23rd in the championship standings with 13 points, 45 behind leader Austin Dillon.

How have you prepared for more road courses on the schedule this season?
“Well, during the offseason we spent some time at COTA (Circuit of the Americas) getting a feel for that track. I have made it a personal goal and a priority this year to become a better road-course racer. As a racecar driver, you want to be versatile. You want to be able to contend for wins on superspeedways and intermediate tracks and short tracks – challenging tracks and road-course tracks. You don’t want to be weak in any one area. For me, it has been a big challenge to conquer road-course racing. I have put a lot of effort into this year to be a better road-course racer and had a lot of help with it. With Ford, they have helped me a lot with a lot of time in the simulator with our race team at Stewart-Haas Racing, and they’ve provided a lot of data to look at and a lot of things to study. I got my second top-10 on a road course out at Sonoma in 2019 and had a really good run and was really fast. I think we’ve come a long way and will be contending for more top-10s this year.”

Did your performance in the Busch Clash provide some insight as to what you can expect in your return to Daytona’s road course this Sunday?
“Yes. I think we learned a lot in the Busch Clash. We were able to test some setups and adjustments that we can bring to the track this Sunday. Some things we liked and some we didn’t like. It is so crucial to get a feel for the car because, when we get to the track this Sunday, we’ll start the race cold without practice or qualifying.”