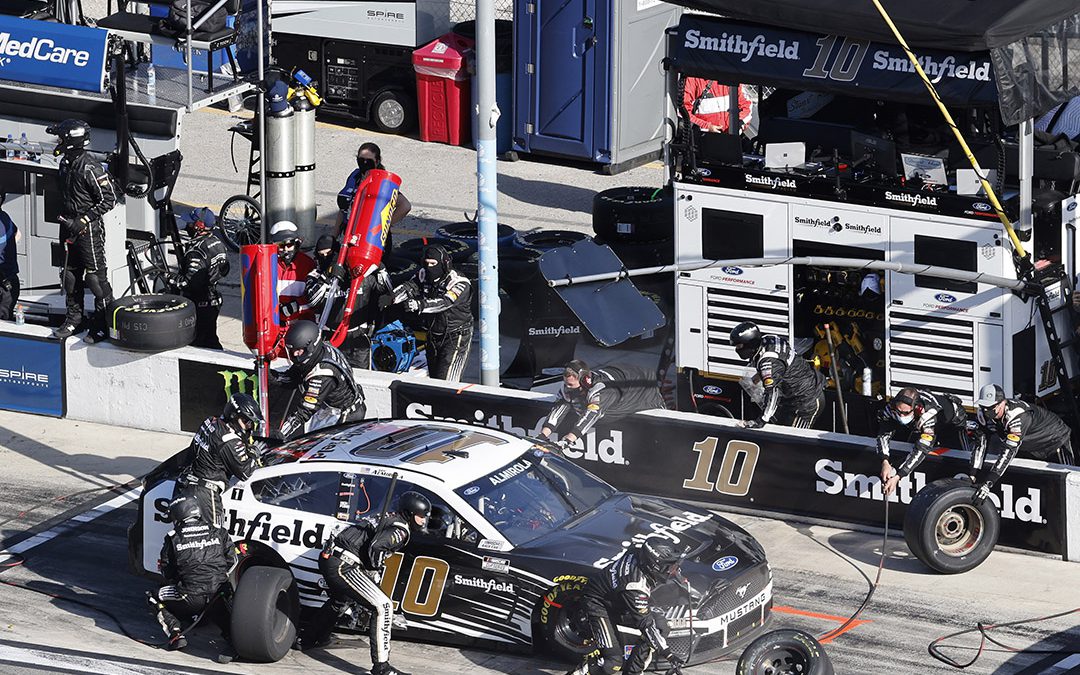 Stage 1 Recap (Laps 1-16):
● Aric Almirola started 26th and finished 17th.
● Almirola cracked the top-20 just five laps into the race.
● During a caution on lap 12, Almirola said he needed more forward drive. He pitted and restarted 17th.
● The Smithfield driver pitted at the end of the stage for four tires, fuel and adjustments.

Stage 2 Recap (Laps 17-34):
● Almirola started 21st and finished 11th.
● The No. 10 Ford driver cracked the top-15 on lap 25.
● He said his drive off of the turns was better.
● During a caution on lap 28, Almirola pitted for four tires, fuel and adjustments. The Smithfield pit crew advanced the No. 10 Ford three spots on pit road.
● On the restart the No. 10 suffered nose damage but had raced up to 11th before the stage ended.
● Almirola pitted at the end of the stage. The team opted to keep track position and did not repair the nose damage.

Final Stage Recap (Laps 35-70):
● Almirola started 10th and finished 17th.
● Almirola raced to ninth by lap 41.
● On lap 45, he spun off the track in the infield and rejoined the field in 21st.
● The caution was thrown for weather on lap 57. He pitted for four slick tires and fuel to restart 16th.
● Almirola’s car became loose on the restart, demoting him to 33rd.
● The No. 10 Ford driver persevered and aggressively drove his way back inside the top-20 before the checkered flag waved.

Notes:
● Christopher Bell won the O’Reilly Auto Parts 253 to score his first career NASCAR Cup Series victory. His margin over second-place Joey Logano was 2.199 seconds.
● There were eight caution periods for a total of 12 laps.
● Thirty-two of the 40 drivers in the race finished on the lead lap.
● Denny Hamlin leaves Daytona as the championship leader with a 12-point advantage over second-place Logano.
● Almirola’s 17th-place result bettered his previous best finish on the Daytona road course – 24th, earned last August.

“Our Smithfield Ford team showed a lot of improvement today for our road course program. Our pit crew did great, and Buga (Mike Bugarewicz) and the team brought us a fast Ford Mustang today. We improved a lot on our road course program. I spun out there in Turn 3 when my tires hit the rumble strip and it snapped me loose. We made minimal mistakes today, but that set us back later in the race. We had them beat in areas we weren’t able to beat them before – even with some nose damage. We need to head to Homestead and get some stage points and get ourselves a good finish, but I’m looking forward to seeing where our road course program goes.”

Next Up:
The next event on the NASCAR Cup Series schedule is the Dixie Vodka 400 on Sunday, Feb. 28, at Homestead-Miami Speedway. The race begins at 3:30 p.m. EST with live coverage provided by FOX and SiriusXM NASCAR Radio.