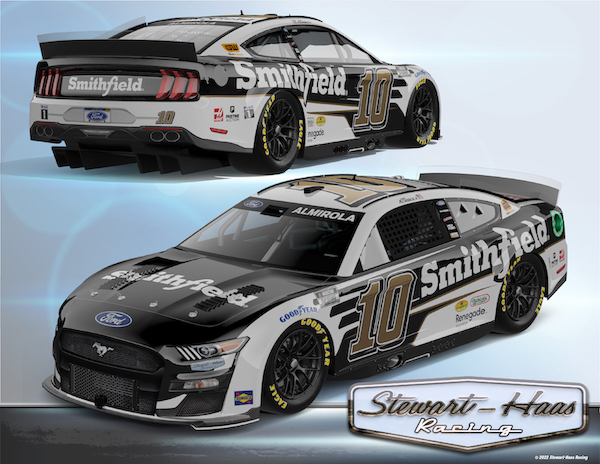 ● History at Daytona: Almirola scored his first career Cup Series win in the rain-shortened July 2014 race at Daytona, when he led 14 laps. In the NASCAR Xfinity Series, he started on the pole in his first Daytona outing in July 2007, and he captured a win there while piloting the No. 98 Biagi-Den Beste Ford Mustang in July 2016. Last year, he won his Duel qualifying race for the Daytona 500 for the first time in his career. Almirola also has three Daytona starts in the NASCAR Camping World Truck Series with a best finish of 12th in the 2010 season opener. Almirola finished fifth in this year’s season-opening Daytona 500.

● In the 2018 Daytona 500, Almirola was a half lap away from becoming a Daytona 500 champion. As he was leading the field to the checkered flag, he made an aggressive block on the No. 3 car of Austin Dillon before he was turned into the outside wall, ending his bid. In last year’s Daytona 500, Almirola showed strength by running at the front of the field on occasion, but his day ended when he was caught in a multicar accident on lap 190.

● Playoff Points: The No. 10 Ford driver sits 19th in the playoff standings, 219 points behind the top-16 cut line. With Saturday night’s race bringing the regular season to a close, Almirola and the No. 10 team’s only path to the playoffs is with a win.

● Driver Points: Almirola arrives at Daytona 18th in the driver standings with 560 points, 362 out of first.

● One More Time: On Jan. 10, Almirola released a video on his YouTube channel announcing his retirement from fulltime NASCAR Cup Series racing after the 2022 season. This year marks Almirola’s 11th fulltime Cup Series season. The official press release can be viewed here.

How do you race this weekend knowing you have to win to make the playoffs?
“You take more chances and you put yourself in positions you wouldn’t typically put yourself in – especially when it comes down to the end of the race. Typically you try to win the race, but I think on a normal day if you can get out of there with a top-five finish and some good points, then you take those in and you always weigh out that risk versus reward. Right now, as we go to Daytona for the final race of the regular season, you’re willing to go with extremely high risk because the reward is extremely high. It’s the last opportunity to get in the playoffs.”

How do you formulate a plan with how tight the racing is at extreme speeds?
“You have different ideas multiple times per lap. That’s the crazy thing about superspeedway racing. I would relate it to a quarterback going up to the line of scrimmage and calling an audible once he sees the defense, but he’s going up and only looking at one defense. We’re on the racetrack with 39 other defenses and everybody else on the racetrack is making moves and you have to adjust what you’re doing. You have to react based on what they’re doing and you’re trying to make the move that’s best for you to put yourself in the best position. You’re constantly calling audibles and it’s mentally draining, but we’re trained for that amount of focus and concentration.”

What do you remember about Daytona growing up as a kid?
“Daytona is a home track for me. I grew up going to kart week with my family after Christmas and I remember seeing how big of a deal this sport is. To look back now, knowing that I made it and have had the opportunity to race here every year is humbling. It’s just a special place that kids dream of. To have turned it into reality is a dream come true.”